Located north of Yalta on the Crimea peninsula, the Polyana Skazok Museum (Glade of Fairytales Museum) is an outdoor site of over 300 sculptures, all relating to fairies and folk tales ¹.

Currently a top amusement park in Crimea, it has its origins in a simple fairy tale garden, created by a Russian self-taught artist, Pavel Bezrukov ².

Bezrukov was born in 1890 in a family of fisherman that lived in Eisk, a port city by the Black Sea in the south of Russia. Already as a young man he demonstrated an artistic talent, especially in the field of wood carving.

However the family couldn't afford an education at an art school, so the young man somehow trained himself in wood working, using as examples the old houses and peasant farms, traditionally decorated with carved porches and architraves.

In the late 1920s Bezrukov succeeded in participating in art expositions.

When in the 1930s he got tuberculosis, he moved to the Crimea to seek recovery. Staying on various locations, he would finally settle in a green, mountainous area north of Yalta, where he recovered from his illness.

Bezrukov, a self-taught artist,  all his life has somehow been active in wood crafting, however it probably was at some moment after he returned home after World War II, so at a time he already was in his late fifties or early sixties, that he began exposing these sculptures outside his house.

Anyway, during the 1950s Bezrukov displayed such a number of wooden sculptures around his house and on a nearby field, that in 1960 the Fairy Tale Garden more or less officially became a public attraction.

The fairy tale garden became famous, it was a beloved place, visited by a lot of people, both locals and tourists on holiday in Yalta.

Children liked to come and learn the stories from folklore and fairies, as represented by the various sculptures.

The black and white pictures, from the collection of the current museum, give an impression of the kind of wooden sculptures Bezrukov made: Tara Bulba, Vasilisa the beautiful, and of course Baba Yaga (her hut was also present on the premises), Pinocchio.....

Wen the Glade of fairy tales had existed for some ten years, local artists had a dispute about the site  with the local authorities. I couldn't fully figure out what exactly was the issue, but it probably had to do with their position.

There was a threat that the site would have to disappear, but public opinion did not accept this and the the authorities had no choice but to give the site a formal position and organize it as a public attraction, where artists other than Bezrukov could also contribute.
The new garden got sculptures and constructions made by various professional sculptors from the then USSR, a collection that grew to over 300 exhibits representing the work of some 45 authors. 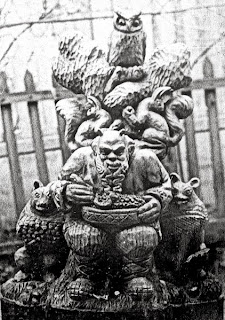 Pavel Bezrukov took no part in these developments. After the transformation of the garden into a ublic attraction he returned to Moscow, where he died in 1978, almost 90 years old.

The new fairy tale garden, with an area of several hectares and over 300 sculptures/sculpture groups, became one of Crimea's popular attractions. On the garden's former website Bezrukov was payed tribute.

Documentation/more pictures
* Website Beauty will save with a series of pictures of sculptures by Bezrukov and others in the Glade of Fairytales
* Website (2011) with a review and a lot of pictures of the Glade of Fairytales
* An official website of the open air museum was available when this post was first published in 2013. Currently (2020), the Open Air Museum Glade of Fairy Tales is on Facebook, it has an entry on VK with a referral to Bezrukov and it is on Instagram, with a variety of pictures
* Article (in English) on website Discover Ukraine (published before Crimea became Russian)

notes
¹  I learned about Bezrukov from a post in 2013 by Bruno Montpied on his weblog
² This blog has some other examples of amusement parks that grew out of activities of a self-taught artist, Wim de Vries (Netherlands) and Frantisek Jáich (Czech Republic). In a more modest sense, this also applies to the sculpture garden of Isidore Kriesten (Poland)