Very occasionally it happens that someone who at a young age creates fairy tale characters, sees happen that these creative activities result in a venue for public entertainment. This blog has Frantisek Jáich from the Czech Republic as an example.

Now here is the story of Wim de Vries from the Netherlands. 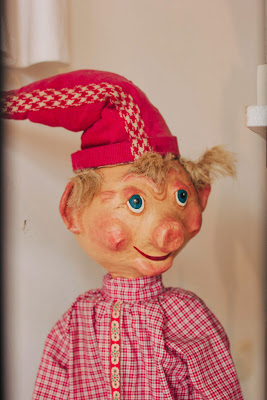 De Vries lived in the community of Enkhuizen. He had a job as a house painter and he managed
a hobby shop, where he sold children's furniture he decorated himself with gnomes and mushrooms.

In the early 1970s he began creating gnomes and fairytale characters, as in above pictures, which he displayed in a stall on local touristic summer markets.

The 1973 touristic market was a landmark in de Vries' creative career. In that year he presented kind of a mini town of self-constructed small wooden houses peopled with gnomes and fairy tale characters, all together a mini art environment and an amusement park in the making.

The concept proved successful, the mini fairy town traveled to other touristic markets in the country, it developed in the late 1970s into a summer festivity in a large tent in an Enkhuizen parking lot and in 1981 it got a permanent location in a public park in Enkhuizen, where it stayed until 1990.

The location amidst a residential area was not very fortunate for the ever growing amusement park, that attracted many buses with schoolchildren, so in 1991 the city provided a new location in a recreation area just outside the city center, initially 2.5 ha (6.2 acres), then growing to the nowadays 7.5 ha (18.5 acres)

Nowadays Fairy Wonderland offers its young visitors animated scenes of all famous European fairy tales, it has a fairy castle, a petting zoo, a maze and attractions such as small boats and little trains.

No large scale roller-coasters and the like. All in accordance with children's world of imagination. 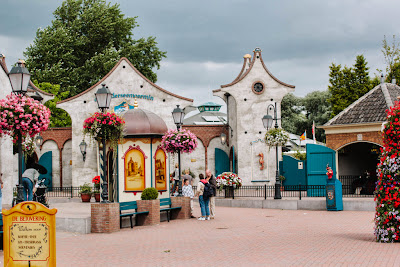 When this post was edited (2013), Wim de Vries was still present daily at the site, but the enterprise was managed by his son Mathijs.

Consistent with the genesis of the park, all new scenes and characters are developed, created and manufactured in-house.

Sprookjeswonderland
Kooizandweg 9
1601 LK Enkhuizen, Netherlands
open in summer and around Christmas
Posted by henk van es at 11:57 AM