Biagio Lapolla¹ (b. 1934) probably by tradition had one or two scarecrows in the kitchen garden of his property in the Italian community of Matera (Basilicata) 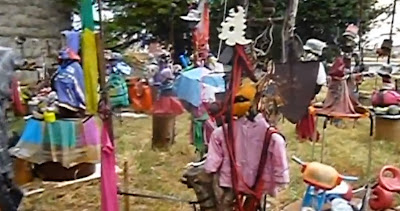 He worked for some thirty years at a nearby company that processed grain, and in 1981 he got retired.

It so happened that Lapollo then made or reconstructed some scarecrows for his vegetable garden.

This triggered him to continue, but then in a creative way by garnishing the constructions in colorful clothing. This resulted in a garden with dozens of multicolored scarecrows, all made from discarded material and used clothing. 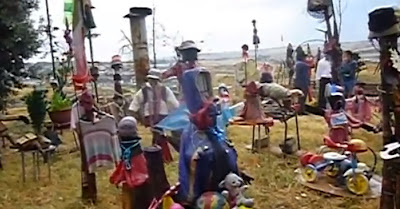 Lapolla regularly changed the arrangement of the items in the garden, which constantly provided a lively and colorful appearance, often to the delight of car drivers on the main road coming across the site.

Around 2016 Lapolla, probably because of his age, stopped caring for the site. which meanwhile doesn't exist anymore.

note
¹ I would like to acknowledge that this post is based upon the information in the website Costruttori di Babele, edited by Gabriele Mina, up to now the only internet source that has documented Lapolla's art environment.

Email ThisBlogThis!Share to TwitterShare to FacebookShare to Pinterest
Labels: site with scarecrows