On the corner of two streets in the small community of Sant Joan les Fonts (Girona area of Catalonia, Spain), a house distinguishes itself from the other houses in the street by its lush vegetation around and the many sculptures that decorate it.

Life and works
.
This is the house where Joan Sala (b. 1942) lives and works. Born in Sant Privat d'en Bas, Sala married in 1967 and settled in nearby Sant Joan les Fonts.

The couple had acquired a plot of land at the outskirts of the community and being a mason, it was no problem for Sala to build a house on this plot. He constructed it "on the go", saving trees that already were present on the plot, one tree now growing through the balcony.

In the mid 1990s, when he was in his fifties, Sala began making sculptures.

Although he had no formal training in sculpting at all, he rather soon managed to master sculpting techniques and he would work with hard, difficult to process rocks like basalt and granite. Some of his sculptures got a spot in the public space of the town, such as the ensemble La Familia, pictured above, that embellishes a roundabout near his house, and the ensemble Las Amigas, pictured below.

Up to now (2013), Sala has made almost a hundred sculptures, including large and elaborate ones.

In 1998 Sala began decorating his house, by adding sculptures to the exterior. The main entrance on the carrer Josep Ballvé (above) has a number of these sculptures.

Around the corner , in a side street, one can see sculptures added to the exterior wall: some upright standing sculpted persons from cement with blue mosaic (among whom Gaudi?) and a large white sculpture of a lying young woman in a classical pose, situated above an entrance door.

On the roof (not pictured here) there are high rising decorated columns that support bird-nests, with a lot of birds (storks?) around.


And then, in front of the house, across the street, amidst thicket, there is another set of sculptures

Transforming a house into an art environment from 1998 until now, is a rather long-term construction process, similar to the time other outsider artists spend making their creations. Reporters who in 2001 made a TV program about Sala's art environment, named it l'altra Sagrada Familia, the other Sagrada Familia, referring to the Barcelona basilica which is under construction for years and years.

Actually, Sala has made a sculpture depicting Gaudí and the Sagrada Familia. 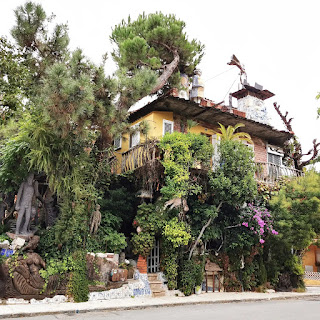 The picture above, made in October 2021 by Tiramisu Bootfighter, who traveled through Spain in the context of his project La Valise, Galerie Ambulante, shows that the site at that time still was in good condition and that the overgrowth of the house had increased considerably
Documentation/more pictures
* Joan Sala's Facebook page, with pictures of details of the house
* A thorough review of the site and its author in Jo Farb Hernandez, Singular Spaces, 2013; a short version of this article on website SPACES
* A series of pictures made around 2012 on weblog Mi Mundo Amajaiak (October 9, 2012)
* A series of pictures made in 2018 on weblog Herault Insolite (May 30, 2018)
Videos
* Scenes of the site (2014) on the Provincia de Girona (Catalunya)  trip video by
Serflac (YouTube, starts at 21.13, cannot be embedded here)
* Video, an interview with Sala, in Catalan (12'33", YouTube, September 2013)

Email ThisBlogThis!Share to TwitterShare to FacebookShare to Pinterest
Labels: garden with sculptures from stone, varied decorations on exterior walls