His father, grandfather and great-grandfather were blacksmiths, but -as his father said- nowadays this profession wouldn't offer him a perspective. So André Debru became a service technician, caring for the machines of the farmers in the area.

However, the craft of the earlier generations definitely has influenced him to process metals into artistic creations. It has been reported that as a boy of eleven he already used iron leftovers to make some creative construction.

While working as a mechanic he collected all iron items and leftovers he could lay his hand on, to process these items into creative constructions.


In 2002 Debru decided to definitely settle as a (self-taught) metal artist, a  ferronnier d'art.

He has his workshop just outside the small community of Les Costes Gozon, in the countryside of the Aveyron area in France. It is crammed with a stock of all kinds of iron objects and components which he might use in his creations. 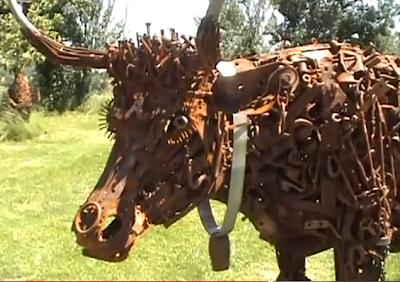 In front of the workshop and on the grassland at the side, a number of his sculptures are exhibited. Some are rather big, such as a giraffe, a rhino, an elephant, a bear, a bull, the Obelix and Quixote characters.
As the pictures show, Debru puts his creations together by assembling a lot of smaller items and elements. He arranges these in such a way that the resulting composition is a rather realistic representation of the animal or the personality. In this way, for example, the body of the monumental elephant has been made from thousands of small squares of metal.. 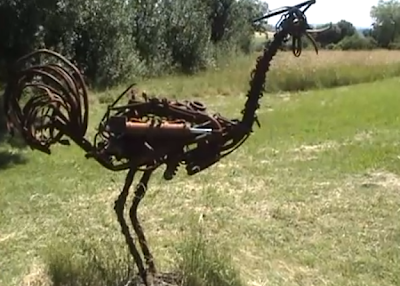 The workshop is open to visitors when Debru is at home. He gladly will inform them about his activities.

On a blackboard against a wall it is announced that one is visiting the Debris of Debru....a rather humorous approach to his work, which also can be seen in other expressions of the artist. 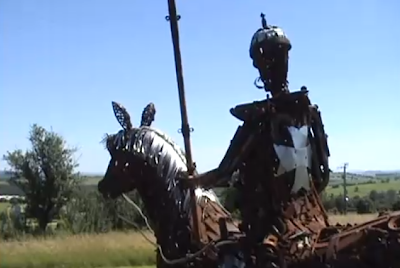 Sculptures in public space
In the course of the years a number of Debru's larger creations have got a place in public space. One remarkable job, commissioned by the town,  was the decoration of a roundabout in Roquefort (where they make that famous cheese...)

Debru created an ensemble depicting a shepherd with a flock of (chrome) sheep.