The picture above shows a number of houses in a small social housing project south of Boulogne in France, dating from the 1960s.
One of these houses has an abundantly decorated exterior, displaying both mosaics and all kinds of figurines, self-made and bought on flea-markets ¹.

In 1987 Marie-José and Jean-Marie Moren, a mason, settled in this house.

Around 1998 Mr Moren, because of physical problems had to stop working and then, just to have something to do, he began decorating the exterior of the house by adding mosaics to the low wall that separates the terrace in front of the house from the street.

He also embellished this low wall with kind of arcades, made from concrete. 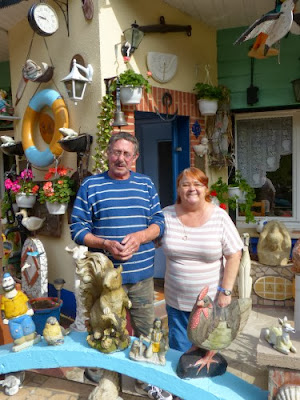 This creative activity became the Moren couple's full time passion. In the course of some fifteen years the exterior of the house has grown into an ensemble of bric-à-brac which by its large size and motley composition makes a rather special impression.

Mrs and mr Moren, currently (2013) around age sixty, spend all their time in supplementing the collection, ransacking  flee markets and garage sales in the near and distant surroundings, even as far as Belgium. 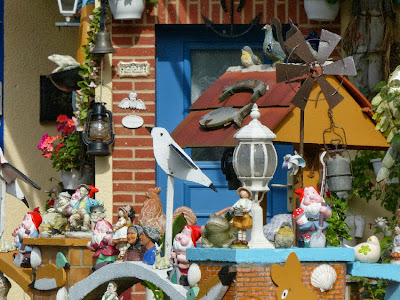 Jean-Marie Moren has also made a number of smaller creations from wood or concrete, depicting animals, some in the form of two-dimensional silhouettes, others in a three-dimensional version. 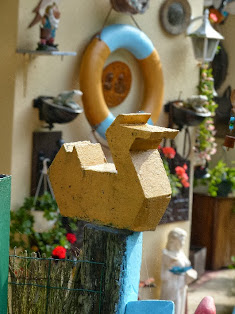 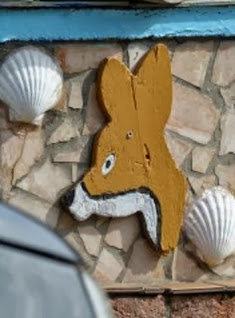 It does not happen very often, that a rented house is transformed into an art environment. In Belgium Jean-Pierre Schetz transformed the exterior of his rented house into a "corner in the sun". It was demolished by the housing company after he and his wife had died.

It remains to be seen what the future of the creative project of the Moren couple will be.


note
¹ Thanks to Laurent Jacquy who informed me about this site.