In the community of Montséret near Narbonne in southern France, an ensemble of sculptures is under construction ¹, which although there are links to outsider art, best could be qualified as an art environment.

Born in 1971 in Nîmes (southern France), Florent Hamel grew up in a disadvantaged area of the city  and had a difficult childhood. He joined the graffiti scene, making realistic pieces on walls.

In this scene it is customary to work with aliases and Hamel invented his nickname Spiktri, he currently still uses as his artist name.

Spiktri refers to spiral, carré (square) and triangle, or life, male and female, concepts and symbols which stand for two antagonists in life, the masculine (violence, aggression, evil) and the feminine (peace, love, sex, good) and in line with this his work has two axes: aggressive art and love revolution.

Although the artist Spiktri never attended art classes, he masters the art of drawing rather well. A talented, energetic artist, alongside making murals, Spiktri began working with other techniques and materials, like doing paintings on canvas and making sculptures.

Because of his experiences with street art, but undoubtedly also because of his personality, he works quickly, as if in urgency.

In creating his sculpted art works, sculpture street art as he has named it, he uses recycled material, wire, drift wood, as for example can be seen in a series of skulls on Saatchi on line.

Since the art world has not received his work in a way Spiktri liked, he decided to take an independent position and seek his own way to promote and present his work.

So in 2010 he began transforming the rather large garden of a holiday resort he owns into an art environment, a project currently still in progress. The site, spanning some 13.000 m²,  has four holiday houses which can be rented in summer. 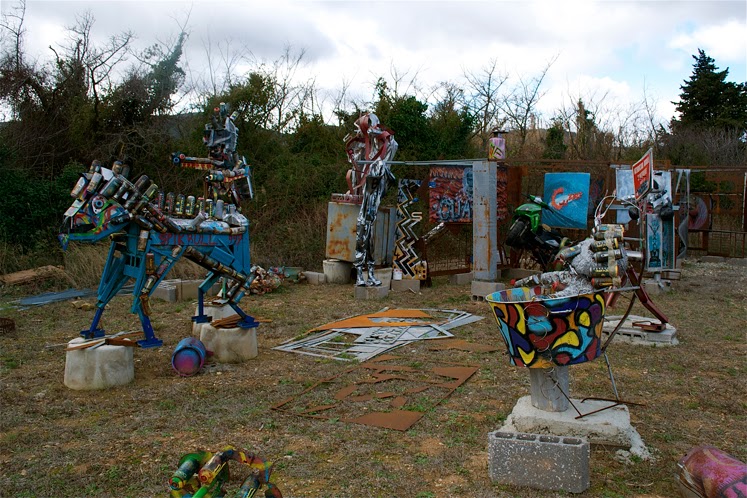 F. Spiktri is a fast working, prolific artist and the garden meanwhile has a varied collection of large, robust sculptures, mainly made from recycled materials.

The pictures give an impression. 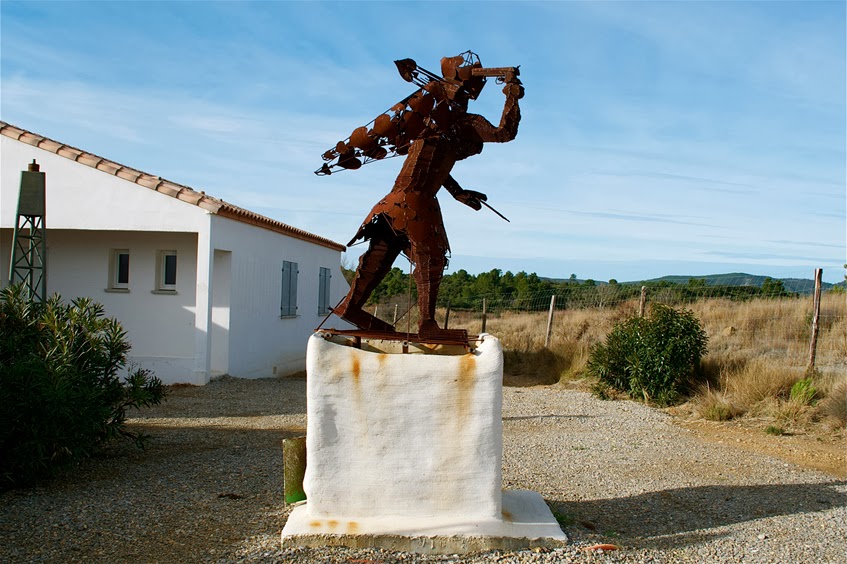 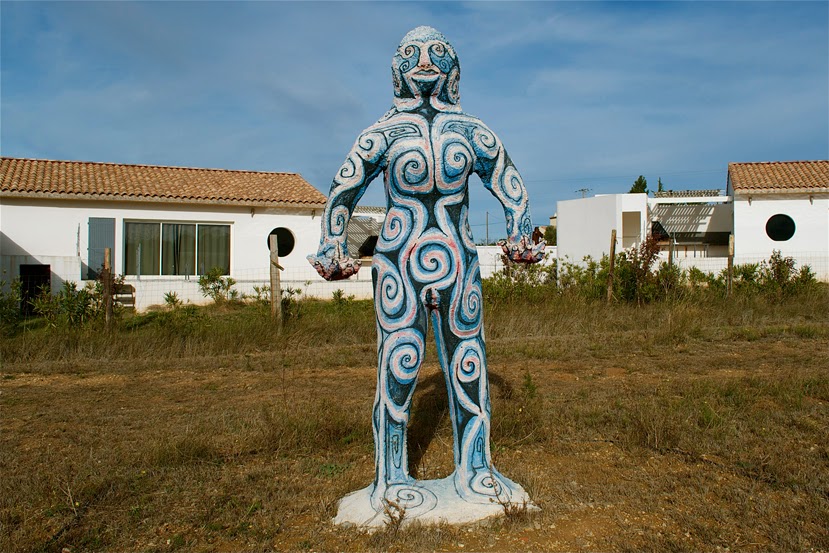 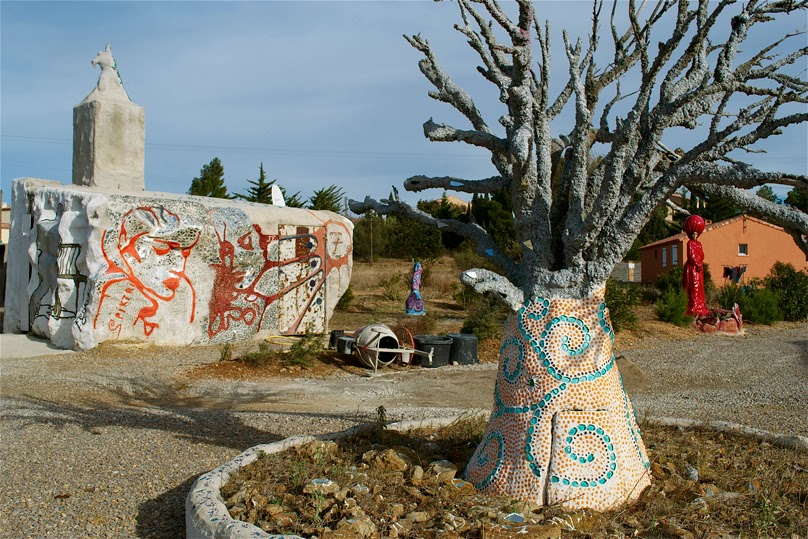 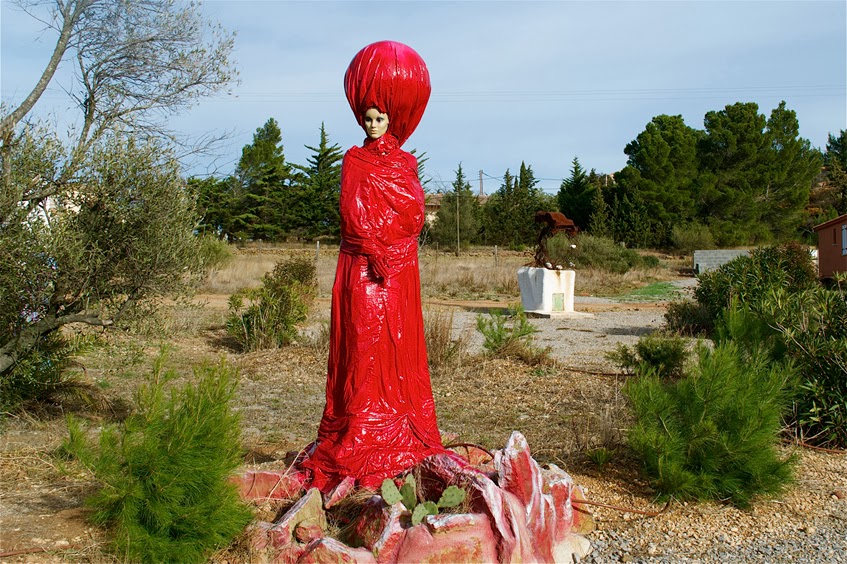 Since Spiktri is a self-taught artist, his sculpture garden could formally be classified as an outsider art environment, but I doubt if he would be happy with such a designation.

So let's say this site is just an art environment tout court, or even better, it's Spiktri's garden.
Spiktri Street Art Universe
In 2021 Spiktri started a major project. In a disused building of a wine cooperative in Ferrals-les-Corbières, the Spiktri Street Art Universe museum opened on June 1st. The museum comprises four buildings, totaling 14,000 square meters, decorated with some 2,500 sculptures and installations, divided into 19 themes, which are referred to in the museum as "planets".
One could say that this museum is an art environment with the quality of a decorated interior, but, once more, the designation street art universe does more justice to this manifestation of street art.
Documentation
* Website Jardins de Spiktri
* Spiktri's personal website
* Article in regional journal Aube Times (November 2013, in English, on ISSUU, click to page 22/23)
* Article on Jean-Louis Bigou's weblog, 30-1-2014
* Entry by Jo Farb Hernandez on SPACES website (July 2014)
* On the website of Sophie Lepetit (June 2017) a series of pictures also of various recent creations
note
¹ I am indebted to colleague blogger Jean-Louis Bigou, who pointed me to this environment and provided both pictures and information