Ault is a small community of some 4000 inhabitants in Picardy, in France, located on a cliff facing the Channel. In this area, dominated by the Somme Bay, several artists live and work who depict the beauty of its nature. The art of the artist presented in this post, however, is about emotions we all may experience, both sad and happy ones.
Life and works

Born in Paris in 1968, Caroline Dahyot got a rather religious education in an overprotected and austere setting, which increased her rejection of authority. In 1987 she enrolled at the Ecole d'Arts Graphiques, where she just went her own way. In that period she passionately decorated the walls of her apartment with frescoes.

After Paris, she stayed for some time in Nice, making illustrations for magazines.

In 2001 she settled in the Baie de Somme area in northern France, where she got a house on the rue Saint Valery in Ault.

Following her deepest artistic motivations, Caroline made all kinds of dolls and transformed the interior of the house by adding frescoes and mosaics to walls and ceilings.


Until around 2006 she absolutely had no ambition to participate in exhibitions, but that changed and in 2007 she had an exposition entitled Poupées d'amour (Love dolls) in Criel sur Mer, where she presented the puppets she had created.

It was an important happening, since here she met other artists with whom she felt akin: the world of art singulier (singular art), as outsider art is referred to in France.

That dolls played an important role in the early years of Caroline Dahyot's development as an artist can also be seen in a short film by Mickael Chevalier et Simon Copin, entitled Les poupées organiques (Organic dolls), as seen in the video (YouTube, 18 ' 41 ") below, in which the dolls appear talking and acting.


Named Villa Verveine by its former owners, Dahyot's house is located along an architecturally not very remarkable street in Ault, which is also a departmental road and thoroughfare next Ault's coastline.

Caroline felt that the facade of her house deserved some luster which she provided by adding some rows of mosaics.

Later she decorated the facade in a more striking way by adding frescoes depicting people and other representations.

However, when in the autumn of 2010 she added a more than life size representation of a young couple, Ault's mayor (probably taking into consideration complaints by inhabitants) was not amused and ordered the removal of the fresco's.

The mayor's ruling caused a lot of public debate, regional TV payed attention to it and an internet petition in favor of Caroline was organized.


Eventually the mayor agreed that the frescoes were allowed to stay.

The decorated facade is not a steady-state, occasionally the decorations will be updated.


This is demonstrated by above picture which shows the situation medio 2015. 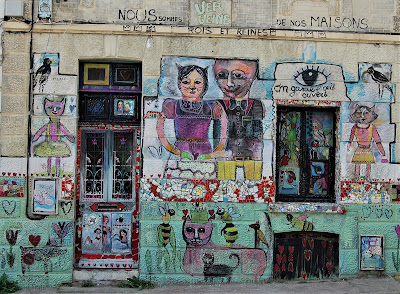 And then, in April 2020, the facade was given a new makeover, this time with regard to the elements of the door and the window, but more so with regard to the composition of the
decorations on the exterior wall in between door and window,
as shown above (pictures from Facebook) 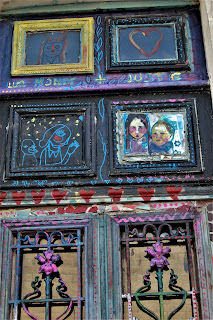 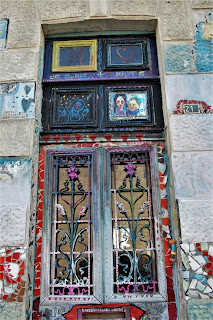 Caroline Dahyot is actively involved in the field of singular art. She took part in various exhibitions and in 2014 she participated in the first ever Festival d'Art Singulier in Belgium (april 4-5-6, Han sur Lesse)

Introducing her as participant of this festival, Iza Daussaint said that her works are "magic items with protective powers, capable of providing, restore or maintain love and family unity ..."

Exposition in 2020 in the Art et Marges Museum, Brussels

Caroline Dahyot in 2020 participated in an exposition in the Art et Marges Museum, Brussels, entitled Le coeur au ventre (The heart in the belly), 13/2-7/6/2020, where she presented a colorful installation. The video, by Gérard Rauwel, gives an impression of this creation.

Biennale Hors Normes 2021
In 2021 she participated in the Biennale Hors Normes where she presented another installation.
On Facebook there is a video (November 2021) by Patrimoines Irréguliers de France with Roberta Trapani interviewing Caroline Dahyot during this exposition. This video also has a lot of shots of Caroline's artwork. It cannot be embedded here.
Documentation
* Caroline Dahyot's weblog
* and her page on Facebook
* interview (June 2011) with Jeanine Rivais
* notes and pictures (June 2018) on the weblog of Sophie Lepetit, here, here and here
* an interview (2018) in English with the magazine Ar(t)moire (founded in 2017)