Rather far away from the urban bustle, Peter's garden is situated on a dead end road past the small community of Pobla de Benifassá in the mountainous interior of Castellón, Spain, some fifty kilometers from the coast.

Begun in 1991, this art environment has evolved in the course of the years into a major setting of paths and ponds, colorful sculptures and imaginative constructions.

Born in Germany in 1938, Buch grew up during World War II and the post-war years. He was glad to leave school at age fourteen and go to work as a gardener. but having the desire to become an artist, he went to the art school in Stuttgart. This proved unsuccessful, he was regarded as undisciplined and wasn't allowed to follow his own imagination.

So in 1960, at age 22, he left for Paris "to become a famous artist", a dream that wouldn't come true. He had to get by on small jobs and finally became a house painter.

In 1964 he met a German young lady whom he would marry and with whom in 1967 he had a son. As so many young people would do these days, the couple traveled to Greece and Formentera, living there as hippies on a shoestring, enjoying beautiful, sunny areas.

In 1970 they finally settled on Formentera, where they lived in a simple, cheap house in the fields. 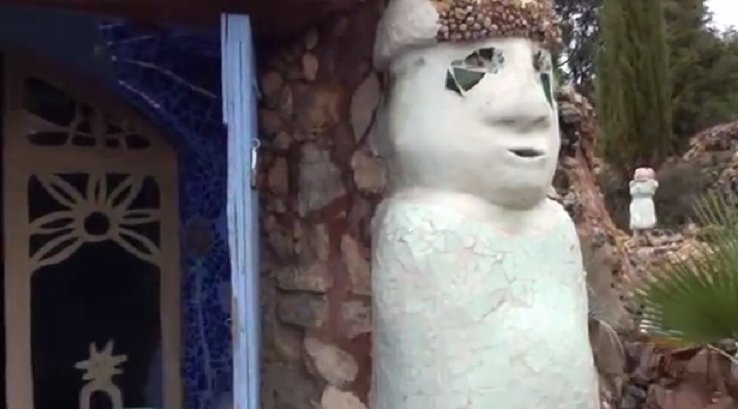 Buch, who all the while had continued making paintings, the next years had some expositions and succeeded in selling his art work. In the early eighties, apart form painting, he also began trying to work with materials such as wood, making sculptural creations.

Formentera gradually became too crowded to his sense and in 1985 Buch, who was divorced by now, visited Spain where he succeeded in finding a quite spot in the small community of Pobla de Benifassá.

With the money he had saved, he bought there a house, which he later substituted for another more quietly situated one at the outskirts of the village. He also bought a workshop and a large piece of land in a natural area just outside the village.

In the following years Buch would continue to stay in Paris and in Formentera, until in 2007 he settled permanently in Pobla de Benifassá. 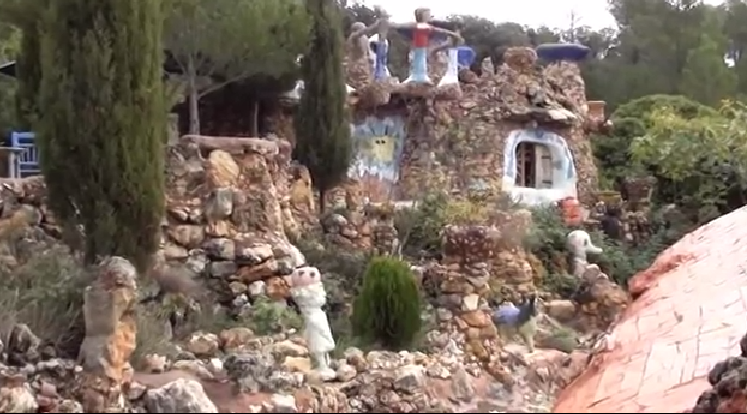 In 1991 Buch began making creations to decorate the garden. He already had begun making sculptures, but now he also gave it a try to build structures.

He had no training in making constructions at all and his first creations collapsed. A friend introduced him to some principles of construction and so the site gradually became stocked with all kind of built structures such as a bar, pictured below, named la Papallana Felic, 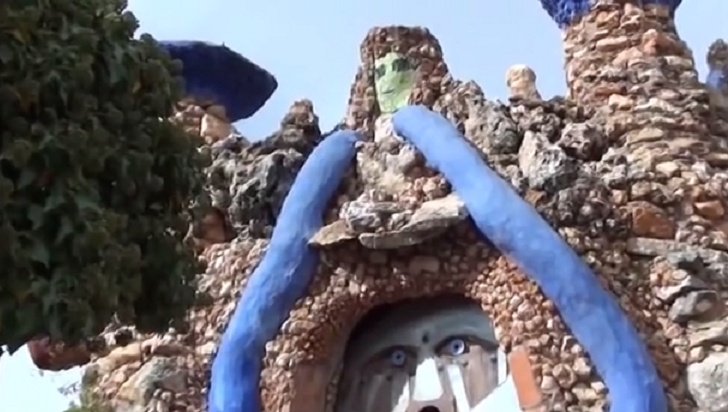 a high rising tower, pictured below, with a platform on top, 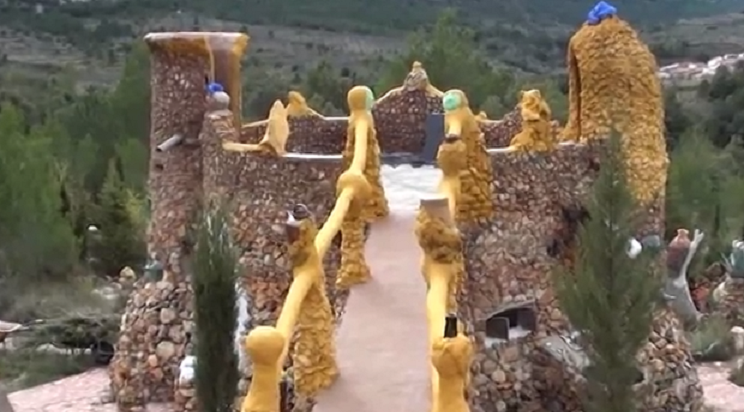 but also various monumental structures of people, such as the pregnant woman below,

and also a lot of stand-alone sculptures. Along paths and ponds, often inlaid with mosaics, visitors can walk through the garden and eventually rest on decorated benches. 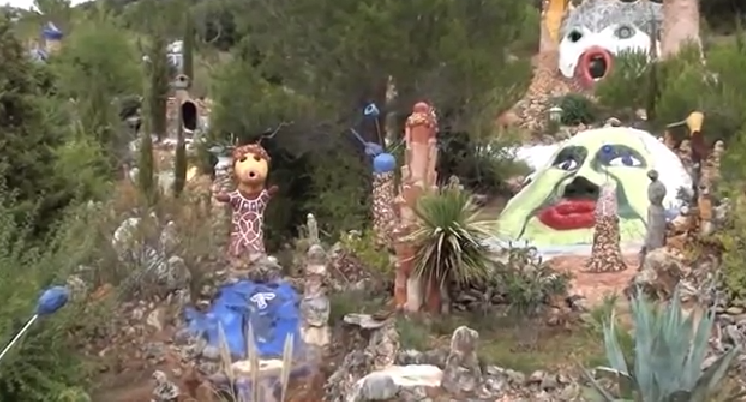 Buch can not be seen as a self-taught artist, neither does he belong to or is he interested in the world of mainstream art. In France and Italy he probably would be seen as belonging to the field of art singulier.

He is familiar with the work of outsider artists such as Picassiette and facteur Cheval, and feels inspired by such creations as Bomarzo and the Tarot Garden. 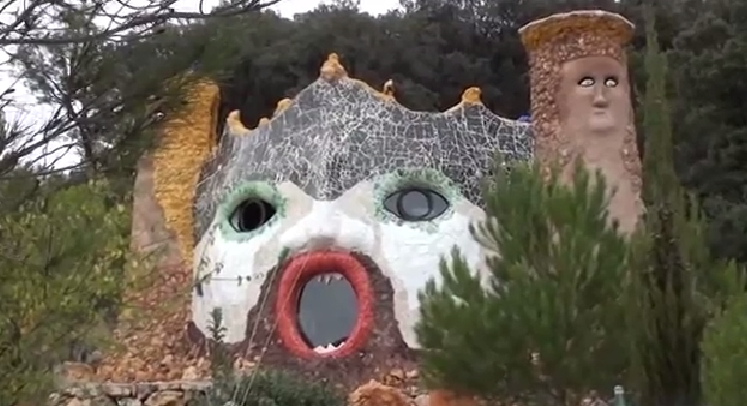 Visitors are welcome. They are asked to pay a small donation Buch will use to buy materials to maintain the garden and make new creations.

The built structures have been made without any permit from the local authorities, which up to now has not yielded any problem. Indeed, it is not impossible the authorities see the garden's potential to attract tourists, which would contribute to the local economy.

Peter Buch's garden is probably the most extensive and comprehensive (outsider) art environment in Spain. In this regard it is significant that Trip Advisor's website mentions Peter's garden and has some positive reviews.
Situation in 2021 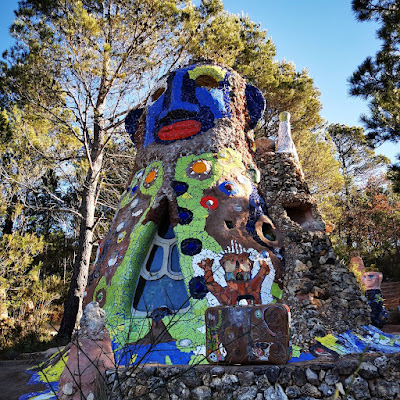 The picture above and the one below, made in December 2021 by Tiramisu Bootfighter, who traveled through Spain in the context of his project La Valise, Galerie Ambulante, show that the site at that time still was in good condition. 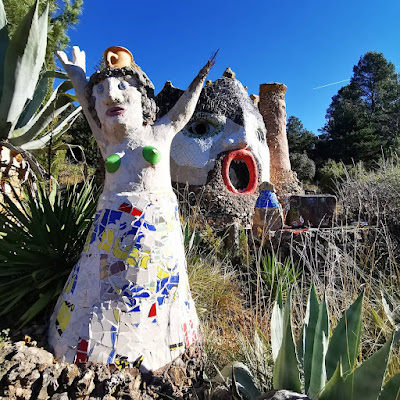 Email ThisBlogThis!Share to TwitterShare to FacebookShare to Pinterest
Labels: garden with sculptures from concrete and mosaic, singular architecture