In summer he had a job as a ferryman on the harbour canal and in winter he made little objects from painted wood and items decorated with shells he sold to tourists.

His two decorated facades currently do not exist anymore.

The first one, known as the Maison de la siréne (the house with the mermaid), was located on the Rue du Lieutenant Maurice Anger in the la Chaume quarter of the town.

The image of the shell decorated facade is settled in the minds of french lovers of art brut from the moment photographs of the decorations were first published in 1962 in Gilles Ehrmann's photo book Les inspirés et leurs demeures. (The Centre Pompidou in Paris has a collection of his photos, including the one of the facade)

This book, currently a collector's item,  was the first french coherent presentation that introduced the general public in France to a phenomenon that before that time got no public interest: common people transforming their daily environment into an artwork.

Ehrmann, who as a photographer was connected to a french illustrated magazine, used a classic glass plate camera, which gives his photographs a specific texture. The pictures probably have been made in the second half of the 1950s. 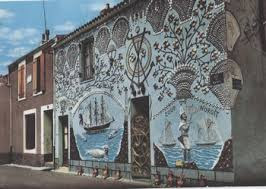 The second facade decorated by Massé, pictured above (photographer unknown), was located on the corner of the rue du Marais and the rue Bénadier.

It had an engraved bronze entrance door, adorned with an anchor and scallops This door currently is in the collection of the local Musée de l'Abbaye Sainte-Croix.

Left and right of the door the walls had frescoes with maritime scenes, with at the right an inscription saying Coupe de Noroît, which to my best knowledge means "north western gale".

As said, and as the pictures below show, the decorations on both facades have disappeared.

I could not figure out when this happened, but the pictures show really nothing has been left. Massé's shell creations inspired Danièle Arnaud-Aubin to create shell decorations on the walls of the houses in the quarter of Les sables d'Olonne where she lived.
Documentation
* Hidden in small periodicals, out of my reach, documentary information should be available, such as in Frédéric Orbestier, "La Maison d'Alice", in: l'Art Immédiat, nr 2 (1995) and in an article by Benoit Decron and Charles Soubeyran in Olona, nr 207 (2009) (periodical of the regional historic society of the area around Les Sables d'Olonne)
* Article (March 2016) by Priscilla Giboteau on website Mes Sables d'Ólonne