Louis Auffret's art environment in southern France, which currently doesn't exist anymore, to my knowledge has only been described by one author: Marielle Magliozzi.

She wrote a thesis in which she studied the phenomenon of bricolage (DIY, home crafts) in relation with outsider art, using the art environments of Chomo, Bodan Litnianski, facteur Cheval, André Bindler, Robert Vasseur and Louis Auffret, the one in this post, as examples.

Born in Bretagne in a family of farmers, Louis Auffret (1918-2006) after finishing his primary education held various jobs, to become around 1938 a sports instructor in the French army. He participated in World War II and in the French war in former Indochina. His military service took him to continents like Africa and Asia, what may have influenced his view of the world.

In 1953, after he had left the army, he settled in the community of Six-Fours-les-Plages on the Mediterranean coast in southern France.  He married and the couple got a son, but due to a traffic accident his wife tragically died in 1957. 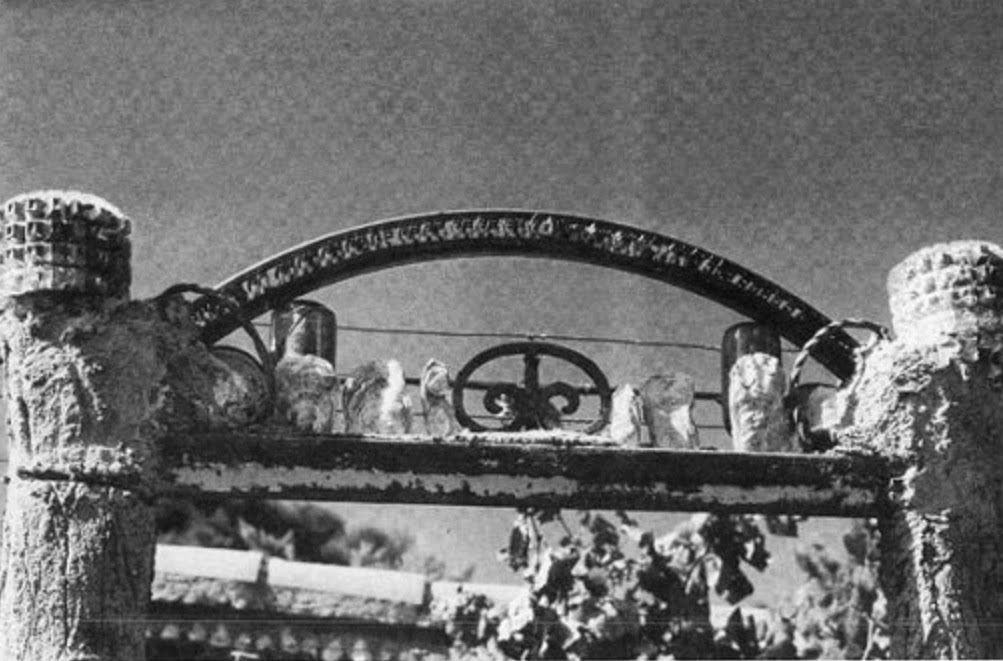 In the late 1950s Auffret began to decorate the exterior of his house, which in those years was located in a still quite and rural part of the community (Hence it's name La Campagne, the countryside).

His first creation was a bas relief in remembrance of the birth of his son, added to the exterior wall of the house, near the entrance. Using all kinds of left-over material, Auffret continued decorating the exterior of the property until it was abundantly covered with frescoes, mosaics and other adornments.

Thereafter Auffret was active for over thirty years in transforming the garden into an art environment by constructing columns, arches and other assemblies, all  provided with ornaments, small sculptures, frescoes or drapings. 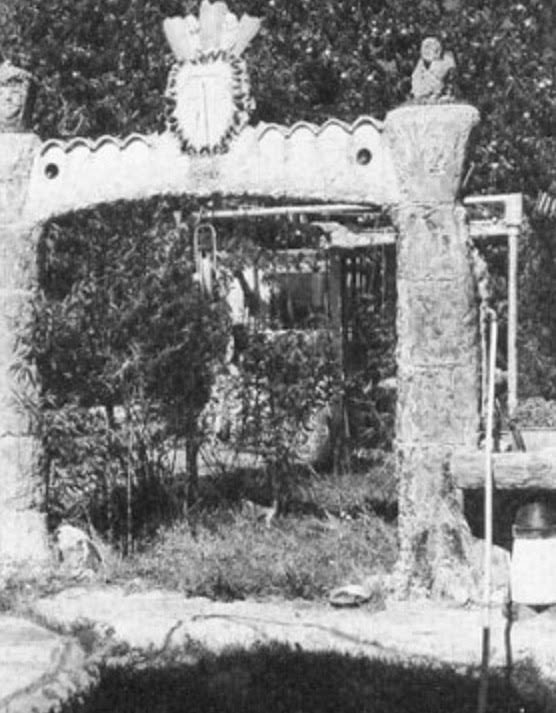 Marielle Magliozzi, who visited and interviewed Auffret in 1999, observed that the site had a number of interrelated elements scattered around the grounds, such as the dwelling house itself, some cottages, and various customized (and abundantly decorated) pleasant places to enjoy the outdoors, such as an outdoor kitchen, a porched spot with a large oven, an outdoor shower.........

The interrelation of these constructions was expressed in the corresponding ways of decorating and the use of construction materials.

When Magliozzi did the interview, Auffret's son already was living in the main house and Auffret himself stayed in the cottage. In the interview Auffret gave evidence that he and his son had different opinions about the value of a garden decorated with creative constructions.

At the time of the interview the main house already had been modernized by removing the decorations and as far as I know the decorative aspects of the garden have been removed in 2004, two years before Auffret died.

Currently, because of ongoing urbanization, the property is surrounded by houses and its rural character is history.