The Lion House, a small dwelling with fully decorated walls and ceilings, is a rather unique example of peasant folk art in southern Russia.

Located in the small community of Popovka in the Saratov area (west of the Volga river) and probably dating from the beginning of the twentieth century, the house has been decorated by an unknown person. It might be that the first inhabitant of the house was the artist or maybe a regional creator of icons has been involved.

Because of the troubled times in the region in the 1920s and 1930s, it is difficult to ascertain the history of the house and its inhabitants.

In 2009 students of  Saratov State University discovered the decorations in the cabin which was uninhibited at that time. An article in a journal about this came to the notice of Julia Terekhova, an art expert, restorer and cultural manager from St Petersburg, who in 2010 for the first time visited the site.

When she understood that the then owners planned to demolish the house (to use the leftovers to construct a sauna), she succeeded in buying it, putting the needed amount of money together with the help of friends.

In this way in 2011 the house became a private museum. It was considered to move it to an open-air museum, but finally it was decided to maintain it in the socio-cultural environment where it originated, which, considering that this kind of art in many aspects is related to its social and cultural environment, is a praiseworthy decision.

The Lion House is meant to function as cultural center. As Terekhova has said in an interview, it should be a platform where anyone can come and put in practice their idea, organize their event, keeping in mind that the event should have a public significance and will be attractive to other people.

Over the past few years there have been camps with volunteers who help maintain the site by doing repair work. Creative activities have been organized for groups of children from children homes around.

Fretwork on the exterior

The (wooden) exterior of the house has decorations of fretwork, which has been discussed in a blog by Alexander Pakhunov, entitled Observations on folk painting, which isn't available anymore.
This blog also reported that the exterior once was painted, particularly with the colors red, green and blue. In the course of the years the paint has faded away, but on some places traces of paint still exist.

Research on this issue will continue. 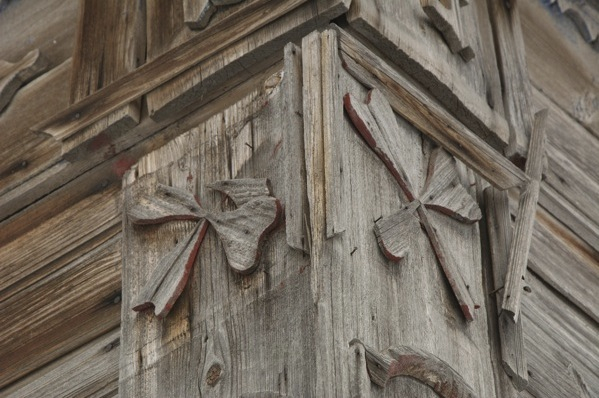 The Lion House hasn't an official status as a museum and it doesn't get any financial support from public authorities to ascertain its continuity. For this support the museum depends upon contributions of interested people around, both in terms of donations and in helping as a volunteer in doing repair work etc.

All forms of support are welcome. Refer to the website.

A cultural center added to the site

Adjacent to the Lion's House, financed by donations and sponsors, a building has been erected, opened November 2014, which will function as a visitor's and cultural center where lectures and workshops can be held and where a library is available. The center is also especially intended to be used by the children of the village.