A footpath of some 12 kilometers along rock-cut sculptures, made some 175 years ago, has become an attractive touristic route in the Czech Republic. In the field of art environments in Europe such rock sculptures are rather unique.

Václav Levý (1820-1870), who made these sculptures, was born in  Nebřežinách as a son of a shoemaker. His parents wished he would become a cabinetmaker and carpenter, but the local clergyman thought the young man would benefit more from getting an education in a monastery, probably also because at age ten he already made wooden crucifixes and carvings of the Holy Virgin.

So Levý lived in some monasteries, but when in his early twenties by chance he met a patron of art and owner of a castle in Libechov, a small town some 50 kilometer north of Prague, he went to work in the kitchen of this castle.

Although Levý at young age already was engaged in making wood carvings,  he had no artistic education at all, so it was rather an adventure when he tried his hand in creating sculptures in the sandstone rocks around Libechov. 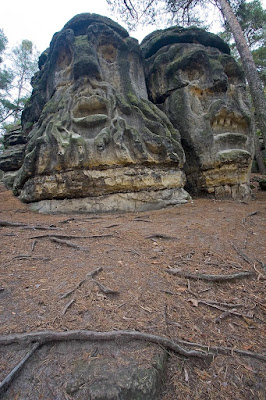 In 1841, when he was in his early twenties, he made his first sculpture in the rocks just above the small community of Želízy, not far from Libechow. It became a huge, some nine meters high ensemble of two heads with a rather fierce expression, denoted as the Devil's Head.

Of the various creations Levý made in the rocky area between Želízy and Libechov the Devil's Head is the best known , but following the footpath one also comes along Klácelka, an equally interesting ensemble with a variety of creations.

This site has a decorated cave with sculptures of dwarfs and haut-reliefs with representations of Reynard the Fox.

At the outside of the cave there are statues of legendary Czech persons (such as Jan Zizka and the sleeping Blanik knights, which however were made by Levý in the 1850s, after his study in Germany). 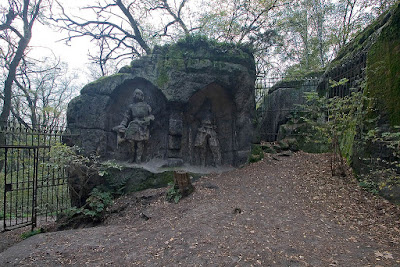 Other sculpted items on other locations along the trail include a spot with an ensemble consisting of a number of heads and a woman playing a harp. Another spot has an enormous snake in haut-relief.


Levý made these sculptures and scenes in addition to his daily activities in the kitchen of the castle.

The owner of the castle and patron of art, Antonín Veith, recognized the artistic skills of his employee and offered him a further study at his costs. So in 1845 Levý left for Munich in Germany where he studied with Ludwig Schwanthaler (1802-1848), a well-known classicist southern German sculptor.

In 1848 Schwanthaler died and Levý returned to Libechov.

In 1850 he added new elements to the Klácelka scene and later on he was active in restoring the Zákupy castle. However, when in 1853 his patron Veitha died, he left in 1854 for Rome, where he stayed for twelve years and mainly created classical religious sculptures, which earned him much fame.

After Rome, Levý stayed for a short period in Vienna, to return in 1867 to Prague, where he died in 1870 as a respected artist.

Rock sculptures in the field of art environments

In the field of art environments in Europe rock sculptures are a rather unique phenomenon. France has Abbé Fouré's sculpted rocks, in Rothéneuf along the Breton coast and la Belle Roche, made in the 1790s by Dominique Plancolaine (1745-1804).
The Czech republic, apart from Levý's creation, has two other ensembles of sculpted rocks, the one made by Vojtech Kopic, located in Kacanovy and the ensemble of Jan Hus and companions made by Stanislav Rolinek in the rocks around Hudka.

Not protected from the weather and human activities such as climbing and scratching, these ensembles get damaged in the course of time, and somehow it is a miracle these sculptures are still extant after so many years. In general authorities take no measures to protect these sites.

Documentation
* The internet has various websites which describe the trail from a touristic point of view, for example this one, with a little map

* On the website Tales of the Czech Forests by photographer Vladimir Pomertzeff a beautiful series of photos and an extensive review of life and work of Václav Levý
* Biography on Prostor website
* Article in Wikiwand
* Series of pictures on a touristic website
* Series of photos of the Devil's Head and other creations by Marcus O.Bst  on Flickr
* An article (2015) by Marcus Obst on his website, with a variety of photos
* Marie Černá,  Václav Levý, Praha (SNKLU), 1964, -125 p  ill
* Pavel Konečný and Šimon Kadlčák, Atlas spontánního umění (Atlas of spontaneous art), Prague, 2016 (ISBN 978-80-906599-1-9). p. 44-51

Václav Levý
Devil's head and other rock sculptures
along a footpath in the rocky area between Libechov and Želiziy
Mělník district, Central Bohemian region, Czech Republic
can be seen from the footpath
Posted by henk van es at 12:24 PM