Located in the north-west of Belarus, Liozno is a small town of some 6700 inhabitants close to the country's border with Russia. One can find here a modest art environment, made by an elderly lady who during a large part of her life was a self-taught artist.

Tamara Litvin (1932-2017) was born in the Pskov region in the west of Russia, near the border with Latvia. When she still was at a young age her parents moved to Belarus. She would spend her childhood and school years in the town of Verkhnyadzvinsk, the administrative center of the region with the same name  in the north of the country.

After her school days she lived for some time in Ukraine, where she met her future husband, Anatoly Fomichev, who like she was from Belarus, but was conscripted in the military in Ukraine . 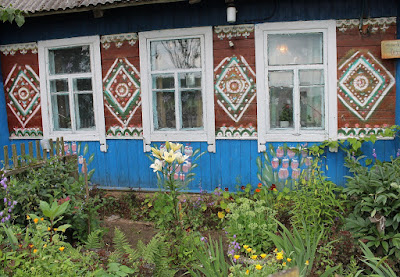 The couple returned to Belarus and settled in Verkhnyadzvinsk. In 1956 they got a son and later three daughters were born.


In 1983 the family settled in Liozno, a community in the Vitebsk region, not far from the border with Russia. Their eldest son died in the early 1980s and one by one the daughters got married and left the parental home. After her husband had become ill and died, Tamara Litvin lived alone.

Throughout all the years as a self-taught artist she was engaged in making paintings, mostly in a naive style, an activity she continued after her husband had passed away.

Moreover, she embellished the interior walls with visual art and murals, decorated the exterior walls of the house with colorful motives and added two-dimensional wooden sculptures to the garden around the house, in this way transforming house and garden into an art environment. 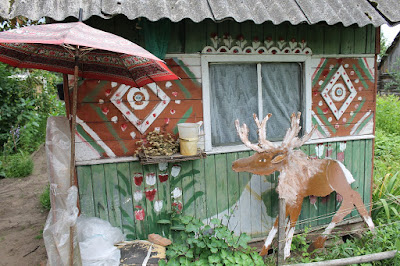 The small wooden sculptures in the garden mainly depict animals, such as a deer, a cock or a fox.

The exterior walls of the house are embellished with paintings of flowers arranged in bouquets and with painted diamond-shaped motives comparable to those one finds on traditional Russian and East-European houses and farms. 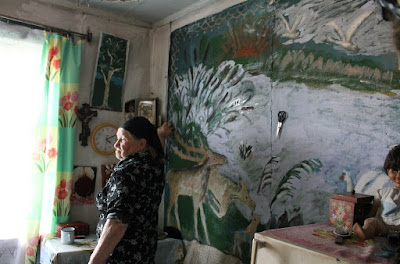 The interior walls of the house are almost completely covered with Tamara Litvin's paintings, included some rather large murals. 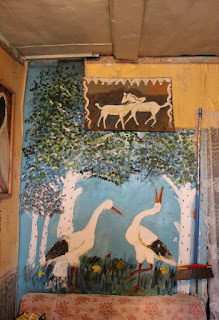 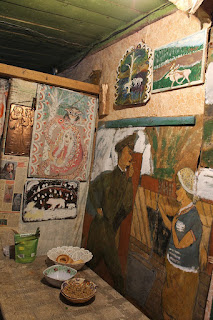 Although creating art environments in particular appears to be a male activity, fortunately Europe also has examples of female involvement.

Tamara Litvin belonged to a range of women who became known by the creative way they embellished interior and exterior of their house. Although Tamara Litvin's art environment may be modest in size, conceptually it correspondents to the sites created by Polina Rayko (Ukraine), Danielle Jacqui (France), Bonaria Manca (Italy) and Enni Id (Finland).

For a long time her visual art was only known to a small circle of family and friends. She would just give away her paintings. However, in recent years the situation changed.

In 2012 Tamara Litvin, together with artists from Belarus, Russia and Latvia, participated in the exposition of naive art Insita 2012 in Vitebsk, which was organised by local museums in cooperation with the Museum of Naive Art in Moscow (This exposition was also organised in honor of Marc Chagall who 125 years earlier was born in Vitebsk and who spent his early years in Liozno).

In 2016 she had her first solo exposition in the ArtNaive Gallery in Moscow and in the same year the gallery presented three of her paintings at the Outsider Art Fair in Paris.

On april 6, 2017 the ArtNaive Gallery announced the sad news that Tamara Litvin some days earlier had passed away