In the outlying area of Klatovy, a town of some 22.000 inhabitants in the south-west of the Czech Republic, Vaclav Rubaš's art environment, a garden with sculptures, can be encountered:

Rubaš was born in 1909 in Hodéjov near Strakonice, some 50 km east of Klatovy. After primary school he became a stone mason, a job he would have until retired.

There are no reports that he during his working life somehow was engaged in making artworks, although he liked to craft things for daily use. However, in 1988 at age 79 he made a replica of the fountain in the center of Klatovy, the town where he meanwhile had settled and lived with his family And then in 1989 at age 80 he made his first sculpture, a creation which depicted Veles (also Volos), the Slavic God of earth, water and the underworld, often associated with cattle and herds. Especially made for his daughter, the creation was displayed in the garden of the family home.

This was the start of a period of creativity which lasted for the next six years and resulted in a production of all together 27 stone statues. 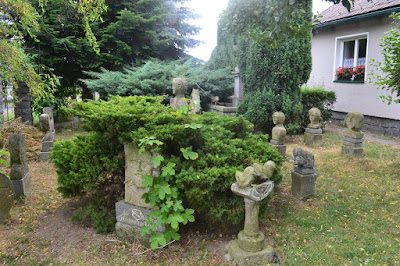 In general displayed on small pedestals, these sculptures are arranged in the garden in such a way that they face eventual visitors who enter the site.

A number of Rubaš' sculptures depict famous persons, such as Tomáš Masaryk, the first president of Czechoslovakia (from 1918 till 1935) and J.A Comenius, the Czech philosopher (1592-1670).

Other works include a Venus, busts of nymphs and various animals. 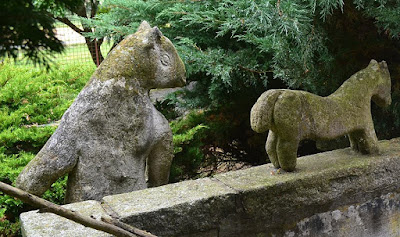 In 1996 the art gallery At The White Unicorn in Klatovy had an exposition of Rubaš' artworks, but before it was opened, the sculptor deceased (March 21, 1996). 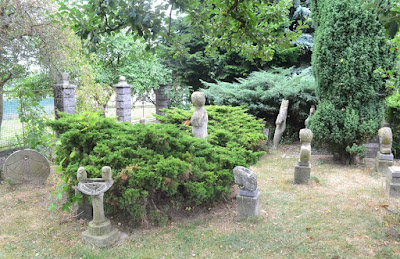 After the death of Vaclav Rubaš the family continued to live in the house and to care for the sculptures in the garden.

The site is private property and can't be visited freely. However, most of the sculptures can be seen from the street through the garden's wired fence.