Benjamin Petrovich Tabakov, a self-taught artist who decorated his house in Staropysjminsk in the Russian region Sverdlovsk, was inspired by another self-taught artist, blacksmith Viktor Nikolaevich Volkhin, who lived in the neighbouring community of Berjozovski.

Tabakov began decorating his house in 1981. At that time Volkhin, who died in 1982, already had completed the decoration of his house. 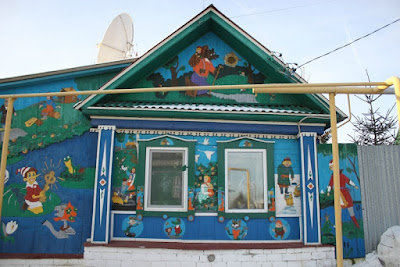 The biographical information about Tabakov is limited. He probably was born in the 1950s and he became a truck driver with a transport company. He married -probably in the late 1970s- and looked around in Staropysjminsk for a house to live in with his wife Augusta Dmitrievna, a house appropriate to eventually share with children and grandchildren.

That house, he thought, had to have something specific.

When he had seen Volkhin's house in Berjozovski decorated with pictures of fairy tales, he knew that something like that would be suitable for his own house. And so in 1981 he began. It would become a lifetime project. 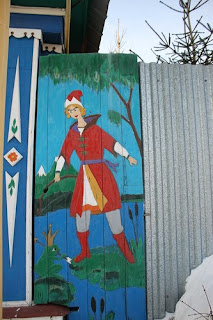 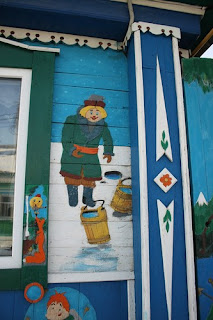 Just as Volkhin did, he painted the facade of his house with scenes derived from familiar fairy tales and folk stories.

He also referred to scenes from a popular Russian TV-series named Ну, погоди! (Wait a minute!). 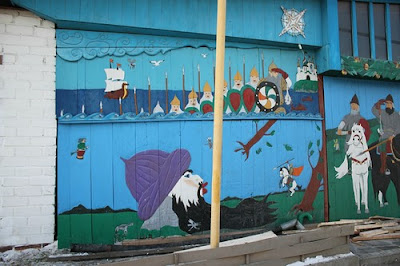 Regularly adding new scenes, Tabakov has been active in decorating his house for over 30 years.

He made photographs of all stages of the development of the facade, in black and white as it was at the time he bought the house, later on capturing each new scene in color. 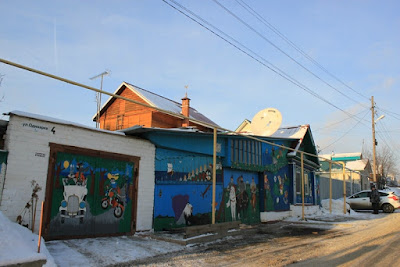 From an interview with Tabakov in 2015 it appears that at that time he still was engaged in making new decorations. Meanwhile three generations live in the house and a granddaughter occasionally helps her grandfather, as the video from 2010 (below) shows.

Documentation
* Article (may 2015) by Maxim Gusev on the website of Strana Life
* More pictures by Labiscwi on fotki.yandex