When decorated with wood carving in a traditional style, in general affixed by local craftsmen, old houses in the Eastern European or Russian countryside often have a wonderful artistic appeal. To be ranked as an art environment, however, the owner of the property himself should have designed and installed the decorations.

This happens just occasionally and so up to now in these countries such sites are not considered as a specific artistic expression and still get little systematic attention. But the times they are a-changing....

One of the first Russian art environments with a decorated exterior presented in this weblog (in March 2011) was the one created by Sergey Kirillov, the blacksmith of the small community of Kunara, some 70 km north of Yekaterinburg. 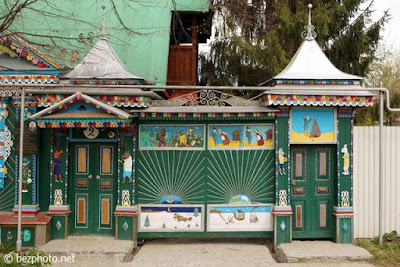 It seems that art environments get increasing attention in Russia

And now, six years later, here is a post about another blacksmith who transformed the facade of his house into an art environment and who, besides, also lived near Yekaterinburg: Viktor Nikolaevich Volkhin.

A first report about this decorated house was published on the internet in 2015, followed in 2016 by a second one (see documentation). These publications might indicate that in Russia art environments are receiving increasing attention on the internet. 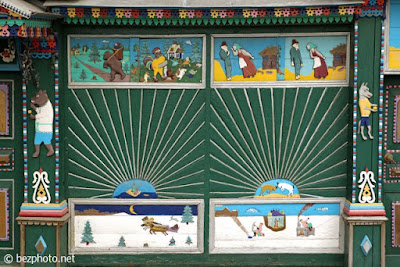 The house of blacksmith Volkhin

Berezovsky is a town of some 60.000 inhabitants in the Sverdlovsk region in Russia. The town is a close neighbour of Yekaterinburg, the capital of the region and with 1.3 million inhabitants the fifth city in Russia in terms of inhabitants.

Viktor N. Volkhin, about whom no biographic details are available, except that he was a blacksmith and died in 1982, left his home town a little gem by single handedly decorating the facade of his house.

A Russian newspaper reported in December 2019 that the house is currently occupied by the son of Volkhin's godson Oleg, who grew up in the house from childhood.

More about the exterior decorations
The front side of the house with its various components -a part with windows, a number of entrance doors with turrets and a double-door entrance gate-  has been embellished in many different ways, both with colorful wood carving and with equally colorful storytelling illustrations.

Both doors of the centrally located entrance gate have a middle part with wooden radiations. The upper and the lower parts of these doors are adorned with illustrations.

The one on top of the right door (picture above) probably is a referral to Pushkin's story of the fisher and the goldfish.

The picture of the bear with a basket (on top of the left door of the entrance gate) probably refers to the tale of the girl who gets lost in the forest, ends up in the home of a bear and by a ploy is returned to the family home in a basket carried by the bear.

The picture with the cock playing the accordion probably also refers to a Russian fairytale.

The illustrations on the parts at the bottom of the doors of the entrance gate depict snowy landscapes. 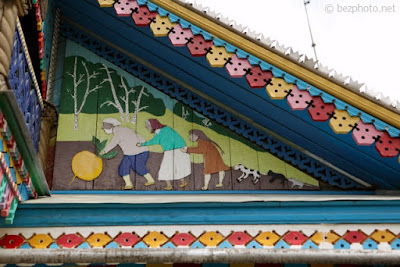 The decorations on the other parts of the facade have referrals to other Russian fairy tales and to a famous Russian animated TV series named Ну, погоди! (Wait a minute!).

The pictures published here just give a small impression of the rich totality of the decorations. 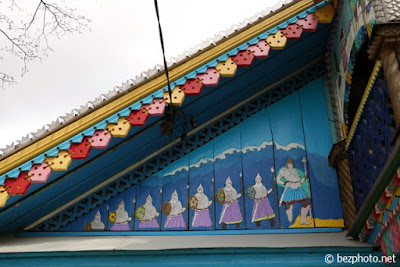 The site has a protected status

As the pictures show, the house looks well maintained. It currently is protected by the state as a monument of wooden decorated architecture. To my knowledge only the house of Sergey Kirillov has such a status in Russia.

The interior has been modernized.

Documentation
* Russian newspaper E1.ru (dec 2019) with a variety of pictures of (especially) the decorations of the house