At first sight the nativity scene in above picture looks like so many others in Europe, but on closer consideration the scene has something very special. The manger as such has its traditional scene, but around it one sees scenes of daily life in the community, depicted in a large variety of sculptures of ordinary village people.

This is the work of Alexander Forýtek, who was born in 1953 in the city of Zlín in the Czech Republic.

After his primary education he studied pedagogy and got a job as an educator. He settled in Turovice, a small community of some 200 inhabitants just outside the city of Dřevohostice which has some 1600 inhabitants.

Already as a young man, Forýtek was quite interested in visual art. He liked to make paintings, such as landscapes, portraits and still lifes, but he also tried sculpting and carving.

In the 1970's his illustrations were published in various Czech magazines.

The story of the nativity scene begins in 2001. In that year for the first time a nativity scene created by Forýtek, was installed on Dřevohostice's main square, just a traditional arrangement of a manger with the holy family, three kings and a couple of lambs. 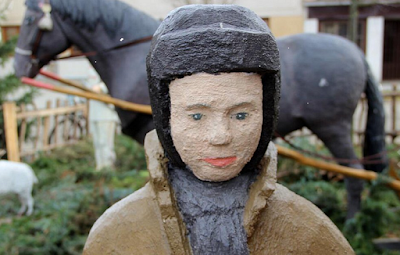 But in the following years this arrangement was gradually supplemented by a number of new sculptures, depicting many ordinary people from the city.

The municipal website says this was an idea of Ladislava Sigmunda, the mayor of the city.

The characters depicted in the sculptures include a village band and other musicians, a horse pulling a car, a miller carrying a sack of flour, a mother and her son on their way with a milk can, various small animals, and so on .... in general scenes from daily life in the community in the 1930's. 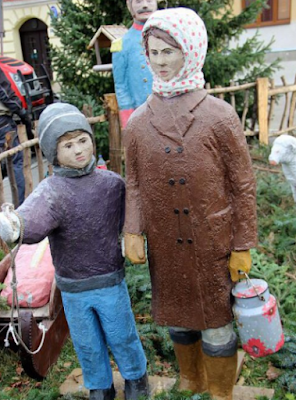 Forýtek made his sculptures in a realistic style, even so realistic that some residents of the community recognized themselves in the depicted characters.

The sculptures have a core of wood on which blocks of polystyrene are attached, which are subsequently cut into model and finished with a paint that is especially composed of glue, polychrome and paint to defy the weather.

The sculptures are very solid, even so solid that, for example, children can sit on the horse pulling the car. 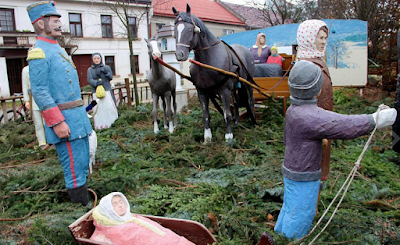 Since the first start in 2001, the site has grown in size. Every year Forýtek would make a number of new sculptures to enlarge the scene.

Currently (2017) it has reached its maximum size with an area of 200 square meters, where about forty sculptures can be installed. Forýtek does not make any new sculptures. He fell ill and lives in a retirement home in Radkova Lhota. 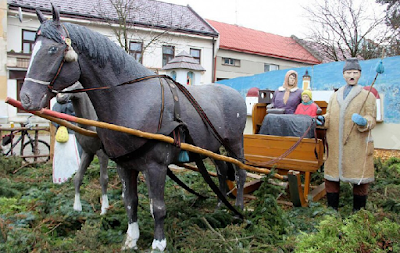 Forýtek's nativity scene will be built in early December and will remain on the main square of the city until Epiphany.

Email ThisBlogThis!Share to TwitterShare to FacebookShare to Pinterest
Labels: garden with sculptures from styrofoam, installation