The singular architecture in above picture doesn't exist anymore. The picture shows the house, located in a small community east of Moscow, Russia, as it was in its most complete appearance in the 1980s, the 1990s and the early years of the 21st century.

This house was single-handedly built by Sergey Federovich Pankratov, who was born in the early 1920s (1921 or 1922) and became associate professor in the Department of Philosophy of the.Moscow Institute of Instrument Engineering. When people asked him about his profession he would say that he was a philosopher.

In 1964, when he was in his early forties, he acquired an ordinary wooden house in the small community of Kuznetsy, a neighborhood in the city of Pavlovsky Posad in the Moscow region. A year later he got permission to rebuild the property into a stone house.

So in 1965 Pankratov began to rebuild the house, mainly using scrap metal items he bought at a discount at Electrostal (a metal factory in the eponymous city located near Kuznetsy) and bricks from a nearby landfill where stones from waste baking ovens were dumped.

The project would take 16 years, due to the special building style and the various specific elements and decorations he added. 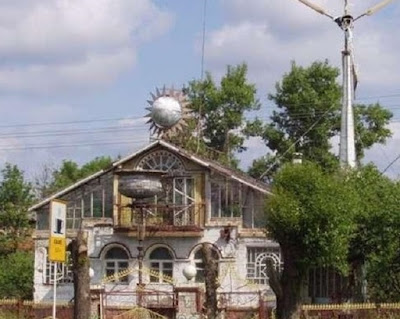 These various elements included a wind turbine supplying electricity, a rotating decorated globe on the roof, an upper floor made and functioning as a greenhouse, a facade decorated with a metal column crowned with a huge rotating flower-pot, all visible from the street.

At the backside of the house there was a rotating gazebo.

Located along the M7/E22 highroad, an important link between Moscow and Russia's eastern regions, Pankratov's singular architecture attracted much interest from passing drivers.

The wind turbine, constructed from fiberglass, epoxy resin, wood and metal, could generate 3.5 kilowatt. In 1991 Pankratov was interviewed on Moscow TV about this for these years rather unusual and very innovative facility in a private setting.

Located on the top of the roof, the globe was held in a gilded metal radius. Pankratov not only had painted the various continents on the globe, but he had also decorated these with pieces of mirror glass that shimmered in the sun while the globe rotated.

The vase in front of the house also could rotate. It could be provided with flowers, or with a Christmas tree in winter. On its side pots with flowers could be placed in twelve holders.

The loft of the house resembled a greenhouse. It had a glass roof and its 104 square meters large floor was covered with 25 cm high layer of earth in which all kinds of vegetables could grow. Via a hydraulic system the plants could be watered and to transport the harvest of cucumbers, tomatoes and so on downwards, there was something like a train of crates riding over a rails

In the garden behind the house was a gazebo, kind of a garden house. It had twelve seats and this structure could also rotate, one full turn in a minute. Eppur si muove (And yet she moves)

In the 1980s and 1990s, when the site was in good condition, buses with tourists from Moscow would drive past the house, which was also included in touristic guides. Pankratov would welcome them if they wanted to see the house and he liked to talk to them about all kind of philosophical topics, all the more when he had retired in 1989.

Perhaps in these talks Copernicus came up too and maybe his alleged remark Eppur si muove was jokingly related to Pankratov's preference for all that rotates....

Pankratov never married. The women he loved married someone else. He lived alone and around 1998 it has been reported that the house as such was not equipped for a comfortable life, as it lacked furniture and had a desolate appearance.

Pankratov wouldn't care about this, since all his energy was directed upon developing his installations.

A reporter who wrote an article in the Rossiyskaya Gazeta (October 2014) says that he "finally realized: everything here is the fruit of the restless imagination and tireless imagination of the author, everything is interesting, unusual, original. Everything is outlandish for a visiting guest, like me, all for the astonished look of an outsider. But not for normal human life"


In the new century the site began to fall in decline

Above picture of the house was made in April 2008 and it shows that at that time the wind turbine and the globe had disappeared. In the early years of the 21st century Pankratov reached the age of 80 and as he grew older and lived alone, he more and more got problems with the maintenance of the house and the remaining installations.

The reporter who visited him in 2014, wrote: "The house gave the impression of being abandoned long ago and looted" and he described Pankratov as an old man dressed in old clothes.

In the course of 2015 he must have died ¹, after which the heirs have "normalized" the house.

Currently seen from the outside nothing reminds of Pankratov's singular architecture.

note
¹ This is based upon a commentary on imgsrc.ru (August 2015) where it is said  that Pankratov sadly had passed away. The visit reported in the Novava Gazeta in November 2015 may have taken place earlier that year