The picture above shows some of the sculptures made by Vasily Artamonov, displayed in front of his house in Rylsk, Kursk region, Russia.

It's just a small part of the over two hundred sculptures he created since around 1995. The largest part of his oeuvre has been relocated to various places in the public space in the Kursk region.

Like François Michaud in the 19th century decorated his village Masgot with sculptures or like in
our time a collective of conscripted soldiers embellished the Russian city of Teykovo with their creations, Artamonov has the desire to brighten up the public space with his fairy-tale characters, first of all on spots in his hometown Rylsk, but in line with that also on spots in the public space in other communities in the region of Kursk.

Born in a family with six other children in the small village of Bredy in the Chelyabinsk area in the southern Urals, Artamonov studied at a school for agricultural engineering. He got a job at a farm, married and got a son. However, after a couple of years he experienced this work as too routine.

He felt more attracted to a varied, creative type of work, so he tried growing roses. This was not succesfull and he moved to the Caucasus where he worked as a driver at a small farm owned by a brother.

After his military service he noticed that he longed for the Kursk region, the residential area of his father and grandparents in the west of Russia. So he decided to go there. On the way something happened that was decisive for his further life. He saw a sculpture of a huge dragon with children happily strolling around, laughing and feeling happy.

The scene triggered him and gave him the idea  to undertake something similar. Artamonov could move into the house on Pervomaiskaya Street in Rylsk, where his grandparents and his father, all deceased, had lived before. 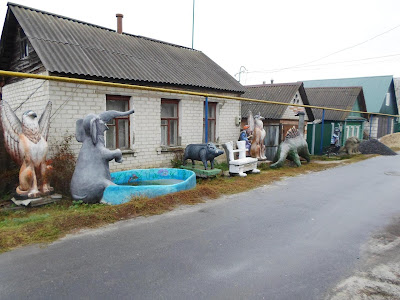 Here, around 1995, he made his first creation, a huge dragon. This one was followed by two bears flanking a bench, and a dinosaur. All creations were displayed on the narrow space separating the house from the roadway.

Artamonov's creative project was based upon a philosophy stating that if a whole city has such sculptures, life will be better. Embellish Rylsk with fairy tale characters and the city will shine, it will be a city of happiness and dreams........!

He invited the local authorities to (financially) support such a project, but at that moment they hesitated to make a decision. So Artamonov had to combine his creative activities with various jobs, such as cook, agronomist, driver, plumber and handyman. Currently he works as a guard and driver at the House of Creativity in Rylsk. 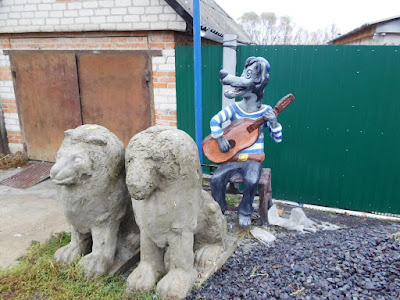 But making sculptures was paramount. During his career  as a self-taught artist of over twenty years Artamonov focussed especially upon creating sculptures related to Russian fairy tales, which for him are a source of joy and patriotism.

When making a sculpture Artamonov first makes a body from sturdy metal elements he welds together and shapes into the desired model. This basis is covered with wire mesh, after which the creation is finished with cement and/or plaster, applied layer after layer.

Creating a sculpture on the average takes two weeks of painstaking work. He works in the warm season, from May till October; in the other months the weather is too cold to work with cement.

As Artamonov's creative activities became rather well-known in and around Rylsk, his dream came true that his work would be displayed in public space in the region.

For example, one day the mayor of the town of Kurchatov, situated some 80 km east of Rylsk, personally visited Artamonov to inform if the town could buy some sculptures. This resulted in the purchase of twenty sculptures (incidentally for a modest fee), which now are displayed at a park in Kurchatov.


Vasily Artamonov is a modest man who does not care about wealth. A smiling child, enjoying his sculptures is his greatest reward. Convinced that his sculptures can contribute to a better life in the city, he relentlessly continues his creative activities.

Email ThisBlogThis!Share to TwitterShare to FacebookShare to Pinterest
Labels: garden with sculptures from painted concrete, scattered art environment, village or town with sculptures