Inmfront of a house along Soveskaya Street in the community of  Dal'neye Konstantinovo, some 70 km south of Nizni Novgorod, Russia, a number of guns are lined up. These are replicas of guns as used in the war of Russia against Napoleon (1812), single-handedly made by self-taught artist Benjamin Somov. 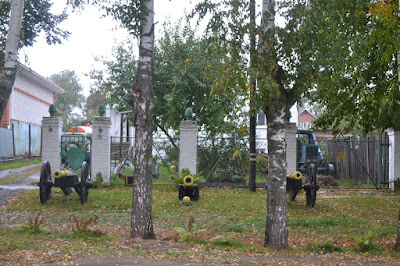 Born in 1928 in Malikova, a neighbourhood of Dal'neye Konstantinovo, Somov at a young age already showed his solidarity with the military by in 1944, sixteen years old, joining as a volunteer the Russian army and going to the front in the war with Germany.

After the war he continued for some time his military service. Then he returned to his homeland to live as an ordinary citizen.

Well, that is to say, he worked as a blacksmith and a driver, he was practicing natural healing, but what he experienced on the war front had struck him so deeply that he had to seek ways to express his feelings. 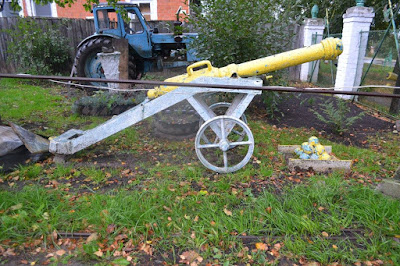 Somov found a way out in artistic activities. Although he had no training at all in making artworks (he actually had just some four years of primary education), he began making sculptures, mainly busts of military people, but also of other personalities. 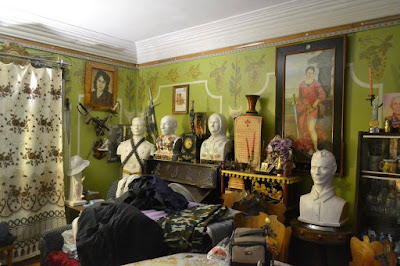 Currently, some of these busts, decorated with military attributes such as medals, insignia or ammunition holders, still are on display in the living room of the family home. 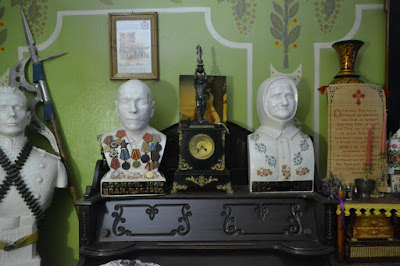 And then, watching the various guns in front of the house a bust of Lenin is on display in the garden, while on the roof a bust of a soldier keeps the watch over the site.

In retrospect one might say that the period of making small sculptures was a preparation for what would become Somov's life's work.

In the 1990s, on a field in Dal'neye Konstantinovo's neighbourhood Simbiley,  Somov began creating sculptures which ere larger than life-size. It became a memorial complex, mainly in honor of soldiers who perished in wars in which Russia was involved (the following five pictures by 4enix on touristic website turizmvnn.ru) 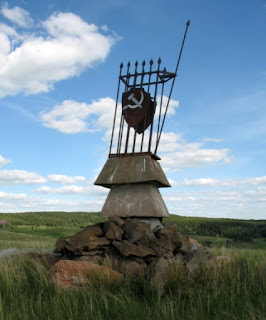 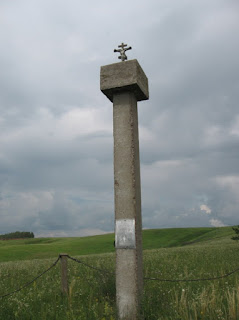 The picture left above shows one of the first creations, a pillar of reinforced concrete with a simple orthodox crucifix at the top, a monument to the victims of the Russian-Japanese war.

Top right is a picture of the monument to the victims of the Afghan war, which has kind of a grave fence and a fluttering flag. The bars of the fence are pierced, which produces a complaining sound as the wind blows through the holes. 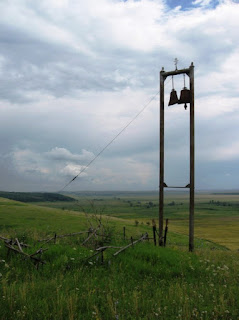 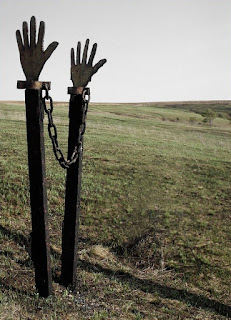 The two pictures above depict the monument to the victims of Stalin's repression.  The picture at the left shows a touching detail: two chain-cuffed hands on man-sized poles sticking out of the earth.
At the right the entire monument with in top tow flat bells which nevertheless can produce sound. 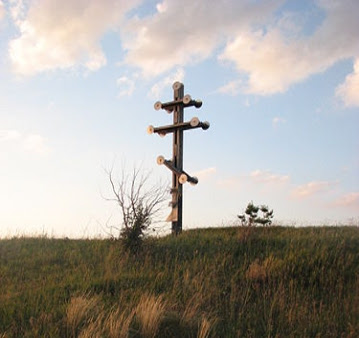 To conclude this series of pictures of the memorial complex, above picture of a rather special monument.

Somov made this monument, a huge cross with crossbars decorated with rivets, in honor of the victims of future wars and of armed struggle among civilians..... A sculpture made on the basis of such a philosophy is probably unique, not only in Russia but also elsewhere in the world.

Among the other honored people are Russian participants in the Spanish Civil War, soldiers who died during the Russian camp in Finland and crew members of a wrecked Russian submarine.

Somov made the altogether eleven high-rising sculptures at the memorial complex from surplus and used materials and he paid himself for necessities such as cement.

Both the collection of guns in the front of the family home and the sculptures of the memorial complex can be seen as art environments in their own right.

However, because both sites have the same basic theme and are based on the same philosophical view, it seems appropriate to view the totality of displayed artworks as a mega art environment, in the sense given to that designation by the Russian philosopher and creator of an art environment, Alexander Emelyanov.

In short, in Emelyanov's view most creators of an art environment act on the basis of a relatively simple philosophy which just involves the satisfaction that arises from embellishing their daily environment. However, a few creators, who seek self-confirmation by expressing themselves in artwork, operate on a more fundamental philosophical level which implies that their artworks can be denoted as mega art environment.

Somov's theme in its most fundamental version is warfare and his philosophy, which is most strongly expressed in his sculpture for the future victims of war, those that have not yet been born, seems to be that warfare is inherent in human society. True or not, it is a rather fundamental philosophical view and so in my opinion, Somov's artwork deserves to be classified as a mega art environment.


Benjamin Somov
Ul Soveskaya 151
Dal'neye Konstantinovo, Nizni Novgorod region, Russia
guns in front of the house can be seen from the street
the memorial complex near Simbiley can be visited freely
Posted by henk van es at 5:34 PM