Viewing the picture above, one might assume it represents an art environment of someone from the newest generation of self-taught Russian artists.

And indeed, Alexander Emelyanov in a recent article on the Russian website Sygma  presents above photo next to photos of facteur Cheval's Ideal Palace and of his own creation Aquaduct Tashkent and -establishing a corresponding creative signature between the three creations- he classifies the decorated building as an art environment. 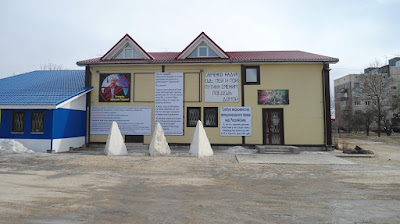 Actually, the decorated building is one of the three supermarkets owned by entrepreneur Dmitry Skurikhin, who in the ever-changing handmade posters gives his opinion on political developments in Russia.

So this site can be considered as an art environment with political messages.

Dmitry Shurikin was born on december 1, 1974 in Russko-Vysotskoye, a community in the Leningrad oblast, some 45 km south-west of St Petersburg. He studied engineering at the Baltic State Technical University "Voenmeh" and graduated in 1997.

However, in stead of choosing a technical career, Skurikhin became a businessman when in the late 1990s he bought an abandoned building where he established a supermarket. Currently in and around Russko-Vysotskoye he owns three shops.

The shop with the decorated walls is located in the village of Ropsha. Shurikhin lives with his family in another village in the region.

In 1996 Skurikhin began to manifest himself as someone with political ambitions, clearly expressing his views and not hesitating to criticize those in power. To a van he used to cross the region visiting his shops, he added stickers with political statements, which sometimes involved a confrontation with the police.

Participating in the 2009 Russko-Vysotskoye local elections, Skurikhin was elected and became a municipal district council member until 2014, a position he held together with nine members from United Russia.

In the spring of 2014 Skurikhin began working with posters. At a bus shelter he had improvised in front of his store in Ropsha, he hung a couple of posters dealing with Crimea and one about Stalin as in above picture. That construction was kind of a birthday present for his wife, who works with him as an accountant in the company that manages the three shops owned by the family.

The authorities were not amused and ordered the demolishment of the bus shelter. Skurikhin did this and then went to attach the posters to the exterior wall of the store. He has continued his creative and political activity of decorating the shop to the present day (April 2018).

The local authorities try to obstruct this activity as much as possible. In any case the police will make pictures of the posters. A sea container located near the shop, decorated with posters and graffiti texts by Skurikhin, was removed by the police.

The "pyramids" in front of the shop are anti-tank obstacles, installed by Skurikhin to prevent intrusion of the shop by the police.

The artistic potential of the posters

Apart from the political content of the posters, which is not taken into account in this weblog, it can be established that the posters in a creative sense have a strong appearance.

This appearance is mainly based on a sober calligraphy with the use of just capitals and the colors red and black, while illustrations are added only very rarely.

The attractive thing about the posters is that it is clear they were made by a non-professional.

All together Skurikhin's work might be seen as a a contemporary combination of folk art and art of propaganda.

Dmitry Skurikhin
Posters on an exterior wall
Ropsha, Leningrad region, Russia
can be seen from the street
Posted by henk van es at 9:36 AM

Email ThisBlogThis!Share to TwitterShare to FacebookShare to Pinterest
Labels: site with posters