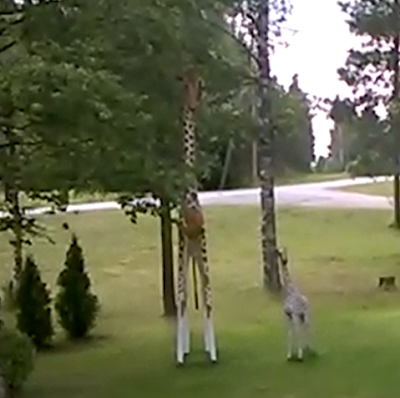 Visible from the road, a 4.75 m high sculpture of an adult giraffe accompanied by a young, makes it clear to eventual visitors that the garden full of wooden sculptures of animals in Pieksämäki, Finland, is near.

This sculpture garden, also referred to as a zoo, is a creation of Veikko Koukonen (*1924).

He had his own company in wood and metalworking and when retired, probably in the early 1990's, he wanted to continue applying his skills in woodworking, but now in a creative way.

It became a project that would keep him and his wife Leila busy for many years and which resulted in a  garden with a large collection of wooden sculptures of all kinds of animals that in Europe usually can be found in a zoo. 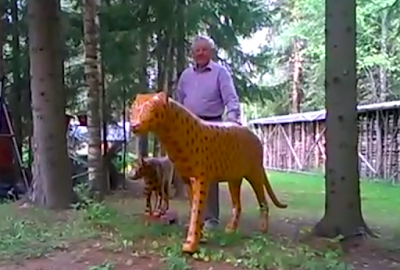 So one can see a cheetah, crocodiles and giraffes, as in above pictures, but also a kangaroo, a deer, horses and a variety of other animals, altogether some sixty items

Leila and Veikko Koukonen's house is situated in the outside area of Pieksämäki and the garden covers a fairly large area and so small groups of animals can have their own corner.

In addition to the sculptures of animals displayed in the garden, Koukonen also made two-dimensional wooden creations of animals, trees and the like, which are attached to a stone wall of the house.

And then, he also has made various pieces of furniture for indoors. 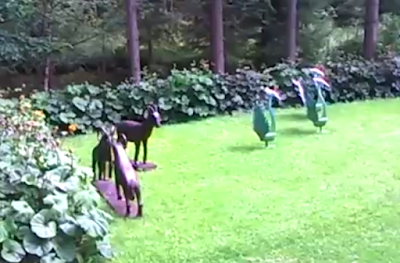 Currently in his early nineties, Koukonen is still active in taking care of the sculpture garden.

In the summer of 2017 the site was open for visitors as part of the ITE Saimaalla project aimed at tracking autodidact artists in Finland's Southern Savonia region.

In the context of this project the site will be open for visitors in the summer of 2018 too.

Lampipolku 1,
Jäpillä, Pieksämäki, Southern Savonia, Eastern Finland
in 2018 open in summer months
in the context of the ITE Saimaalla project