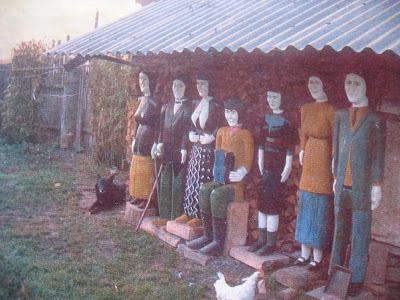 Occasionally it happens that a folk art artist makes a number of life-sized creations which he by way of storage places in his garden, thus inadvertently transforming the garden into an art environment ¹.


This could also be the case with regard to the Russian folk artist Vladimir Zaznobin (1900-1981).

Zaznobin was born in the small community of Sudenets in the Russian region Pereslavl.

He became a carpenter and settled in neighbouring Pereslavl-Zalessky, a town of some 43.000 inhabitants,140 km north-east of Moscow.

As a carpenter Zaznobin was involved in the construction of farms and houses, and on the right bank of the river Trubezh,that crosses the city, he also built his own house, where he settled with his wife Evdokia Vassilyevna. 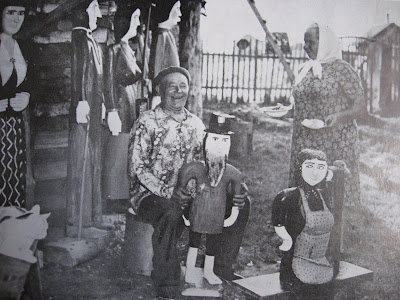 In the 1940's Zaznobin began making wooden toys, but as a folk artist he started only at an older age. As a seventy-year-old, using a knife and an axe, quite unexpectedly he started making wooden sculptures, making as he said  ".... windmills and birdhouses with funny little men and little animals that I had seen as a young boy from old village carpenters".

In addition to these creations marked by mobility, Zaznobin made a variety of predominantly small-scale sculptures with as main themes peasant life and fairy tales He also made a series of works dedicated to Alexander Pushkin.

The expressiveness of Zaznobin's sculptures apparently touched some sensitive strings in people's souls, and soon newspapers began to write about him and he became invited to participate in expositions. 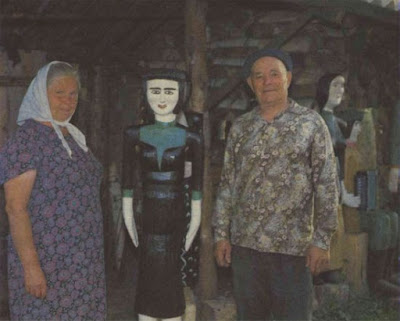 The reviews of Zaznobin's art, as far as available on the internet, almost all discuss the sculptures as such. There is only one publication available on internet that incidentally reveals something about a configuration of artworks in the artist's garden.

In that publication is said that among apple trees wooden figures and windmills on high poles reach out to heaven.

Probably not so intended by Zaznobin and in any case hardly noticed by his reviewers, with the series of life-size sculptures under a canopy, as in the first image, together with those poles capped with small creations, the garden could have become kind of a sculpture garden, or art environment in current terminology.

In 1981, shortly before Zaznobin died, part of his sculptures was bought by and transferred to the All-Russian Museum of Decorative, Applied and Folk Art (Moscow).

It is unclear whether something in or around the house currently (2018) reminds of Zaznobin.