North Ossetia is an autonomous republic within the Russian Federation, with more than 700,000 inhabitants. It is situated in the northern Caucasus, an area geographically seen as marking the border between Europe and Asia.

In this area lived Soslanbek Mikhailovich Edziev (1865-1953), a well-known and appreciated self-taught artist, who initially only in his native region and meanwhile also in the Russian Federation has become known for his sculptures, carved rods and nicely shaped household objects, such as bowls.

Edziev was born in the remote mountain village of Khod, some 70 km west of North Ossetia's capital Vladikavkaz. His father was a mason, who on the request of villagers would make gravestones. After his primary school, Edziev following in his father's footsteps also became a bricklayer. He also proved to have an artistic talent, which he developed over the years.

As a young adult he moved to the neighbouring village of Sadon, where he worked as a bricklayer and plasterer. In 1890 he moved to the community of Karman-Sindzikau, some 50 km north of Sadon, doing the same kind of jobs and developing himself as a self-taught artist

In this community Edziev also built his own two-storey house.. He married, got a son and would live in Karman-Sindzikau until his death in 1953.

In the course of the years he became a productive self-taught artist. This post will focus upon Edziev's creative activities that can be associated with the field of art environments. That concerns the sculptures that decorate the walls of his house in Karman-Sindzikau, the grave tombs in this community and those in the village of Khod where he was born.

Sculptures on the walls of the house

Edziev constructed his house around 1905, when he was 40 years old and he probably already had a lot of experience in making sculptures. The sculptures on the outer wall mainly show individual people and a single couple, in any case there are no large ensembles.

On above picture: left a (female) harmonica player, on the right a couple, 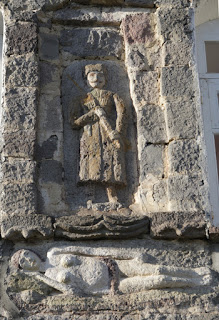 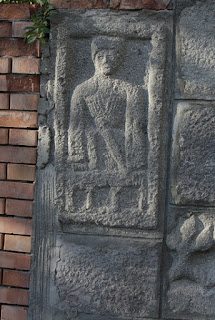 The pictures above show male persons in traditional outfit; the picture on the right also
shows a lying, maybe sleeping woman 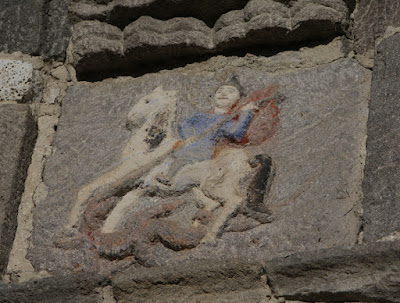 The picture above shows St George on a horse and (picture below) there are also
self-contained decorative elements. 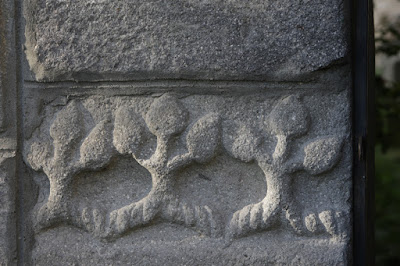 Currently Edziev's house is not inhabited and the sculptures probably have not been maintained for a long time, but some sculptures still have their paint and they seem to be in reasonable condition.

In circles of lovers of Edziev's artwork it is being considered to transform the house into a museum. However, in this respect financing is a major problem.

Traditionally, in North Ossetia a grave was provided with a tsyrt, kind of an obelisk. Edziev. who very often was asked to make a decoration for a grave, may be considered as a reformer of this tradition because he was one of the first to replace the tsyrt with a tombstone.

The internet has information about creations Edziev (in all probability) made for graveyards in his birthplace Khod and in his later residence Karman-Sindzikau,  but also about tombstones on cemeteries in the communities of Nogkau and Zadatesk. The graveyard in Khod has such a number of gravetombs created by Edziev, that this site ranks as an art environment. This probably also goes for the cemetery in Karman-Sindzikau. 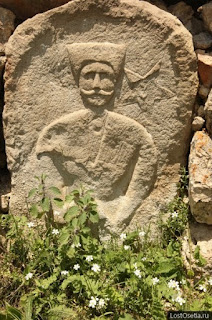 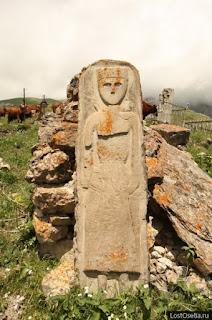 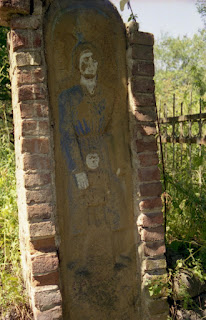 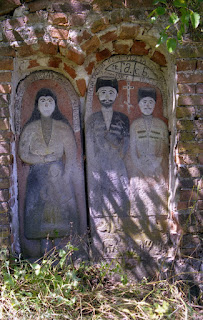 these four pictures by
Alina Akoeff,
the two all above (2012) as on website Lost Ossetia,
the two others (2011) as on Chuchundrrra Live journal


The series of pictures gives some impression of the way Edziev created the memorials on the graves. In almost all cases there is a representation of the deceased, that characterizes the person as he or she was in daily life. Tradition meant that men were mostly depicted in combat equipment, while women would be surrounded by daily things

Characterizing the personality of the deceased corresponds to a certain extent to the work of Ion Stan Patras from Romania, who created grave signs for the cemetery in Sapanta.

Unlike the situation in Romania, Edziev's tombs are in danger of being lost if no protective measures are taken.

But in this respect action is taken. In February 2018 a group of volunteers, among whom members of the Union of Artists of North Ossetia, cleared the cemetery of Karman-Sindzikau and removed shrubs that had grown over time around the tombs created by Edziev. 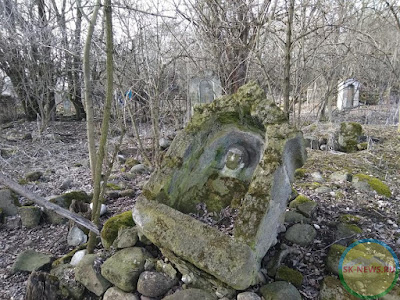 
In 1944 Edziev got formal national recognition when he received the title of honored artist of Ossetia.

Maharbek Tuganov (1881-1952), an important person in the North Ossetian art world, in an early phase saw the importance of Edziev and encouraged the collection of his sculptures and wood works, in this way laying the foundation for the later collection of Edziev's artwork in the National Museum of North Ossetia Maharbek Tuganov In the 1970s this Museum would make efforts to identify and document Edziev's scattered graveyard sculptures.

In 2015 the Museum had an exposition of Edziev's artwork on the occasion of his birth 150 years earlier At that time it was noted that Edziev could be seen as the forerunner of modern Ossetian sculpture. Edziev became known outside of North Ossetia, when in December 2016 the Moscow Museum of Contemporary Art had an exposition The Parallel of Two Legends about Edziev and Pirosmani (an artist from Georgia).

Documentation
* Articles by Alina Akoeff on Live Journal part 1 (March 9, 2011), part 2 (March 10, 2011) and a third one (October 24, 2011)
* Article on Live Journal (February 2014) with a report of a visit to Edziev's birthplace Khod
* Website made in 2016 with a presentation of the website of the fantasized Museum Soslanbek Edziev as it might exist in 2022 (there is a page with many photos of Edziev's grave tombs and another page with comments by Kromvel Biazarti, Alina Akoeff, Yuri Abisalov and Lyudmila Byazrova on -english subtitled- videos)
* Website Lost Ossetia with a page that documents a number of Edziev's grave tombs

Email ThisBlogThis!Share to TwitterShare to FacebookShare to Pinterest
Labels: display of sculptures made from stone, exterior walls decorated with sculptures, frescoe decorated exterior