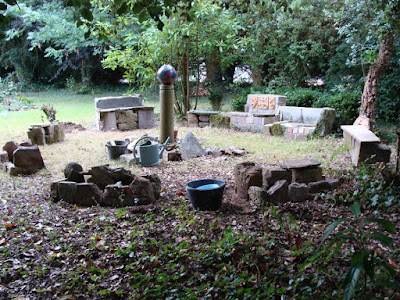 "map of the world" under construction
all pictures from Facebook

The picture above shows a creation named Map of the World  under construction. It is one of the cercles (circular thematic sites) included in Roselyne Descamps' decorated garden around the Villa Kernetra, which is located in the community of Lanvollon in Brittany, France.

This cercle consists of a female statue surrounded by a circle of stones and benches on which a frieze will run with the twelve signs of the zodiac. 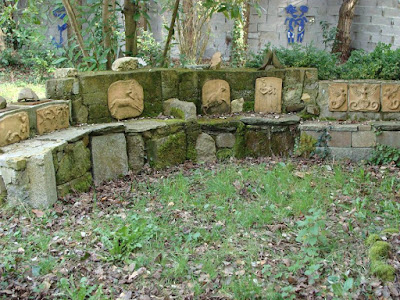 another view of the "map of the world"

Born in May 1946, Roselyne Descamps studied at the University of Rennes, Brittany, and was educated as a botanist. She was a horticultural trainer at an employment pole in Guingamp and was conservator of the Kerdalo Gardens in Trédarzec.

In 1978, when she was in her early thirties, she could buy Villa Kernetra in Lanvollon. By this time Roselyne had also become skilled in making ceramics. Her qualities as botanist and ceramist, combined with a lively interest in myths, legends and tales of the Breton past, would have a major influence on her further life and the special development of the garden around Villa Kernetra. 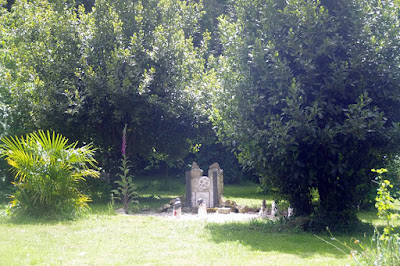 another specific site in the garden
is the "Templar garden"

This villa was built in 1890 on a spot where in the seventh century a monastery -founded by an Irish monk- was located. The garden of the property, over one hectare in size and separated from the street by a 40 meters long brick wall, was very suitable to realize Roselyne's idea to create a symbolic and thematic garden in the spirit of Niki de Saint Phalle's Tarot Garden, facteur Cheval's Palais Idéal or Robert Tatin's Musée. 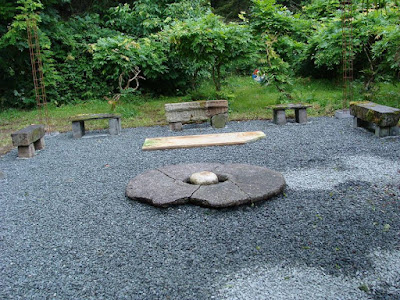 the cloister is a place of meditation and contemplation,
gathering stones that originally were scattered all over the garden

The garden was also transformed in botanically terms, for a part because of the damage caused by the great storm of 1987 that struck Brittany, but above all to give expression to contemplative and mythical concepts, reflected in special arrangements of trees and shrubs, such as the clairière des  druides (clearing of the druids) -a collection of large trees in an arc- created in 1990-1992, a collection of hellebore under a weeping beech or palms and laurels planted in memory of the Templars and the cathedrals they built. 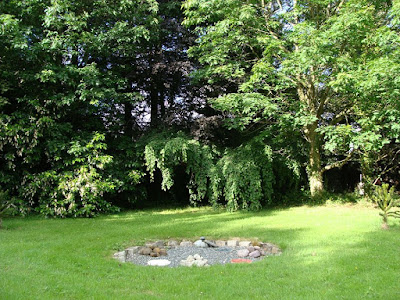 the circle of druids

Mosaics on a brick wall and other creations in the garden

Assisted by volunteers,  Roselyne Descamps from around 2011 until 2015 has been building a wall of about 70 meters long, made of white blocks of stone. This wall, which meanders through the garden and fits smoothly into it's landscape, is a decorative and -in sacral respect- a protective structure. In practical terms it offers the opportunity to fix the many mosaics that in the course of the years have been created to adorn the garden.

Here is a small selection of these mosaics and other creations that decorate the garden. The picture above shows part of a group of all together nine Preuses Cavalières. Historically seen these are ladies, in general from aristocratic origin, who shared a chivalrous ideal and organized tournaments or formed part of military orders. The scene is based upon an Italian wall painting in the Castello della Manta Museum near Saluzzo in the Piedmont region in Italy. 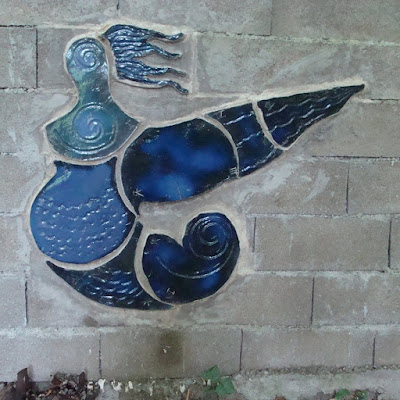 On the wall of white blocks the visitor will see a large number of mosaics and frescoes of cards from the Tarot.

Above a a combination of dark blue mosaic made from sandstone, glazed at 1260°, representing card number 20, the Jugement. 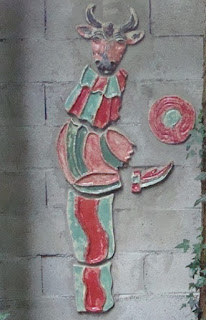 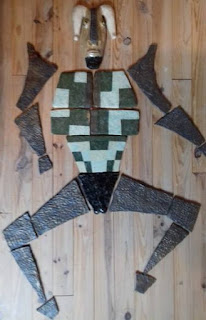 Left above the Zodiac sign Le Bélier (in English: Aries) created by Gérard Buissonnière, an artist from Paimpol. As it is the first astrological sign of the zodiac, Aries marks renewal and beginning.

Right above the Egyptian deity Apis, in the shape of a bull with horns. 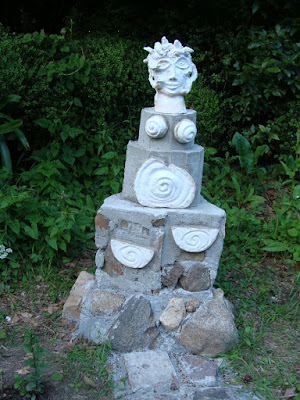 Above a sculpture of Medusa, a monstrous appearance in Greek mythology with hair of winding snakes. In the setting of the garden this creation also represents tarot card number 8, Justice. 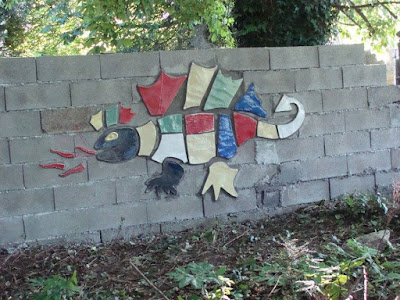 The above multicolored glass mosaic depicts a dragon, a creature that in the western world since the rise of Christendom represents evil and is synonymous with demons.

Below a mosaic with blue elements depicting a tree. 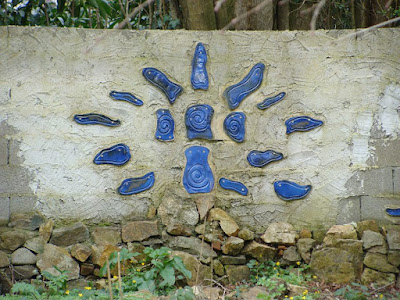 Since 2013 the garden is registered in the Guide des céramistes de France. It can be visited on open days or on appointment