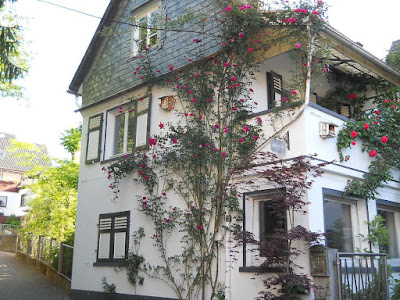 all pictures courtesy of Matthias Korb

Located in the small community of Lohrheim, Germany, some 70 km north-west of Frankfurt am Main, above pictured house is home to an art environment in the capacity of a museum, named INITIUM ET FINIS (Beginning and end). As a further indication the complement Wunderkammer der Humanität (Wunderkammer of Humanity) is often added.

The museum, a private affair, was developed from 2008 on, when Matthias Korb bought a house in Lohrheim when he needed more space to further develop his artistic activities 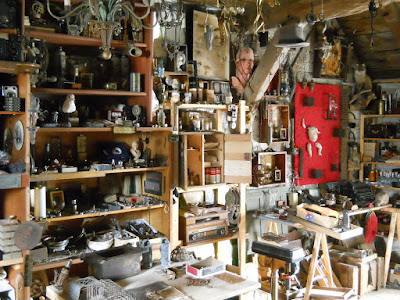 Matthias Korb was born in 1969 in Frankfurt am Main.

Already at a young age he was concerned with man and his place in the system of nature and how that was expressed, for example, in the way gardens were laid out in the Renaissance compared to the contemporary way of working.

By this interest he was inspired to look for a job in the field of landscape gardening. In his late twenties, in 1997, he started his own business in this area.

With the same interest in mind, for a number of years Korb was also involved in publishing books, while in 2005, without any education at an art school,  he started to focus on the creation of visual art. 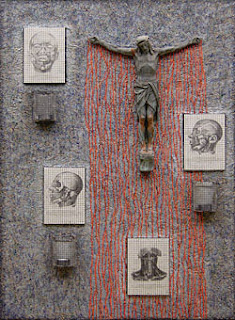 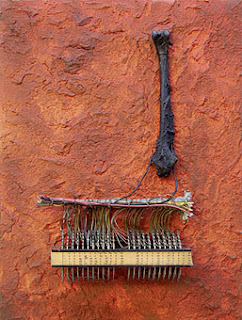 One of Korb's various forms of artistic expression is making assemblies, as shown in above
pictures, where found objects get a new meaning and nature appears in the background decoration that can consist of a mixture of paint and different forms of earth.

There also is a relation with his job as landscaper in so far the way he arranges his assemblages corresponds to the way he designs a garden with lines, colors and forms.

A self-taught artist, Korb already has participated in various expositions in Germany. 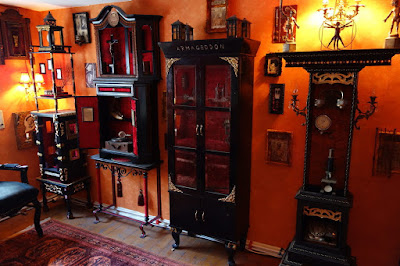 In 2008 Korb added another approach to his artistic activities, when he started to transform the house in Lohrheim into an art environment.

Conceptually this art environment is an overwhelming collection of objects, attached to walls, displayed in 19th-century wall cabinets, sometimes arranged in a horizontal arrangement, but often seemingly randomly placed, all the things that surrounded mankind or were made or used to go through life. 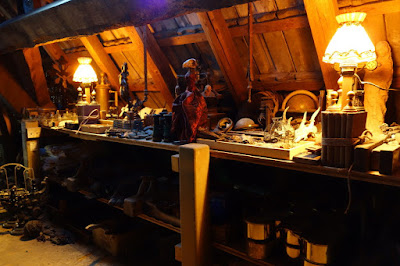 In a review of the museum art historian Sophia Rasmussen used a classification from the time of the classics to describe the collection.

But then the museum just as much presents items that do not fit in this classification
Indeed, such is life.... 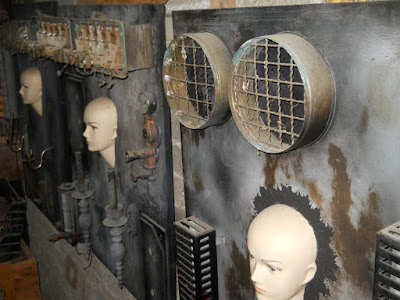 All items have been gathered by Korb himself. He found many items just by by chance, in nature, during his work, on the dump, but mostly at flea markets in Frankfurt, a town where he often comes because of his work. But he would also search consciously for specific items if they would fit in with the concept of an assemblage he had in mind to make.

Spatially, the site includes rooms in the living house, the barn with a floor, and the garden

Some of the rooms in the house have been transformed into salons with dark red painted walls. Such a salon may be equipped with black painted furniture and wall cupboards which give the room a 19th century look. Smaller items, such as framed photos on the wall, reinforce this allure.

The barn covers the largest part of the collection. It also includes Korb's studio and the artworks he has created in the course of the years.

The garden is intended as a place to rest after a visit to the museum and to consider one's experiences. There is an assembly of glass bottles that portrays the periodic table of elements, just the tangible parts of course. Maybe a reference to the inevitable fact that a collection like this never can be complete. 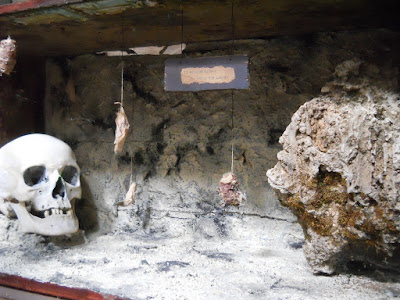 As said, the museum is also indicated as a Wunderkammer der Humanität. The German concept Wunderkammer (Room of wonders) refers to a phenomenon from earlier centuries, when collections were set up -initially by royal people, later also by rich civilians- which included artworks, but also miraculous and everyday things.

From these wunderkammer the art museums of our time would develop, some with a wide collection, as goes for many national museums, others with a specific collection that focuses upon a specific artist, art direction or historical period. 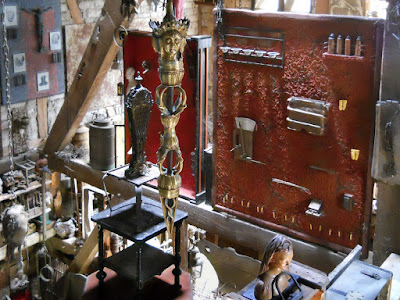 Other than joining this process of ongoing specialization, the Museum Initium et Finis bears witness to a development that is going in a completely opposite direction, that of generalization.

This does not alter the fact that visiting the museum can cause nostalgic feelings about earlier
times. In good weather the garden of the museum offers the visitor a suitable place to reflect about this.

Videos
* A film by Ullrich Knapp entitled Initium et Finis. Das Gesamtkunstwerk von Matthias Korb (7'46") in 2021 was added to the website
* Video (2013) with an impression of the workshop and the site (2'36", YouTube)

note
¹  A Gesamtkunstwerk is a concept that originated in German art history during Romanticism, suggesting an interplay of arts, initially especially in architecture.