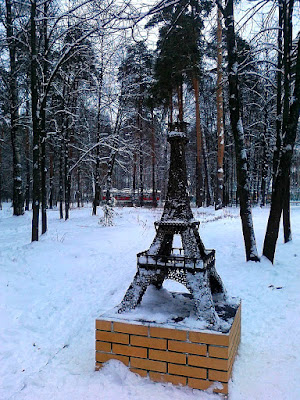 Above replica of the Eiffel Tower made from welded iron bolts and nuts, is part of an ensemble of scrap metal sculptures that in 2013 was installed in a park in Ivanovo, a city in Russia, some 250 km north-east of Moscow.

This ensemble has been created by Vladimir Volkov, who was born in 1965 and by profession is a technician working at Ivanov's Radio and TV Company. 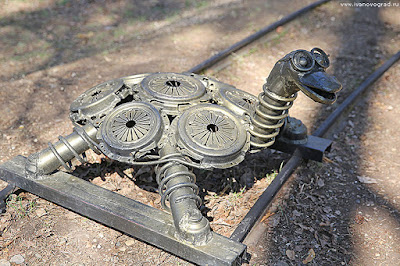 part of the collection: a turtle
this picture and the next ones from the municipal website ivanov.ru

In his free time Volkov likes to make all kinds of iron sculptures, that he assembles by welding pieces of scrap metal together, a hobby that started when he was in military service and saw a sculpture made from scrap metal on a street in Kiev. 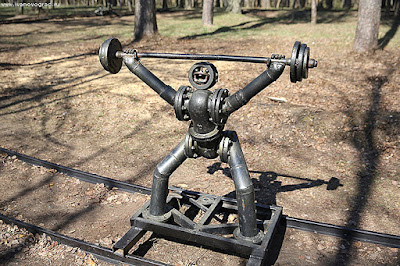 another part of the collection: a weightlifter

At home he has a  collection of mostly small-scale iron sculptures, depicting female characters, animals like a bird or a dog, and various other creations from iron including utensils such as a standard for a lamp.

Before the ensemble was installed in the park Volkov already had made several large-scale sculptures that got a place in Ivanovo's public space, like an older man seated on a bench with a dog at his feet (on Arseny street), a skateboarder (in front of the building of the Radio/TV company), and a tribute to Nikolai Benardos, who discovered arc welding (on Lenin Avenue, near a former factory).

There is also a sculpture (at Teatralnaya Street, near a medical polyclinic for children) that represents a wolf holding up an adopted calf, a scene that refers to a Soviet-period animation film that's well-known in Russia. 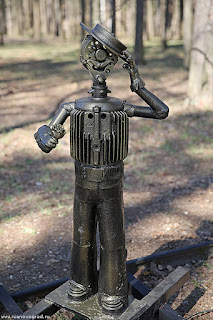 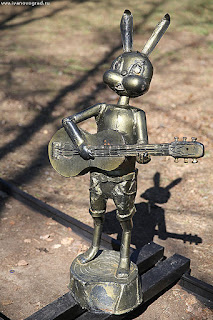 left a guitar player, right a man offering a bouquet of flowers

At the opening of the ensemble in the Stepanova park on 29 June 2013, it had a size of five sculptures, which were mounted on the still existing rails of a former train for children.

The number has gradually increased and currently there are some thirteen sculptures. 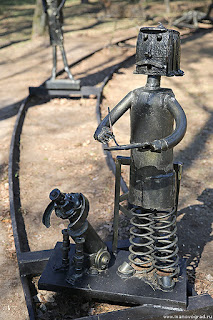 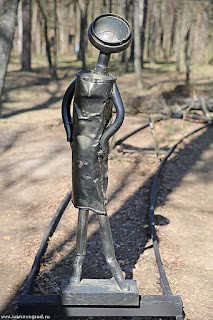 The components of these sculptures can be recognized, easily with regard to the painter and his dog (right above) where the legs are spiral springs, a bit more  more difficult with regard to the lady (left above) with a dress made from an elongated narrow barrel, kind of an exhaust, and a head made of a headlight of a car. 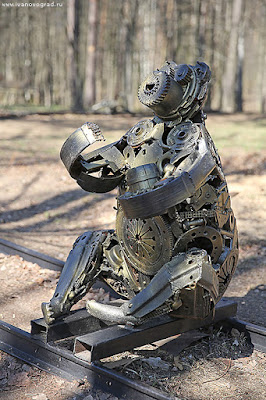 a teddy bear with a barrel of honey

As can be seen on the video below (starting at 2'05"), early 2018  in a public meeting Volkov got Public Recognition for his for his contribution to the cultural development of the city.


* A video (2017, You Tube) about the Stepanova Park has a sequence about Volkov's ensemble of sculptures that starts at 6'00" (playing the video here is blocked)