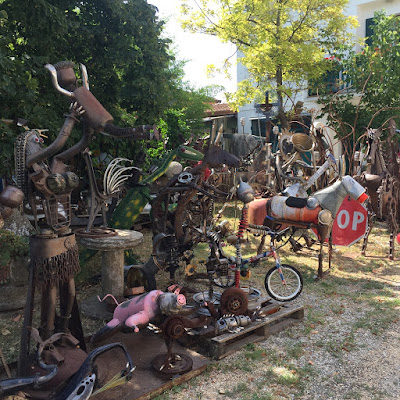 Above picture shows a garden with a large number of iron sculptures located in Massa Lombarda, a community of some 10.000 inhabitants in the Emilia-Romagna region in Italy, about 40 kilometers east of Bologna

This art environment, located on the side of his house, has been created by Renato Mancini who was born in Massa Lombarda in 1954.

When at age twenty he was in military service, he saw a sculpture of scrap iron depicting a rider on a horse that deeply impressed him. So once he had completed his military service, in 1976, he started to make this kind of sculptures himself, using a variety of recycled metal and scrap iron items.

He worked as a carpenter and maintenance worker at local companies, which gave him the opportunity to collect iron waste remaining in the production processes performed by the companies he worked for. 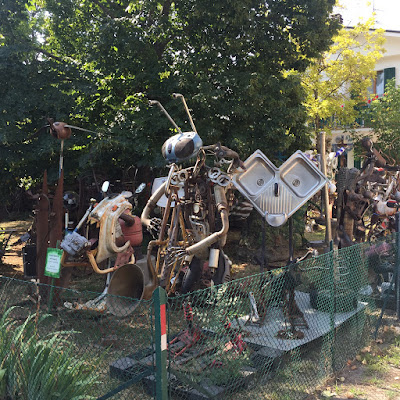 Mancini's artwork in general has a realistic slant. On his personal website he says: "The objects themselves, through their form, suggest to me what they want to become. That's how the constant collecting of recycled materials, particularly scrap iron and similar waste, has become a major part of my research and artistic work. The fact that 100% of the materials that I use are recycled is fundamental for me".

The garden at the side of his house with an area of some 1000 m², houses hundreds of items, small ones, but also a number of larger creations, which in general have a realistic appearance, but sometimes with a somewhat caricaturist approach, such as the saxophone player with a face like an insect or the character with a face consisting of a piece of kitchen sink with two sinks

The large quantity and the diversity of the works created by Mancini so far, bears witness to the great imagination, inventiveness and passion he possesses as an artist. 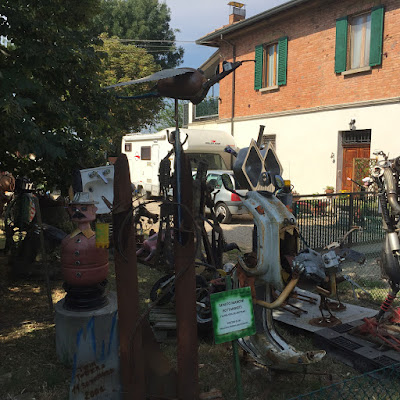 view from the street