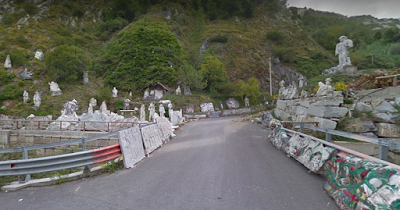 Leaving the small community of Bedizzano, Italy, into the direction of Colonnato, the road winds itself up in hairpin bends into the Apuan Alps, a mountain range in northern Tuscany. At the third bend there is a side road that is flanked by numerous sculptures, as shown in above and below screenprints (September 2016, Streetview). This spot is locally known as Mortarola. 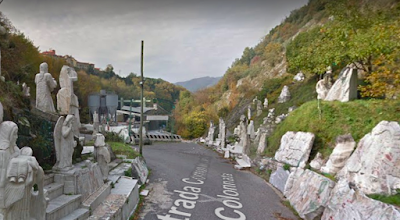 a little further on the same strada
click photo to enlarge

The series of  sculptures, scattered along the road, was created by Mario del Sarto, who.was born in 1925 in a rural family. Already at the age of eight after school he helped his father, who was a shepherd  in the area of the Apuan Alps.

De Sarto himself for many years worked as a carpenter, until he could get a job at the Ferrovia marmifera di Carrara, the railroad built between 1876 and 1890, that was used to transport marble blocks from the mountains of the Apuan Alps to the the Mediterranean sea nearby the community of Carrara, a 22-kilometer track that ran over many bridges. It was disbanded in 1964. 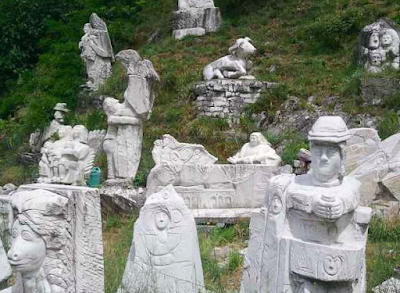 this picture and the next five
courtesy of Isabella.m (Flickr)

In the 1970's, when de Sarto was in his mid forties, without any artistic training he became active as a sculptor, first in the field of woodworking, later in making sculptures, mainly using the the blocks of white marble that he previously transported by train and which made Carrara so famous.

He had his workshop and living house along  the aforementioned Strada Comunale Carriona di Colonnato and gradually the sides of that street became filled with the many creations he made. 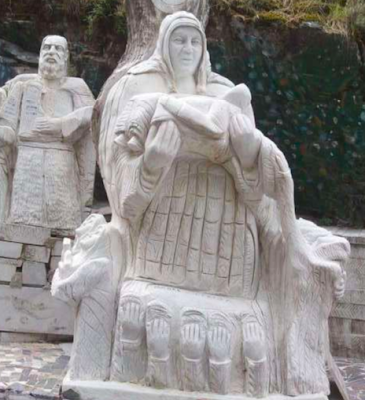 About his way of working he said that he lets the marble speak for itself. When he starts working, he has no models in mind, not even in his imagination, so, as he said: "The figures must appear themselves, as if by magic". 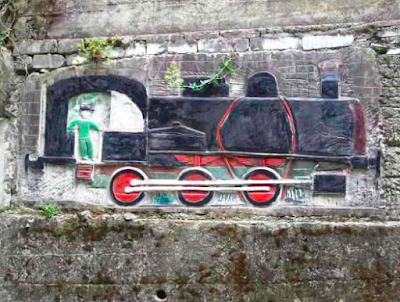 For his sculptures he uses either marble that naturally comes out of the mountain or remnants that remain after the processing of marble blocks..His sculptures often have a historical or biblical background.

A great work with a historical impact is the one called La fontana del sapere (The fountain of knowledge), a combination of well known characters and memorials from the area, such as the locomotives and the route of the marble railway, as well as the work of the miners. 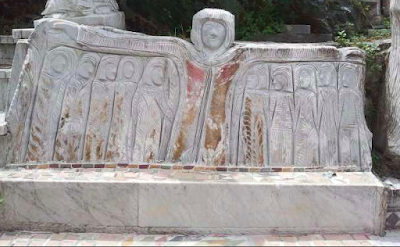 Started in the 1970's, del Sarto, who currenty is in his nineties but on the video below still has a lively appearance, meanwhile has enriched the place where he lives with hundreds of sculptures, stand alone or united in ensembles. It is one large open air museum.

The area around this site has been hit several times by floods, which in particular have caused damage to the sculptures stored at the rear of del Sarto's workshop. But these natural disasters have not erased the great impression made by the creations that are still on display. 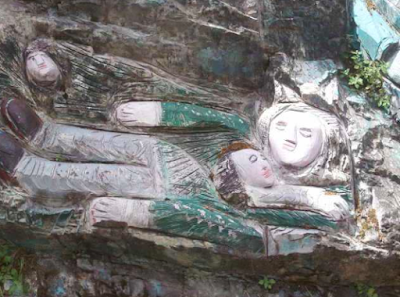 Sculptures by Del Sarto are also found elsewhere in Italy, like there is a work located near the cemetery of San Giuliano in Puglia that evokes the memory of the earthquake in that place in 2002, that killed 27 children in a kindergarten.

Mario del Sarto
La strada con sculture
locality known as Mortarola
on the road from Bedizzano to Colonnato
near Carrara, Tuscany, Italy
can be seen from the road
streetview 1
streetview 2
Posted by henk van es at 10:33 AM

Email ThisBlogThis!Share to TwitterShare to FacebookShare to Pinterest
Labels: display of sculptures made from stone, park with a variety of sculptures, scattered art environment