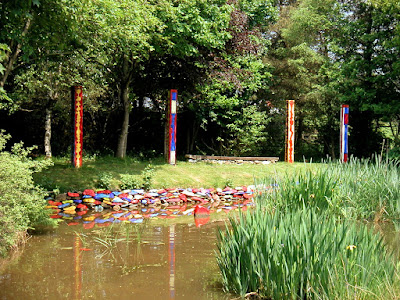 all pictures courtesy of Christian Vancau
from his collection and website

Moircy, a small village, part of the community of Libramont-Chevigny in the Belgian Ardennes, is home to the art environment referred to as Totems garden, a site that was single-handedly created by Christian Vancau, by transforming the swampy and grassy area around an old ruined house into a a leafy garden decorated with colorfully painted totems. 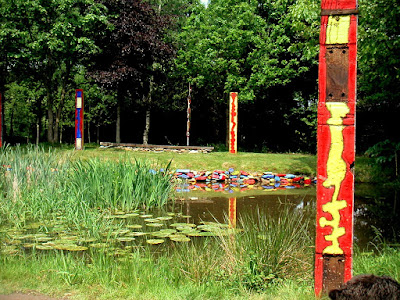 Christian Vancau was born November 1, 1937 in Ghent, a city in the Flemish part of Belgium. At age 3 he moved with his mother to Liège, a city in the Walloon part of the country. His father was in the Belgian army as a surgeon and had left for London when in May 1940 Germany occupied Belgium. Young Christian could only get to know his father when the war had ended (formally in May 1945, when Germany capitulated). Vancau will become his painter's name, a shortcut to his birth name Van Cauwenberghe.

Vancau studied law and earned a respectable position at a bank. He was in charge of building a network of independent agents, in the province of Liège, to find them, to appoint them, to initiate them at the banking level and to make them work in matters of savings and mortgages. 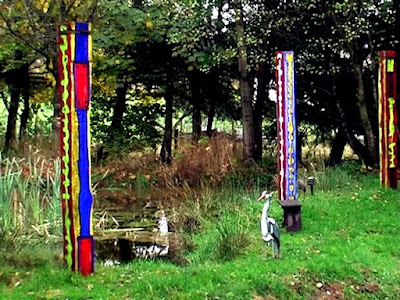 But he did not feel comfortable in this world of money. In 1985, he was appointed as auditor and in 1989, a few years after the acquisition of his bank by another financial company, he and many others lost their jobs due to spending cuts. Vancau filed a lawsuit that he won after four years of court proceedings.

As a visual artist, Vancau participated for many decades in the artworld. It began in 1967. In 1971 he was sent by his bank in Province of Luxembourg to create there a new network of agents.

From 1976, he presented his paintings at many exhibitions.

But, just as in the world of big money, he dit not really feel at home in the artworld with its galleries. expositions and the need to sell and become famous. In 1990 he went to France, to La Seyne-sur-mer, during seven consecutive stays, and this, for five years. Then, in 1995, Vancau decided to no longer be part of this world and to stop painting. 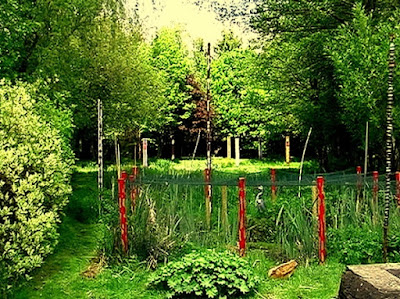 Reviewing his activities as a visual artist in 2005, Vancau said: "If I'm self-taught? Yes ! I have never taken art classes. A naive painter?, No! A representative of the art brut? No ! Simply a primitive, looking for a round-trip nature-culture "

This remark probably is characteristic for the way Vancau had to express his creative feelings, a way that could lead to nothing else than transforming his garden into an artwork, une gigantesque peinture vivante (a gigantic living painting) as he said. 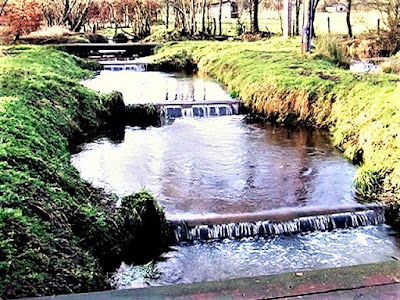 a view of the stream

When in 1978 Vancau, who in that time managed the regional office of the bank in Libramont, was faced with the decision to buy the neglected property in Moircy, the decisive factor was the presence of a stream that flowed through the grounds. Here he could satisfy his desire to live and work creatively in the midst of nature, although a lot had to be done to renovate the house and adapt its environment, which at the time was only a marshy pasture, without a single tree. 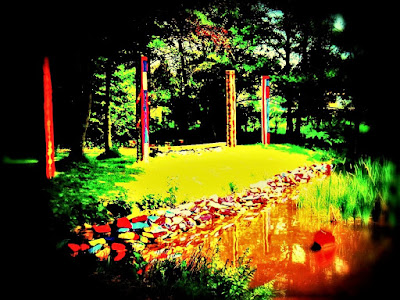 In 1982 Vancau started to approach the outside area of some 30 ares belonging to the property. He planted some 150 trees and shrubs which he collected in a nearby forest.  He digged out a number of ponds, fed by the stream that crossed the terrain, which greatly contributed to the leafy atmosphere that ultimately would characterizes the garden.

And he transformed the garden into an art environment by adding dozens of multicolored totems.

Created as an artistic statement and to liven up the garden, these totems give an extra charm to the site when they are reflected in the ponds. 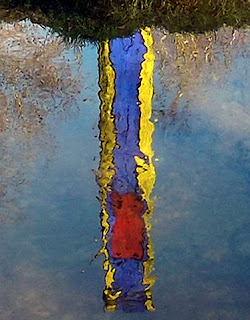 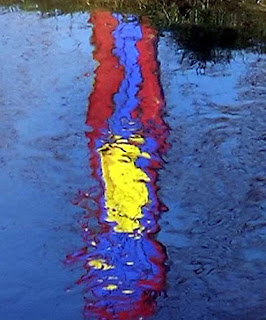 Other decorative elements of the garden include decorative sets hanging in the trees and colorful stone arrangements resting on the ground or paving the walls of the ponds.

In the field of art environments, totem-shaped structures are not often used as a decorative element in works of art. Closest to Vancau's work is the use of totems in the art environment created by Theo Wiesen (1906-1999). Vancau's approach differs from that of Wiesen in his specific and rather uniform structuring of sculptures and in particular in his use of colors, two elements which also contribute to the singularity of his work.

Artwork in the Bay of Toulon

In 1991 and 1992, at the request of the community of La Seyne-sur-Mer, Vancau installed an series of totems in the bay near the Fort de l'Eguillette, which is part of the maritime defense system, built by Napoleon, around the port of Toulon on the southern French Mediterranean coast. 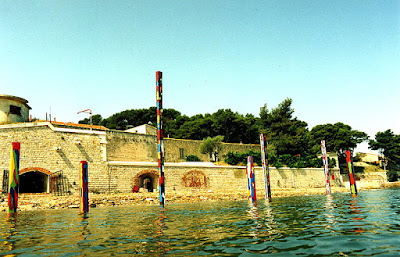 This creation, which added a colorful accent to an otherwise military landscape with fortresses and gray warships, could no longer stand the test of time and has since disappeared, gnawed by the light tides. Vancau revisited the site in 2006. It had passed from the hands of the municipality to those of the Navy. There were only stumps left..... 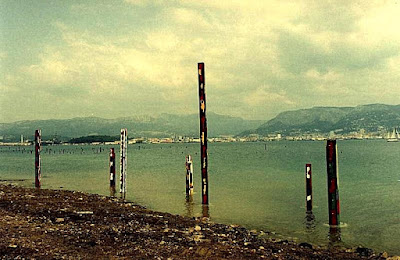 In 2004 an art gallery was installed above the garage on the side of the house. Daylight can enter through upper windows and there is professional lighting. 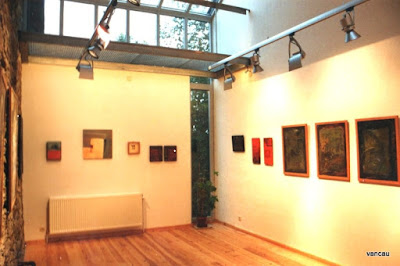 On the walls there are paintings made by Vancau's friends. The gallery also has two libraries with all together 24 meters of bookshelves, completely filled with books.

In June 2005, Vancau, together with eight friends, founded the Fondation Vancau. This organization aims to protect the site and everything it includes, such as trees, sculptures and decorations. It also wants to protect the works of many friends-artists. And it wants to promote the dialogue between those who practice and appreciate this form of art.

Since 1995, Vancau has repeatedly organized an "open day" for those interested in visiting the garden, its house and its workshop. The last open day, visited by more than 3000 visitors, was in 2006, To my knowledge, there will be no more open days.

But the Foundation was reinstated May 11, 2019, with new directors and activities in Moircy.