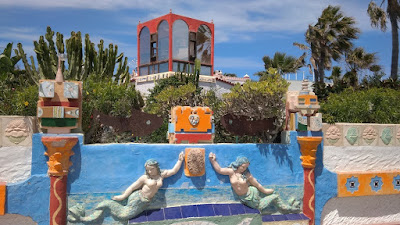 The small community of Corralejo in the far north of the Spanish island of Fuerteventura is home to a house that is exuberantly provided with all kinds of creations. It's the Villa Tabaiba, home of Carlo Calderón Yruegas and his wife. 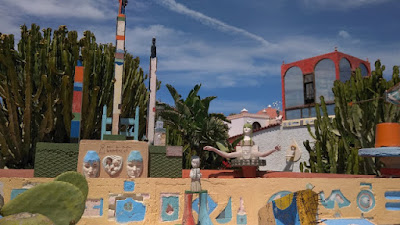 Born in 1940 in Sevilla, Spain, Yruegas already at a young age showed signs of an artistic talent.

After high school he focused on courses in the field of linguistics and architecture, studying at the Colegio Padres Escolapios and at the Escuela Técnica Superior de Arquitectura of the University of Sevilla.

In France he visited the Université Rouen Normandie located in Mont Saint Aignan, where he qualified in French language and literature. 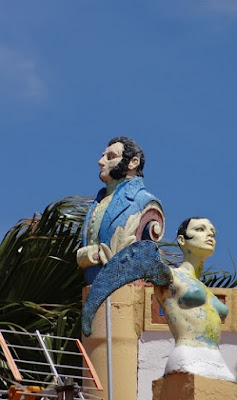 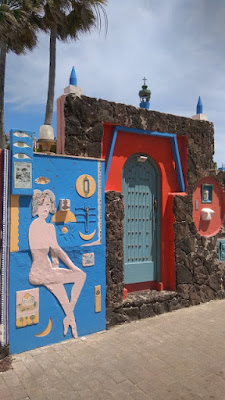 After these studies he obtained a scholarship to study the abasi architecture in Iraq, a specific variety of architecture that originated in Baghdad and via Damascus arrived in Spain. Yruegas stayed for some 18 months in Baghdad, where he also was involved in projects to realize single-family houses, created some sculptures that were included in a local modern art museum and supplied articles to Spanish (art) magazines. 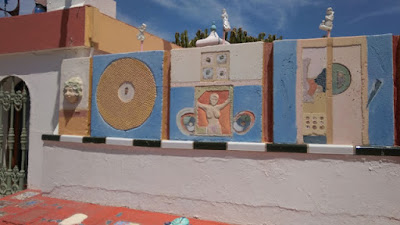 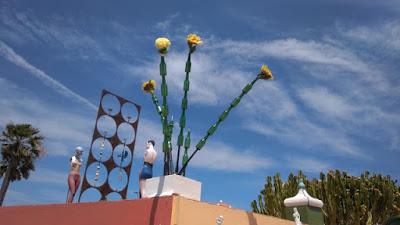 In the late 1970's Yruegas and his wife got the idea to find out if they could continue their lives at Fuerteventura. They went there, but in Puerto del Rosario, the capital of the island, there were no houses to rent, so after some days in a hotel, they left for Corralejo, where they could rent a house.

They probably soon felt at home, while Yruegas also had noted that from this location he could do his work as an architect.

So after some time the couple bought the house, where they currently still live, located at the end of the Avenida Corralejo Grandes Playas in Corralejo, near the community's large beach.

Yruegas turned out to be a man of many talents, besides being an architect he is a painter, sculptor, photographer, poet and writer. In that last capacity he published, among others Escrite en Fuerteventura, 1978-1998, published in 1995. 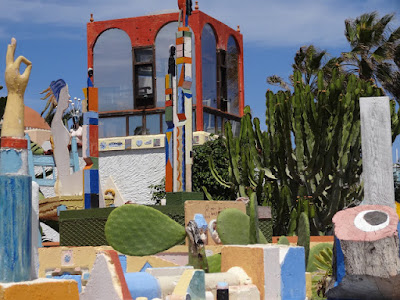 It began as a whim, Yruegas said in an interview in December 2017.

Asked why he made these specific creations, he said:  “For my personal pleasure, it's like a joke. I am an architect and I'm very rational and minimalist while designing houses, but with this Villa I can have fun, entertain me and enjoy my own art.” 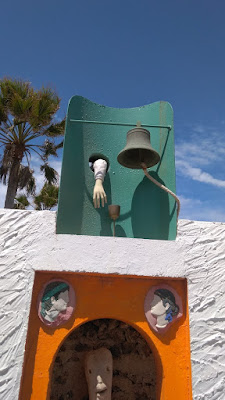 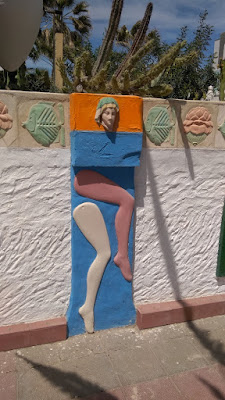 And indeed, already for the passers-by there is a lot to enjoy from the street.

One sees a long white wall that separates house and garden from the street and on that wall there are colorful scenes with sculptures partially sunk into the wall, such as those with two mermaids against a blue background (as in the top picture).

One can also see from the street that in the area behind the wall, the walled garden, there are structures that rise high above the wall 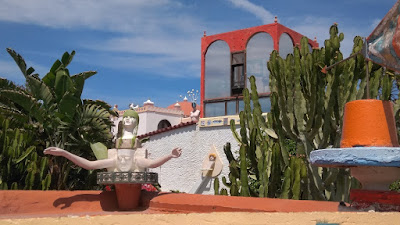 This art environment includes a number of sculptures that characterize people in all kinds of capacities. Some have been created on the basis of mannequins which Yruegas acquired and subsequently processed (That's why he sometimes is called the "artist of the mannequins.")

Yruegas apparently enjoyed creating all sorts of surreal scenes, such as an arm emerging from a hole in a green surface with a bell, or a lady consisting of a head and two legs appearing on a predominantly blue wall, and various other comparable scenes. . 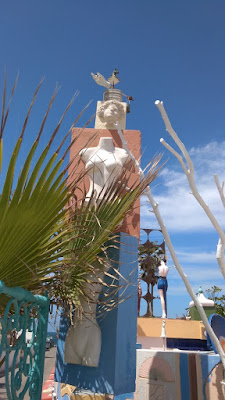 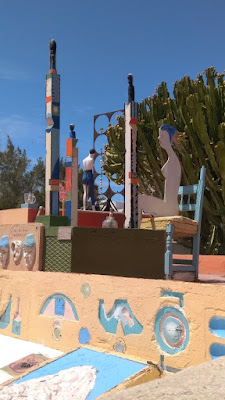 The walled garden of the site includes, in addition to a beautiful green plantation and many colorful decorations and sculptures, a number of raised structures, such as a square tower-like red structure, an elongated panel with transparant circles flanked in front and behind by mannequins watching and a large weather vane with a triangular wind catcher. 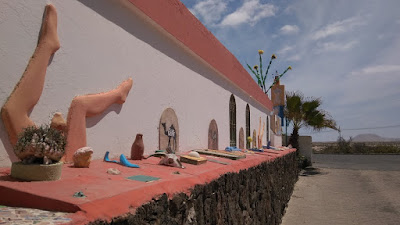 Currently (May 2019) in his late seventies,Yruegas is still active in maintaining the site, although it is quite a lot of work.