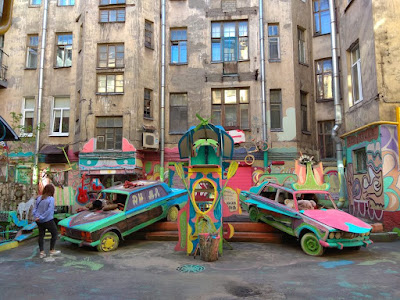 In Saint Petersburg, Russia's second largest city, with nearly 5.5 million inhabitants, Nelson Nikolaevich Iskandaryan for several years has been developing an art environment, generally known as Nelson's courtyard. This site has existed until summer 2020, when the courtyard was vacated, as far as I understand on order of the municipal authorities.
Here is the story if this site.

Not much has been reported about Nelson's life before he settled in the  small basement at the courtyard at Polozova Street nr 6 in Saint Petersburg.

He was born October 28, 1959 and he did his military service in the 1980's in Vinnytsia (Ukraine). But what happened after he left the military, is not clear, except that he -being homeless- wandered around for many years. 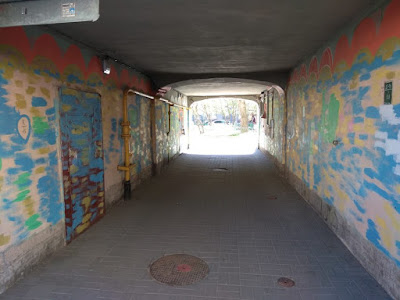 the (currently decorated) entrance of the courtyard

Around 2011 Nelson finally managed to find shelter in the basement in the courtyard of a residential block in Saint Petersburg, a yard that at that time still was a mess, where children by their parents were not allowed to play

Nelson's accommodation at the courtyard

The space in the basement, probably the abandoned room of a former janitor, offers Nelson just a small living area, but he does have a water tap, electricity and a connection to the internet. 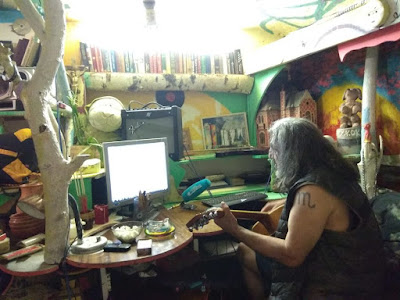 Photos of the interior of the accommodation show a colorfully painted, rather cozy interior that is decorated with all kinds of motifs and embellished with parts of birch trees. Nelson is often pictured  playing a guitar, singing one of his many self-written songs. The pictures also show a tame raven and cats, Nelson's roommates.

Nelson's accommodation. also called The Temple of Songs, with its colorful decorations, can be seen  as a small-scale art environment, a prelude to his magnum opus, the transformation of the court yard into an art environment full-scale. 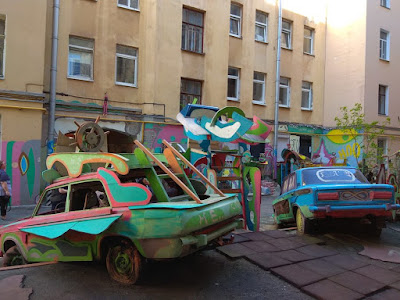 The earliest photos of the site on VKontakte date from May 2016 and show Nelson's art environment in an early phase of development, in which two shamed cars in particular are central.

Indeed, it all started when someone offered Nelson a large quantity of pink paint and he decided to use this to paint an old car that was in the courtyard. Thereafter, Nelson managed to get someone willing to give him a second old car, which he also painted.

The two cars, arranged diagonally, in some way mirroring each other, formed the central part of the creation, an arrangement that as far as I know does not occur in this way in any other art environment in Europe.

With its painted walls, pavements and doors, the centrally placed cars and other colorful decorated items that Nelson added, the site soon began to attract the attention of the residents of the neighborhood. Most neighbours apparently appreciated the project and began delivering old toys, bikes, a huge teddy bear and other things to Nelson, gifts that gradually turned the art environment into a varied set of colorful items. Incidentally, if Nelson received a toy that was still in good shape, he gave it away to children from the neighborhood. Back and forth, he and children in general weree on good terms.

The site included a cupboard that contained books made available by local residents. Those books could be taken by interested people, who in turn could also add books. Such a provision in the field of book exchange -which is also found in other large cities in Europe- has an important social function for the immediate vicinity of the site. 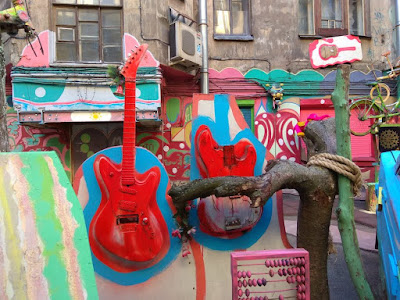 But in the meantime the site also became more widely known and the art environment became part of the city's sights.

For example, photo shoots were held for wedding photography, there were performances by groups of young children, as can be seen in the video below. and on the Russian website Pintaram one can see how the site can served as a background for people who like to make selfies.

Informal guides led groups of tourists to the courtyard, and publications on the internet about tourist travel included Nelson's art environment in their description of what to see in Saint Petersburg. 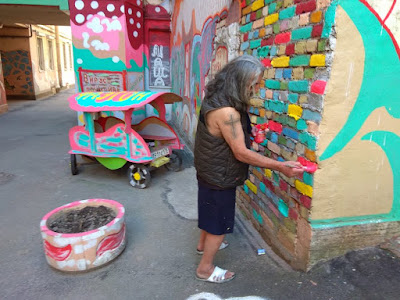 Many visitors, including children, enjoyed having a chat with Nelson. With this and the time he needed to maintain the site and to regroup the collection when new items were delivered, he was fairly busy every day

And then, he also had to find time for practicing his true hobby, playing the guitar and singing his self-made songs.

Whatever this may be, Nelson remained in a good mood and was considering to paint a nearby, unprocessed wall, perhaps together with a group of children, thus extending his art environment. 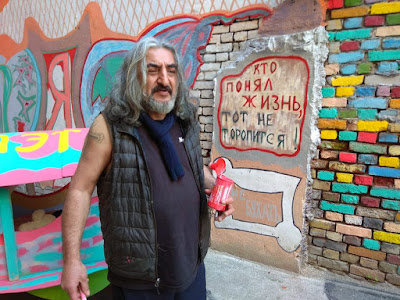