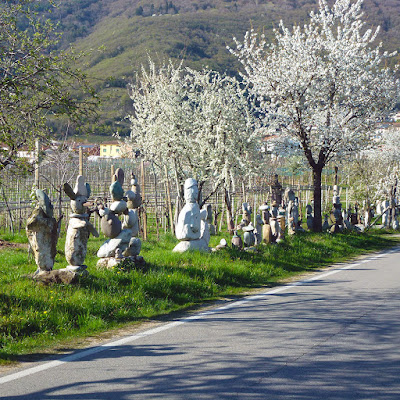 San Pietro di Barbozza is a small community of some 1000 inhabitants in the province of Treviso  in northern Italy, located some 80 km north of Venice. The area around the village is known for the wine that is produced there, in particular the Prosecco.

But the area also deserves the attention of those interested in art environments, because of Angelo Favero's creation. that is located along a road just outside San Pietro di Barbozza ¹ 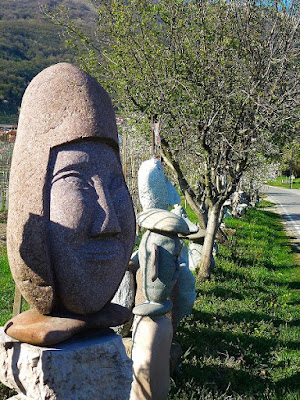 Angelo Favero was born on April 20, 1945 and he probably had a technical education, because he worked in the construction sector for international companies, involved for many years in projects in countries like Indonesia and Libya.

After his work abroad, Favero settled in San Pietro di Barbozza, living in a house in the village and also owning a piece of land just outside the community. Until his retirement he worked for a local building company. 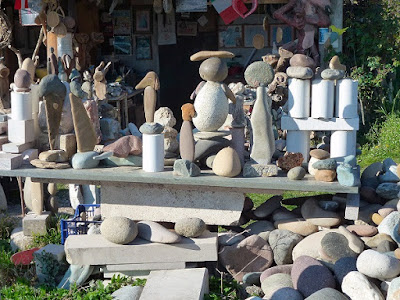 Favero has transformed his piece of land outside the village, in particular the part along a local road, into an art environment. The site mainly includes stone sculptures, predominantly arranged side by side in a long line parallel to and facing the road, although some are also grouped as separate ensembles.

Over the years, the collection has acquired a size of dozens of larger and smaller sculptures. 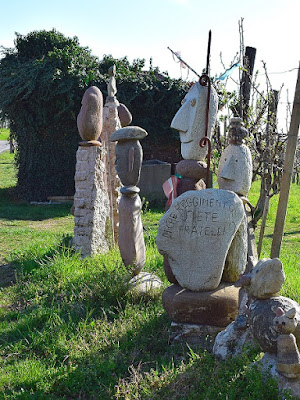 Favero collects the stones he uses for his creations, along the Piave, the river that flows through the region over a length of 220 km, rising in the Karmic Alps and ending in the Adriatic Sea. north-west of Venice.

The river passes Favero's hometown at a distance of a few kilometers. Its shores are full of rocks, large specimens included, mostly appearing in a typical oval shape due to the effects of the river. 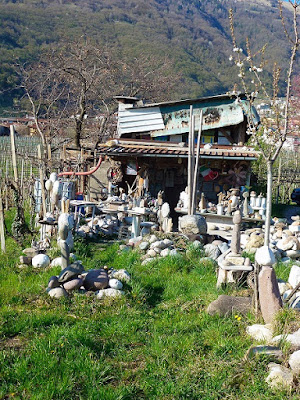 On the piece of land where Favero created his art environment, he also has his workshop, a shed made out of sheet metal and concrete, called l'Alcazar. Here he assembles the stones into sculptures he refers to as putinòts, probably a Venetian word that means puppet.

He puts his sculptures together by stacking -and connecting with construction iron- larger and smaller stones into the character he wants to portray and often already has recognized in the rough stones.

A head of a sculpture is sometimes provided with a headgear consisting of a flat stone, or a spherical stone on a flat one, and sometimes his characters are provided with small, colorful items that accentuate their character.

Of course, Favero also uses hammer and chisel to carve the stone into the specific shape he has in mind. 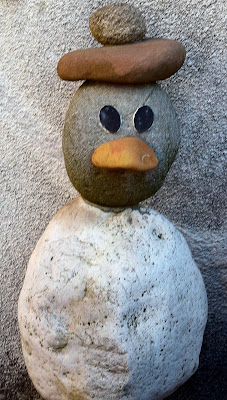 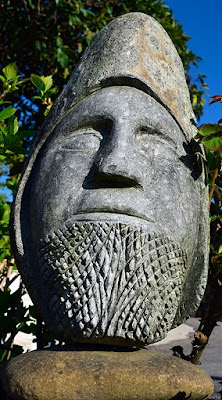 Favero, who is also known as Zoe, after a comic book from the United States, first published in Italy in 1945 as Arturo and Zoe, also has made mosaic for some time, but ultimately preferred sculpting.


He regards his sculptures as his family of his friends and also calls them citizens of the world.

Tourists often want to buy some sculpture, but Favero will not sell his creations, except in some specific situation when it has to do with a good cause.

Display of the sculptures in the village 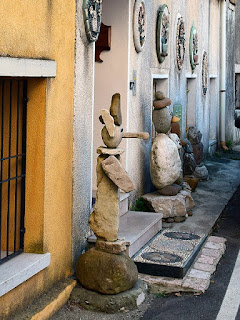 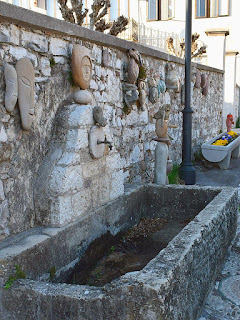 Documentation
* I sassi di Zoe, article and photo's on the website of Francesco Galli, photographer
* The website Prosecco Superiore Circular Route has a description of a 15 km walk in the wine region that goes past Favero's site which is briefly described
* The website Guarda il monde da un obló has a short review of the site and some photo's

Favero, Angelo
I Sassi del Piave
Via della Cima 20
San Pietro di Barbozza, Treviso area, Veneto region, Italy
can be seen from the road
the pictures below (2017) give an impression of the site
as it can be seen via streetview 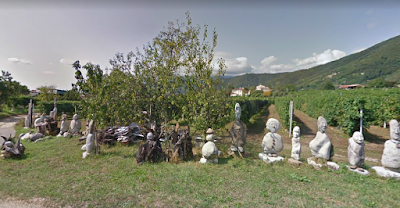 Email ThisBlogThis!Share to TwitterShare to FacebookShare to Pinterest
Labels: display of sculptures made from stone