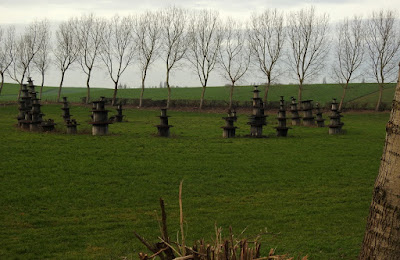 this picture and the next two courtesy of Ernst Gülcher

The above depicted circle of pagodas made from stacked wooden reels in different sizes, used to transport electricity cables, are reminiscent of the neolithic stone circles such as the one in Stonehenge. This singular architecture, designed by Julos Beaucarne, was established in the late 1990's in a field near the Belgian community of Beauvechain.

Born in 1936 in Ecaussinnes, a community some 50 km south of Brussels, Beaucarne in the early 1960's settled in Brussels. He would become famous as a singer, but he was also known as an actor, poet, author and sculptor.

As a singer, his first 45-rpm gramophone record was released in 1964, followed by annual or bi-annual new records. His repertoire, performed in French, was not only appreciated in Belgium, but also in France and in the Canadian province Quebec. He recorded 49 albums (over 450 songs), wrote 28 books and appeared in four movies.

Although Beaucarne could be contradictory, he was best known for his humanism and optimism, qualities that became only more pronounced after in 1975 his life partner was murdered with knife stabs by an unbalanced young man.

In the late 1990's he attracted a lot of interest by organizing a large concert on a site on which he also installed a circle of pagodas and in the early years of the new century he began making sculptures from second-hand and surplus material, as in the field of art singulier, a creative activity about which not much has been reported on the internet and about which no images are available either.

In 2015, at the age of 79, Beaucarne withdrew from publicity. and currently he lives in Tourinnes-la-Grosse (Deurne), some 50 km east of Brussels. 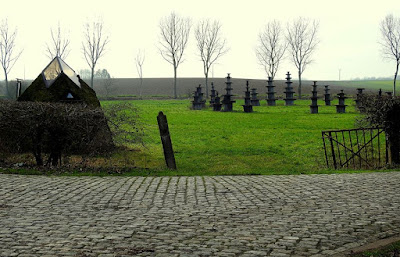 Years before the Circle of Pagodas was installed, Beaucarne was already busy with reels. In 1992 he installed three groups of nine reels in different places in Wallonia, such as the inclined plane near Ronquières in the canal from Brussels to Charleroi, the garden of the Abbey palace in St Hubert and Nodebais (Nodebeek), a hamlet of artists, part of Beauvechain (Bevekom)

In the late 1990's, when the 21st century was approaching, Beaucarne came up with the idea of  organizing a huge concert in anticipation of the coming century, a concert that should take place in the open air on a site with a circle of pagodas on it, which could provide the concertgoers with energy to find their way in the post-industrial world of the next millennium.

In this context, supported by volunteers and in agreement with the authorities, the circle of pagodas was installed on a field near the Ferme de Wahenge, a farm in the community of Beauvechain (Bevekom), about ten km away from Beaucarne's current home in Tourinnes-la-Grosse.

The 36 wooden structures that make up the creation, are assembled from 252 reels that in daily practice are provided with electricity cables, used in the installing of electrical networks.


Both the separate numbers in 252 and in 36 add up to 9, a number that for Beaucarne has a special meaning, since the death of his partner was caused by nine stabs.

Spiritually, the number nine, which is the last single number and a combination of other numbers (3x3), is seen as the number of perfection, or completion. Perhaps this was what Beaucarne wished the world for the 21st century. 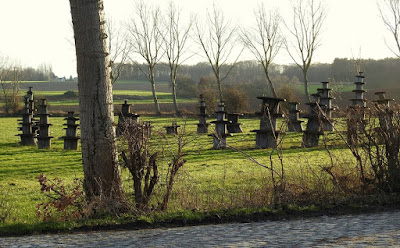 It was a festivity attended by some 3000 people, who not just may have enjoyed the music, but also may have experienced the magical atmosphere created by the presence of the pagodes and the generating of energy attributed to these structures.

In addition to the pagodas, the site also includes a few other structures, such as a huge tipi, a theater and an Izba type house that was built on the basis of the golden section.

Unlike Stonehenge, which attracts many visitors and especially during solstices is crowded by people who are spiritually engaged, the Circle of Pagodas has not become a busy site.

Documentation
* Biography of Beaucarne on Wikipedia (in French)
* Various entries on a weblog by Beaucarne
* Article (undated) in a weblog on Skynet
* Interview (2011) in a Belgian newspaper with a a variety of quotes by Beaucarne
* Article (January 2018) on the weblog of Ernst Gülcher (in Flemish)
* Movie (2017, 53'0 by Eric de Moffarts entitled l'Air de Julos (also available on DVD)

Julos Beaucarne
Cercle des Pagodes
near the Ferme de Wahenge
Rue de Wahenge 43,
1320 Beauvechain, Belgium
can be seen from the road
Posted by henk van es at 8:29 AM