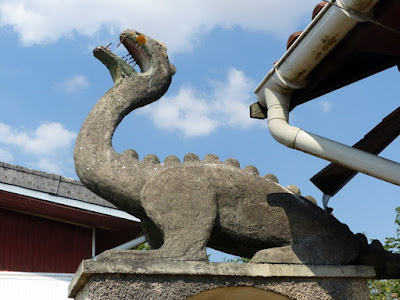 pictures courtesy of Sophie Lepetit, from her weblog

Jarny is a community of some 8000 inhabitants in the Meurthe et Moselle region in the east of France.

Along one of the access roads to the center of the town there is a house with a striking balustrade because of the large-scale sculptures on it, an art environment sometimes referred to as Les dragons de Jarny  (The dragoons of Jarny) 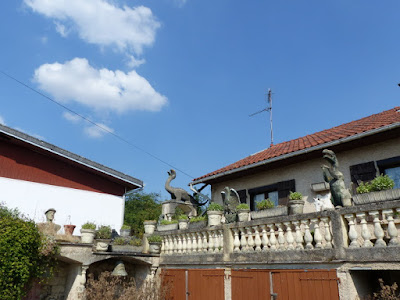 This art environment has been created by Sirio Nicoli (1920-2003), who was born in Italy and later migrated to France where he had a job as a miner. Except for these data and that he was married and had a daughter, the internet doesn't have other biographical information about Nicoli, not even when he started making sculptures.

His sculptures are not only on the balustrade, but they are also set up in the garden of the house.. Such as the sculpture below of a person wearing a mining helmet on his head, a creation that could be a self-portrait. 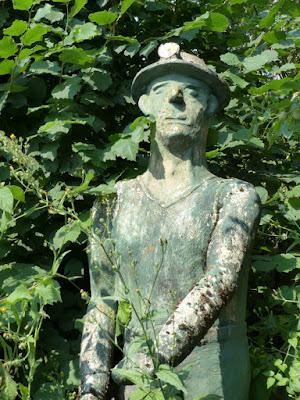 In addition to the miner's sculpture, the garden also includes other smaller-sized sculptures, such as representations of Egyptian deities and Buddhas.

The most imposing creations of course are the  sculptures of large animals. Those who lived in prehistoric times such as various dinosaurs in different poses, mostly provided with sharp teethes and fangs, but also animals that still live in our time, such as elephants, and then also fantasy animals, such as the dragon above the entrance portal. 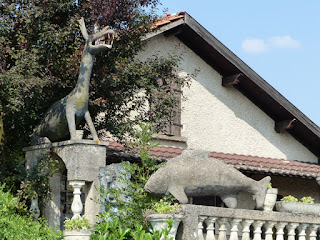 Nicoli made these extensive creations by first building up a rough shape by means of an infrastructure consisting of iron wicker, foam rubber from old mattresses and pieces of sheet metal, after which he finished this rough shape with cement and paint.

The prehistoric animals and the dragons were largely treated with green paint, with certain parts in an appropriate color, such as the teeth of the dinosaurs. 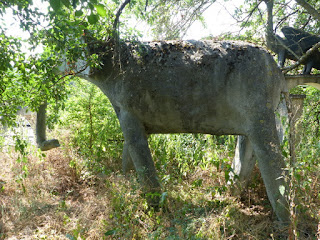 After Nicoli died in 2003, over the years the layer of paint has disappeared  and the sculptures now have a gray appearance.

In addition, the vegetation is increasing and threatens to overgrow the sculptures on some places. 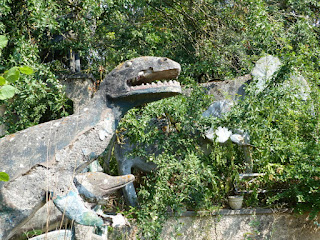 * Entry (June 11, 2019) on the weblog of Sophie Lepetit
* A series of pictures on the French forum website ombres et sentiments

Email ThisBlogThis!Share to TwitterShare to FacebookShare to Pinterest
Labels: exterior walls decorated with sculptures, garden with sculptures from concrete