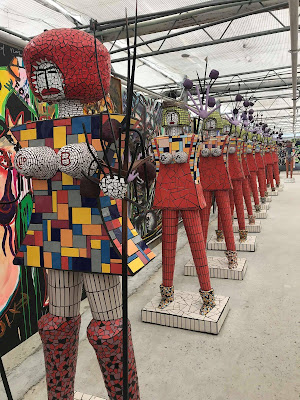 this picture and the next two thanks to Timo Reko

A part of the municipality of Midden-Delfland, Schipluiden is a village of some 4500 inhabitants in the Westland region in the Netherlands, an area known for growing flowers, vegetables, and fruit in greenhouses. Such a greenhouse located near Schipluiden has become known for a special collection of mosaic sculptures it includes.

It's an art environment created by Willem Berkhout, who was born in 1950 in Schipluiden as the fourth of seven children. His father owned a greenhouse horticulture business, so it was therefore obvious that Berkhout in his youth not only helped with the work in the cultivation, but that he also got an education at a horticultural school.

Berkhout married in 1976 and a few years later, together with a brother, he took over his father's company, growing  orchids from 1986.

Throughout his life Berkhout was provided with a lively imagination and when visiting museums during holidays he noticed that he was very interested in art, in particular sculptures, so at the start of the new century -in his early fifties and without any training as an artist- he began to make sculptures himself.
. 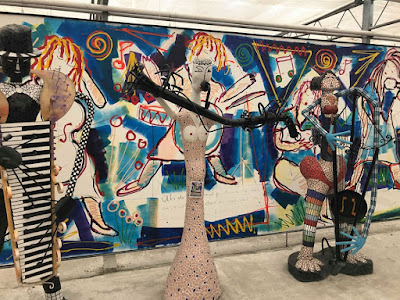 The mosaic is applied to a layer of cement that forms the outside of the sculptures, while the inside can consist of metal braiding, just as Berkhout for the infrastructure of his first sculpture used an old bed spiral. But it also happens that Berkhout makes his creations entirely from concrete.

The artist often visits thrift stores to get things that can be used in making creations, such as a number of colanders that could be used as helmets for the soldiers of the Spartan army present in the collection

From a stock of tiles Berkhout -using a tile cutter- carefully cuts the pieces of mosaic needed to decorate the sculptures.

Apart from the group of Spartan soldiers, there are other groups, such as the gods of the primeval Gaag (first inhabitants of the region), veterans in old wheelchairs. a circle of Westland bar women and a march of feminists,

Currently (2019) Berkhout has made some 200 sculptures that are lined up in the greenhouse. Around 300 large paintings by the Hague painter Jacob Kanbier hang on the walls. 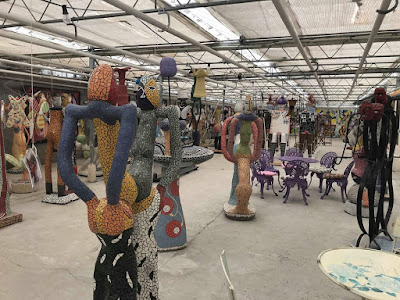 Berkhof's art environment has remained a secret for many years. In its first years the establishment and the growing size of the collection was only known by family and friends. However, in 2012 the artist decided to open the greenhouse to visitors.

Currently (2019) the site has become well-known in the region and it is visited by some 3000 people a year, both individuals and groups, such as clubs of cyclists, school classes and groups of people from a home for the elderly. 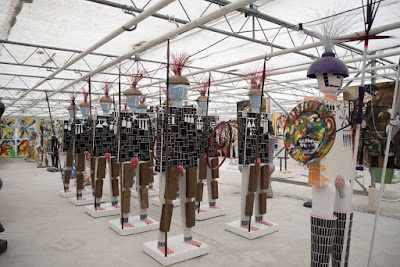 
The greenhouse is situated in a beautiful pasture area, but the location is somewhat isolated. From a provincial road (N468) a bridge (flanked by a sculpture) must be passed  and then via a dead end road one reaches after 650 meters the greenhouse.

As the video in the documentation shows, Berkhout at the end of 2018 sought publicity to announce that he is looking for a different location to accommodate the collection. 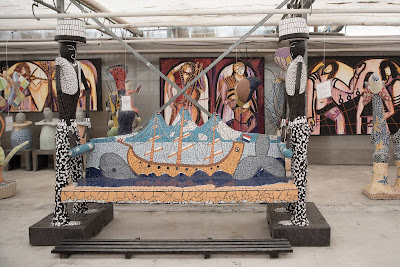 Documentation
* Official website of the Beeldenkas
* The site on Facebook
* Article (May 2017) in a regional edition of Dutch journal Algemeen Dagblad
Video
* Video (December 2018, 1'47")  by regional TV Omroep West on You Tube 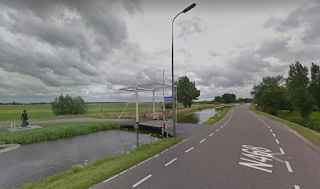 Email ThisBlogThis!Share to TwitterShare to FacebookShare to Pinterest
Labels: display of sculptures made from stone, indoor arrangement of sculptures