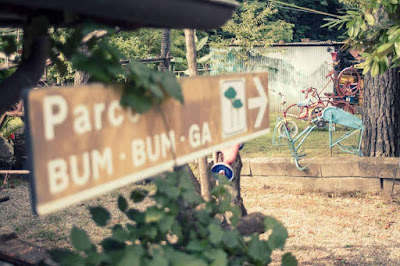 The art park of Carmelo Librizzi located in Montevarchi, Italy, not yet known in the field of art environments, has recently been spotted by Francesco Galli and described on his website.

Carmelo Librizzi was born in 1949 in Petralia Sottana, Sicily. In the 1950's the family migrated northward to Tuscany, where they settled in Montevarchi, a city of around 24.000 inhabitants, located some 50 kms south-east of Florence. 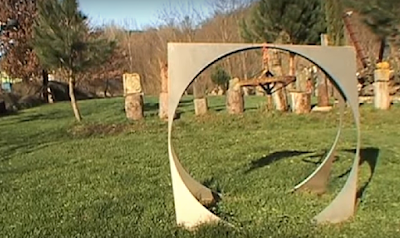 this picture and the next one: screenprints
from the video by Roberto Polimeno in the documentation

Librizzi grew up in a very musical family, so already as a child music got his great interest and he started making music. playing a clarinet in particular. Living in Montevarchi, he was able to further develop his musical qualities by playing in the Corpo Musicale “G. Puccini". This popular local orchestra, in the period 1946-1963 conducted by Maestro Ugo Canocchi, also includes a music school where youngsters can study music.

In later decades Librizzi, who meanwhile had exchanged the clarinet for a saxophone, participated in various Italian bands. He was very interested in free jazz and experimental music and also acted as an arranger. 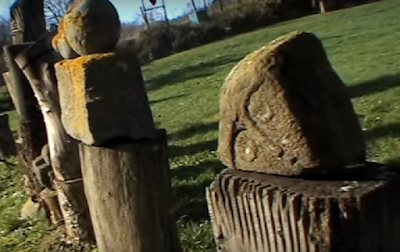 Librizzi had a wide interest in art. He also loved poetry and sculpture and after studying precision mechanics he also studied processing metal, stone and wood. Along this way he came to actually making sculptures himself. 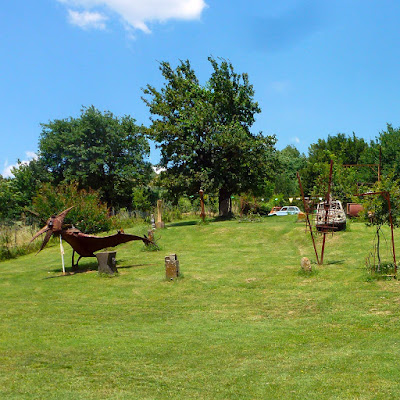 this picture and the next three
courtesy of  Francesco Galli

His sculptures, in wood, stone and metal, partly have a reminiscence with an "archaic" way of working and partly have a modern, conceptual and recycling-based approach.


In 1979, when he was around thirty years old, Librizzi came up with the idea of opening an art park where he could not only display the sculptures he meanwhile had created, but where also artistic happenings could take place, such as exhibitions and music performances.

The park was realized on a plot of land of some 10.000 m² outside of Montevarchi. Librizzi planted trees that became large oaks, he sawed pine nuts that currently are big pines, and there are fruit trees. 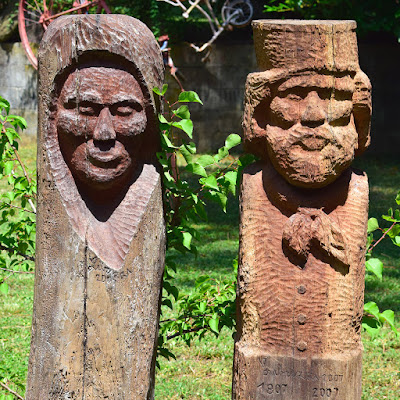 The site got a name Librizzi loved because of its attractive rhythmic connotation: Bum Bum Gà, derived from the name of a small railway station in Austalia as present in a 1972 movie by Alberto Sordi.

In addition to the large size of Librizzi's artistic work, the arrangement of the works in this art environment also shows its diversity, both in terms of the varied use of materials, the style of work and the themes. He expresses himself equally easily in a figurative, realistic as in a conceptual way, and the visitor sometimes has to give an interpretation of the artwork himself.

For example, the heap of old bicycles maybe expresses Librizzi's message about the need of recycling and may invite to think about our modern lifestyle and the world in which we live, but at the same time it can been seen as a tribute to the cycling sport and evoke thoughts to the famous Italian rival cyclists Gino Bartali and Fausto Coppi. 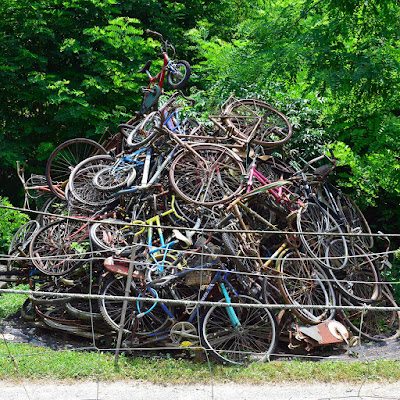 Initially, the public expressed little interest in the art park, although Librizzi tried to involve the residents in the area with flyers and leaflets, but over the years, especially in the summer months, the site became a lively meeting place, with exposition, theatrical performances, concerts of groups of young people, meetings of owners of vintage cars, and so on. 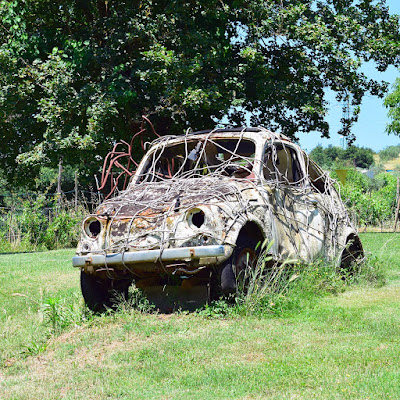 40th anniversary of the Art Park

In 2019 Librizi's Art Park existed for forty years, which was celebrated in July with a festive gathering.

The video below (from Facebook) shows a moment of musical pleasure

* The Parco d'Arte Bum Bum Gá on Facebook
* Antonella Fineschi & Carmelo Librizzi,  "Ma quanto costa il pane? ("But How Much is the Bread?"), biography of Carmelo Librizzi (available at the Park)
* Maria Giovanna Cutini article (April 2013) in Top Life Magazine
* Interview with Librizzi (June 2016) in Italian webzine Backstage Press
* Francesco Galli, "Bum Bum Gà, La passione del fare", article (July 2019) with photos on his website
Videos
* In addition to the videos presented below, You Tube also has a video made in 2012 in which Librizzi  talks about his work (in Italian)
* Video by Roberto Polimeno (September 2011, 1'52", You Tube)