The above pictured structure of stacked stones, a creation by René Morice, is part of a large series of built stone structures, predominantly situated in roadside alignments.

The following screenprints (via streetview, 2013) give an impression of the specific lay out of the component parts of this art environment, that is located in Kerbescond, part of the community of Pommerit-le-Vicomte in Brittany, France. 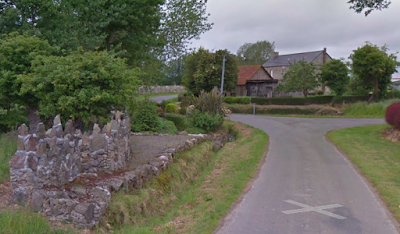 Taking the first road left on the road from Pommerit-le-Vicomte to Saint-Gilles-les-Bis (D65), one soon arrives at a first triangular part of the line-up, left from the road just before a junction.

Going left at the junction one passes by Morice's farm on the right, with an arrangement of stone structures at the front of the living house, and also ....

..... at the left of the road, opposite the living house,  another triangular arrangement of structures .... 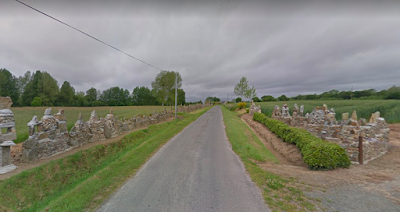 ......and then past the farm the next parts of this art environment are located left and right of the road, with the alignment on the left side of the road extending approximately 200 meters.


Born in 1930 René Morice became a farmer living in the outskirts of Pommerit-le-Vicomte, a small community of some 1800 inhabitants near Guingamp in the Breton department Côtes-d’Armor

Once retired, probably around the turn of the century, he experienced that he had little left to do and so in 2005 he started cleaning up the space around the farm where he lived. In the process, he began to tidy up a fountain in front of the farm, leaving a pile of stones that somehow put him in a creative mood

So Morice started to put bricks together, using cement, forming structures that sometimes depict a certain character, and sometimes only have a spatial shape. He made single, stand-alone structures, but usually he united a number of structures into ensembles, sometimes using iron as a connecting material. 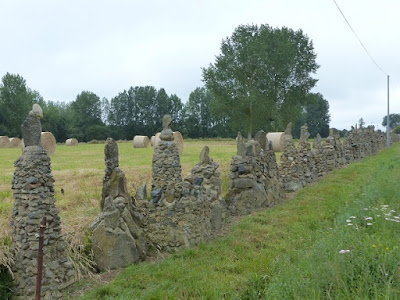 This can of course be related to the space that Morice had at his disposal, but it is also tempting to see a relationship with the alignments of neolithic stones that form a characteristic (and famous) spatial element in Brittany.

Other observers, watching the creations in line, got an association with a crowd, gathered at the edge of the road, waiting for the passage of any event.

But perhaps this is all too far gone, given Morice's statement in an interview:

J’ai fait ça grossièrement, sans trop m’appliquer ! Si j’avais su que cela attirerait les regards, je me serai appliqué un peu plus (I did this roughly, without applying too much! If I had known that it would attract attention, I would have applied a little more). 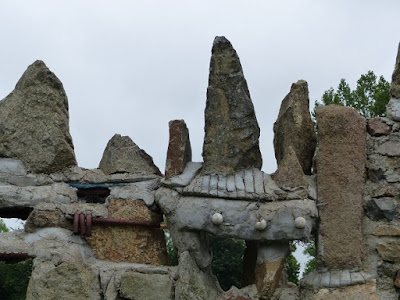 Morice gave this interview in 2017. At that time he was 87 years old and he had worked for about twelve years on the art environment, which since the start in 2005 had got a large size, with its alignments with a length of over 200 meters.

So in his late eighties Morice decided to end the further expansion of the site, partly because of his age, but also because the company where he bought the cement was closed.