In the field of art environments it is not uncommon that after the death of the creator of a site, the creations get lost due to neglect of the site or sale of the property that houses it.

But luckily there are  exceptions. Art environments can retain their appearance in various ways, sometimes in part, as is apparent from the way Johannes Ivakko’s sculptures have been saved. 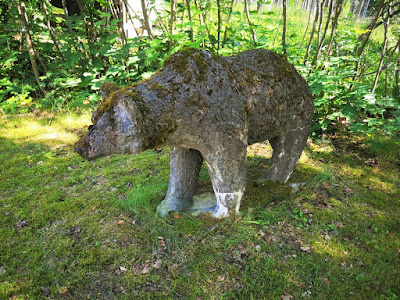 Born in 1914 in Salmi on the Lunkula Island in the area of the Gulf of Finland, Johannes Ivakko as a young man became a fisherman who lived in Lunkula, a small village located in the north of the Lunkula Island.

In the 1930s there was much disagreement between Finland and the USSR over the course of the border between the two countries and at the beginning of 1939 the situation was so tense that Finand started building defenses in the area of the Gulf and evacuated residents of some islands, also the one where Ivakko lived.

On November 30, 1939, the Soviet Union did invade Finland indeed. In the following Winter War the Finns offered much resistance. but in March 1940 they had to surrender. The island where Ivakko lived would eventually become part of the Soviet Union.

Johannes Ivakko belonged to the evacuees who established themselves in the Päijät-Häme region. He settled in Lahti, a city some 100 km north of Helsinki. Here he would live for the rest of his life, working in various jobs, such as carrying out work for New Valamo monastery, working as a repair/service man, taking care of the maintenance of forests, doing the management of a campsite, and then he was also active as a fishing man.

In Lahti he also became active as a self-taught artist. First of all, he focused on making miniature wooden sculptures depicting objects, personalities and activities that reminded him of the Lunkula Isle where he was born and raised, for example a scene of a family seated around a table or a series of boats, both small ones and large fishing boats.

A selection of these creations has been exposed in 2005 in the Kiasma museum in Helsinki at the exposition In another world, the first major exposition of outsider art in Finland. Recently (in 2018) these small sculptures could be seen during an exposition at the Kokkola outsider art museum.

He had a workplace near his house in Myllypohja, one of Lahti’s neighbourhoods. The sculptures, once finished, would be displayed in the yard of the house.

It also has been reported on the internet that some of Ivakko’s sculptures have been displayed on several locations in the public area, like spots on the roadside and in markets. And some sculptures have got a place in the courtyard of the New Valamo Monastery in Heinävesi. 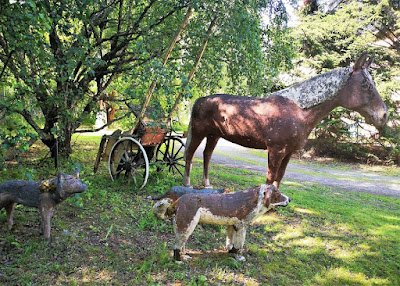 But currently the most important location, where the majority of Ivakko’s legacy of sculptures has been displayed, is the Radiomäki Park in Lahti.

It is a green, partly wooded area in the city where a sports accommodation is located, but also buildings and installations that traditionally are related to Finnish radio and television, such as the radio and television museum and a yard with a hill where dishes for telecommunications are installed.

At the foot of that hill a variety of Ivakko’s concrete sculptures has been exposed, as the photos in this post show. 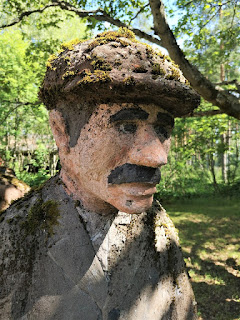 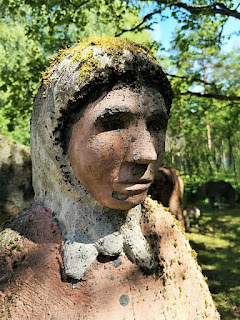 One can see life- size sculptures of cows, horses, reindeer, elk, but also of smaller animals such as a dog, a fox or a cock.

There are also sculptures that depict personalities such as the farmer couple (close ups above) and a hunter confronting a bear and the farmers couple (pictures below). 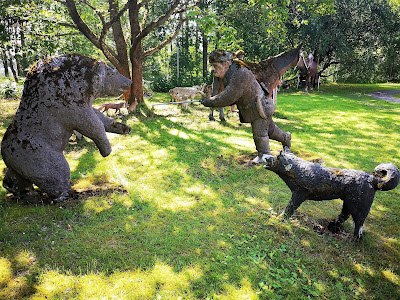 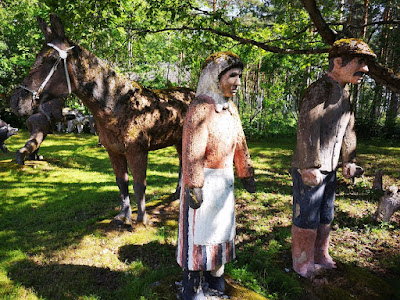 When after Ivakko’s death it was not possible to preserve the arrangement of stone sculptures around Ivakko's house, the Lahti City Museum (which also has a lot of Ivakko’s mini-sculptures in their collection) took care of the concrete sculptures and found an excellent solution to expose them at the grounds of the Radiomäki Park, which can serve as an example for other communities in Europe.