In the summer of 2019 when traveling through Northern Ireland with his galerie ambulante in the context of his project Grande Bretagne Insolite ¹, the Frenchman known as Tiramisu Bootfighter unexpectedly encountered an art environment in the capacity of an ensemble of life-size fairytale houses.

This site, which taps into Ireland's heritage of myths and legends, was installed by Sean McKeown in the backyard of his house in the village of  Newtown-Crommelin, which is part of the Borough of Ballymena in County Antrim, Northern Ireland.

McKeown was a bricklayer, who in 2015, at that time being unemployed, stumbled upon a large tree stump in his garden and felt inspired to pick up his tools to turn that stump into something magical and fairytale-like.

He constructed a large scale fairytale house and liked doing this so much that he began a project that would keep him busy the following years and that resulted in the transformation of his backyard of about six and a half acres (some 20.000 m²) into an art environment with a series of wooden fairytale houses.

He named his garden with fairytale houses Littleworld, opened it to the public, got publicity and soon the site became known as an attraction for school classes, families with children, tourists and other interested people.

The largest fairytale house, sometimes considered as the largest in the world, was made from a Red Sequoia tree. It has a little rounded door and small, quaint windows. Inside four adults can stay.

Using tree stumps from oak, beech or silver birch and unused remains of woodworking companies, up till now (2019) McKeown has constructed houses with a height of 9 to 15 feet (2,7 - 4,5 meters)

These fairytale houses are designed in such a way and provided with such small details that on the spot a fairytale-like atmosphere is evoked that appeals to the imagination, just as also often appears in the illustrations of fairytale books, for example as in the work of the english illustrator Arthur Rackham (1867-1939). 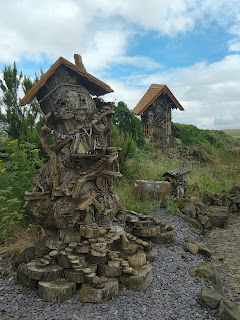 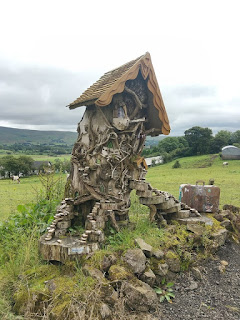 The pictures left and right above and especially the details in the picture below give an an idea of McKeon's working method to express the specific fairytale atmosphere.

McKeown is full of ideas, like at the time this post was published  (summer 2019) he is working out a plan to add a tunnel that starts at the main fairytale house plus some three more, one for each season, an arrangement that would become kind of a Disney World underground.

His plans include that the underground complex also has a sensory tunnel for disabled children and all together the new complex of  fairytale tunnels should rank as the largest in the whole of Ireland. 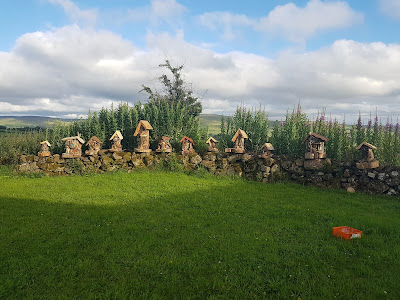 McKeown also manufactures miniature fairytale houses that visitors to the site can purchase, an offer that some visitors enthusiastically use to come into possession of a handmade fairytale house to decorate their own house or garden. 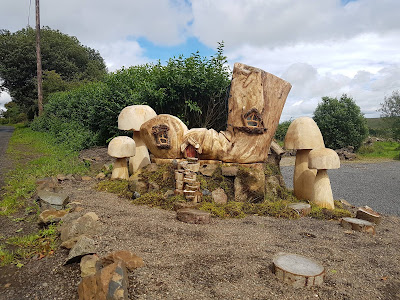 note
¹ reports of the trip are published on Facebook, while photos taken during the trip can be found on Instagram via #grandebretagneinsolite