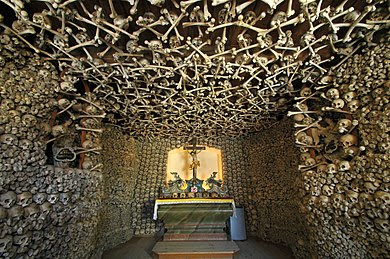 Among the various ossuaries that Europe knows, there are some with such an arrangement of skulls and bones that one can speak of an art environment. This weblog already has a post about the ossuary in Sedlec, Czech Republic, a site that could rank as the most decorative in its genre

The following post is dedicated to the ossuary in Czermna, which was originally on Czech territory, but -due to border corrections- is now in Poland. 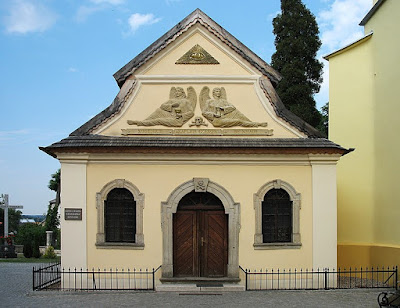 When in the mid 1770's Bohemian local parish priest Václav Tomášek (? - 1804) made a walk in the fields around Czermna on some spot he stumbled upon the bones of a buried person and he found out that this spot contained a mass grave.

And this was not the only one in the area. Wars had raged there, such as the Thirty Years War (1618–1648) and three Silesian Wars (1740–1763). The fallen soldiers were buried collectively in mass graves, as well as victims of cholera epidemics and massive food shortages among the local population.

Priest Tomášek came up with the idea that the remains should be cleared and housed in an ossuary in a small chapel to be built between the existing St Bartholomew's village church and the tower standing apart from it.

With the financial support of the local benefactor Leopold von Leslie, the chapel could be built. In 1776 the building was ready and Tomášek, together with grave digger J. Langer. started the design of the ossuary. a project that would last until 1794. 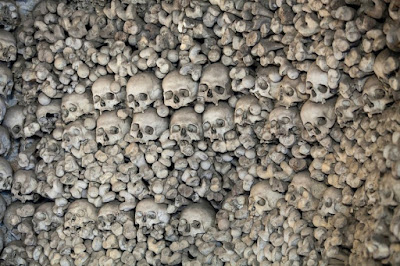 The decorative aspects of this ossuary are much less pronounced compared with those of the site in Sedlec, but it can be recognized that Tomášek has tried to make specific decorative arrangements when adding the around 3000 skulls to the ossuary.

As can be seen in the first picture of this post, the standing wall behind the altar is largely filled with skulls in a coherent uniform whole. This picture also shows that the top of the display of skeleton parts almost exclusively consists of an arrangement of crossing bones. The picture below shows the crossing bones in more detail.

A skull with two long bones crossed below it manifests a typical symbol of death (and can have a strong warning character, as in a pirate flag). Unlike the ossuary in Sedlec, the photos of the ossuary in Czaszek.hardly show this arrangement.

Along the walls the skulls predominantly have been placed in horizontal rows amidst larger rows consisting of smaller parts of the skeletons.

In all arrangements the repetitive aspect is clearly present, and for the rest the total presentation is mainly characterized by simplicity, which can also be an aversion to excess. 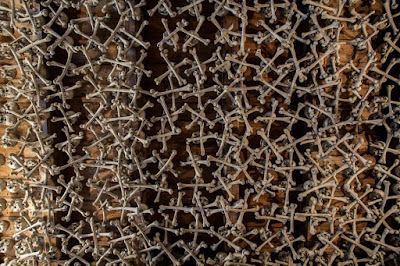 This simplicity also applies to the other elements in the interior. There is a simple altar, with some skulls on it, including that of Václav Tomášek. There are also two wooden sculptures of angels, one with the Latin inscription Arise from the dead, the other with the inscription Go to the judgment.

In addition to the 3000 skulls and associated bones that have been incorporated into the interior, a room beneath the chapel accommodates 21000 other remains.

Once a year, at midnight from 14 to 15 August, a mass is served in the chapel for those whose remains have found their last rest in this chapel.