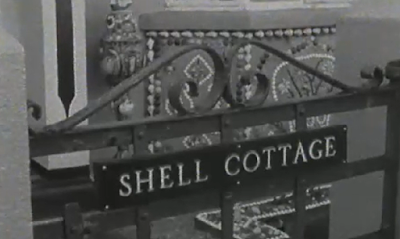 The photo above shows the entrance to the Shell Cottage, a residential home in the coastal town and harbour Dungarvan in County Waterford on the south coast of Ireland. transformed by its inhabitants Mary and David Foley into an art environment.

The Shell Cottage is a simple rectangular house with a hipped roof. At the front there is a central door with bay windows on both sides and the small yard around the house is surrounded by a low wall with an entrance gate in the middle. 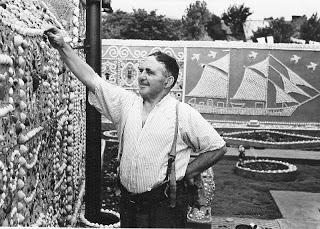 David Foley was born in Dungarvan, in 1894 or 1893. It has been reported that in 1915 at age 21 he had his first voyage at sea with the schooner Catherine Ellen. Later he would become captain of a ship named Harvey. The Dungarvan fleet in those years was mainly engaged in transporting merchandise such as coal and agricultural products.

The internet does not state in which year David Foley married Mary, but if this happened when both were in their twenties, they would have been married for some thirty or forty years when in 1954 the couple started to decorate their house. 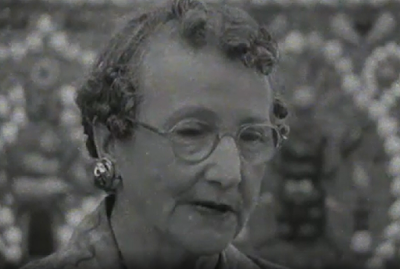 David Foley meanwhile was retired and the couple initially had the intention just to create a shrine in honor of Our Lady. But as so often happens in the field of art environments, once started they could not stop and so it became a project that kept them busy for many years to come.

David Foley has been active in decorating most exterior walls of the property with shell decorations until he died in 1962. After his death Mary Foley has continued the project in the following years. A film about the site made in 1966 by Ireland TV shows that in that year the project had reached its final size and mainly required maintenance.

Some features of Shell Cottage

The way in which the decorations of the Shell Cottage are processed has some specific characteristics. 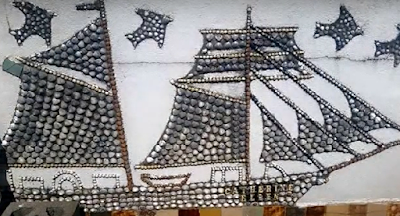 So there are some distinctly realistic representations of ships that have played an important role in Foley's life, namely the schooner Catherine Ellen on which he started his career as a young man ..... 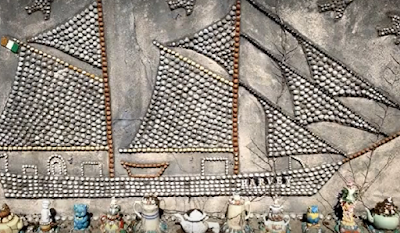 ...... and the ship named Harvey from which he was the captain. 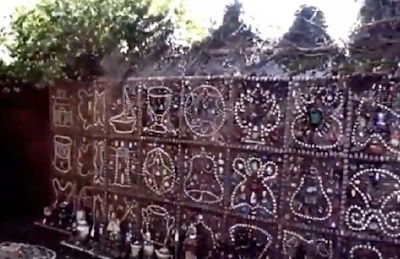 Then this art environment has a large number of wall decorations that are encased in similar, almost square frames.

The shells may have been arranged into a figurative or realistic scene (such as a vase or a bird)  against a dark background as in the picture above. 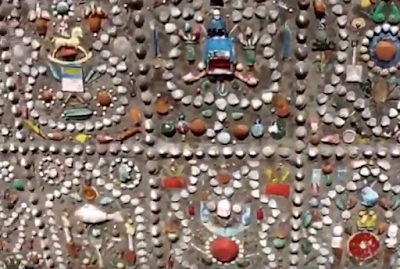 But there are also many parts where the shells are arranged against a light background, brightened up with countless colorful small items, as in above picture.

The fact that the decorations are set in almost uniform frames is due to the method of preparation. The designs would be drawn on paper and then transferred to a standard sized cardboard that was used as a template for the decoration to be applied. 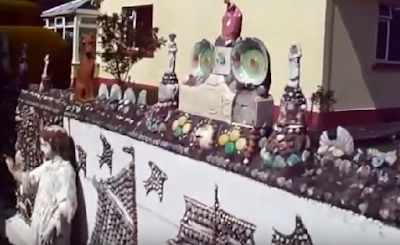 
Arrangements of antique statuettes are a final feature of this art environment.

These statuettes are particularly placed (and firmly anchored) on the low walls to the left and the right of the house that surrounds the yard.

Actual situation of this art environment

It is not known whether, after Mary Foley died, there were heirs and the property remained within the family. Anyway the videos from 2007 and 2015 show that the site has continued to exist in almost the same capacity as in the 1960s and 1970s. 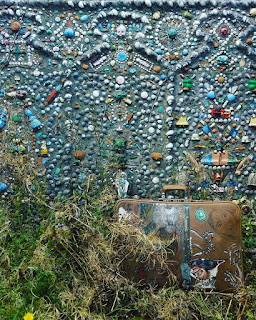 There is also photo material on Facebook from August 2019 by Tiramisu Bootfighter (La Valise, Galerie Ambulante), that shows that the site was extant at the time this post was published,

Documentation
* Ireland TV in 1966 interviewed Mary Foley, but the video in B/W -on this website-  cannot be embedded here, which is a pity because it has shots of the decorations as in 1966, just as the website has a short description of the site
* Abbeyside Heritage Archive weblog, december 2011, has a short referral to David Foley
* The website Friends of Purton has the story of the ship Catherine Ellen and its crew, including David Foley (the Shell Cottage is also referred to) 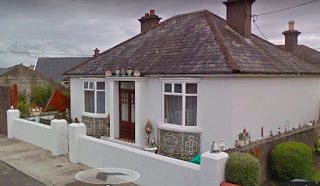