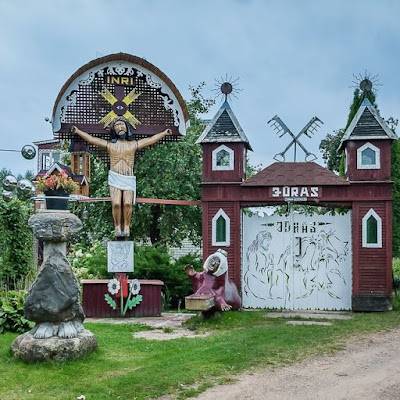 Vecumnieki is a community in Latvia of around 2100 inhabitants, located some 50 km south of the country's capital Riga. In the rural area north-west of the community a collection of wooden creations catches the eye. This is Juris Audzijonis' art environment generally known as Jūras, God's Garden, a park with a variety of single handedly made wooden and metal creations. 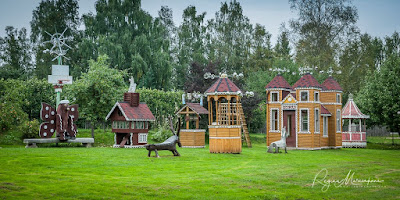 When he was in his early fifties the life of Jūris Audzijonis, who was born in 1942 or 1943, took a special turn. During a cardiac arrest that had hit him, he had a beautiful vision that he experienced as the divine light that brought him back to life.

Prior to this experience he was not a believer, but now he was converted to the Christian faith, and moreover, he also felt inspired to propagate that belief by making and installing creations that reflected that belief.

In 1996 Audzijonis started a project that has kept him busy until now (2019) and that has resulted in a park-like art environment that includes single-handedly crafted wooden sculptures, metal assemblies and singular architecture in various forms. 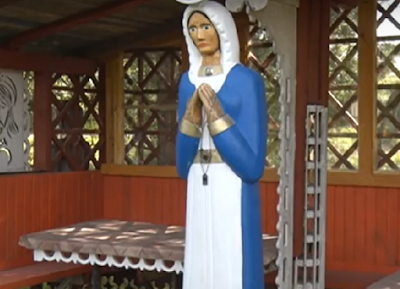 As the picture of the entrance (at the top of this text) shows, Jūras is the original name of the site. However, after a journalist, with the approval of Audzijonis, designated the site as God's garden, this name was widely used in addition to the original name.

The most pronounced reference to the Christian faith in this art environment is the life-sized sculpture of Jesus on the cross, placed directly next to the main entrance of the site.

Then there is a wooden sculpture of the Virgin Mary, also life-sized, about which the story goes that a miracle happened with this sculpture when two holes in the wood near the heart opened and resin began to flow out of those holes. 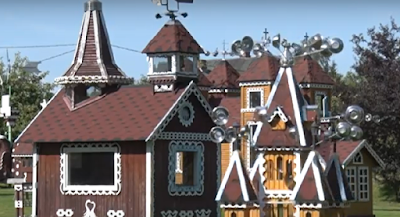 The Christian character of the site is also expressed in the built structures Audzijonis created, first of all a number of churches or other places of worship, such as the one as in above picture with towers at the front- and backside, that are covered with hexagonal spires.

One of the built structures is a small wooden prayer house where at most one visitor can sit on a chair (that turns around three times) to pray or meditate.

One day a number of students came to visit the garden, waiting patiently in a row at this prayer house. Audzijonis wondered what happened, but it turned out that the students had to take an exam the next day and came to ask for a blessing. 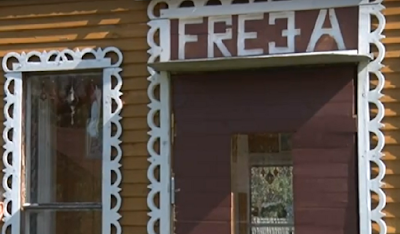 Among the buildings in the capacity of a church there are large ones such as the aforementioned church with the four towers, but also small ones, such as the one in the picture above built by  Audzijonis for his granddaughter Freya on the occasion of her fifth birthday. 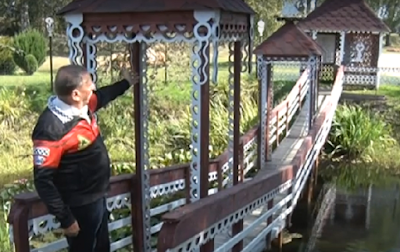 Other striking wooden constructions in this art environment are an above pictured elongated bridge that crosses a pond ........ 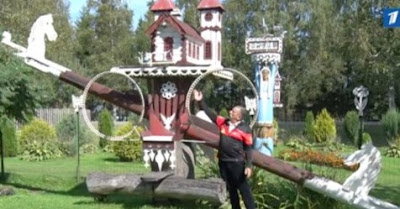 ..... and a large-scale seesaw pictured above, suitable not just for two children, but also for two adults, a device that when used exerts a calming effect on the participating persons. 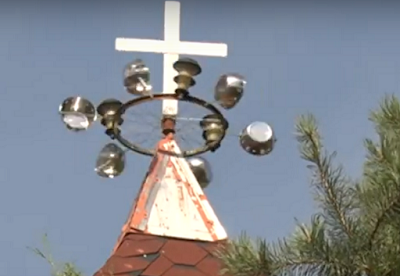 Above picture shows the spire of the tower of the large wooden church with four towers crowned with an installation formed by rotating metal items, typically assembled by using leftovers, in this case metal pans

The site has a variety of such mobile items. For example, there is a high rising towery structure with an immobile pedestal and an upper part - provided with metal protrusions in the form of blades - that can rotate in its entirety.

And there is a wooden gazebo that also can turn around in its entirety. 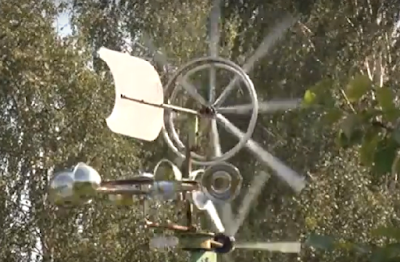 Above picture of an all metal windmill with blades that turn in the wind, shows that Audzijonis who in reviews is mostly presented as a woodcrafter, also knows about handling metal parts.