The picture above shows an art environment facing the Atlantic Ocean, located in the Icelandic capital Reykjavik. This is Raven's Nest, a site created by Hrafn Gunnlaugsson.

Gunnlaugsson, born in Reykjavik on June 17, 1948, after his primary education studied in Stockholm, Sweden, both at its university and at its Dramatic Institute where he qualified in film making and directing.

In the 1970s he became a well known film maker, who made the Icelandic film industry internationally known by his films, some set in the Viking era, others in modern Iceland. 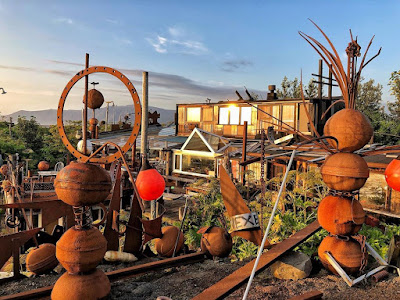 this picture and the next two by Kirill Voenbrand, Instazu


Gunnlaugsson married Edda Kristjánsdóttir and the couple would get four children.

In 1977 he bought the house and the surrounding terrain that he in the course of the years would transform, into an art environment. The property is located on Reykjavik's edge, a spot with a lot of history, as it once housed a hospital, a cemetery and the barracks of the British Army during World War II.

Due to the purchase, the municipality's plan to demolish the building was canceled. 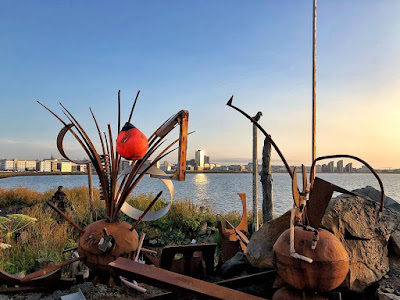 Gunnlaugsson likes to collect all kind of things. In an interview he said: “I was given the name Hrafn. That means raven, I think it goes with the name: Ravens like to collect things. Maybe I can blame the habit on my name.”

So, this art environment is a multifaceted collection of all kinds of collected items.

A rusty Viking warrior, standing on a corner, greets the visitor, a raven on the roof keeps an eye on things, there are Norse gods, Christian deities, and Buddhist icons, there are also sculptures made from old ship parts, some 160 massive stones from various regions in Iceland lay around, iron installations with large round balls stand between the plants and decorate the roof and a balcony ......

It is a collection which is constantly evolving and changing in composition, difficult to describe thematically. but one in which each item indeed has its own place and is part of all those things with which Gunnlaugsson has a trusted relationship. 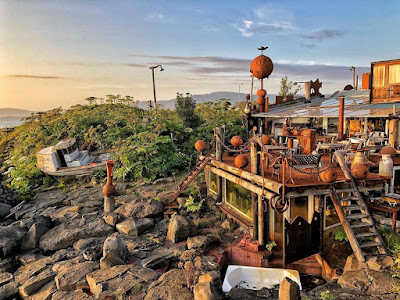 The residential home is in the center of the site. Its outer walls are decorated with tribal masks and religious talismans.

The ground floor of the house has no interior walls that divide the space, a remnant from earlier times that has remained unchanged.

So kitchen, dining room and sitting area are all located in one space, which of course also includes various collections, such as an an array of antique collectibles in the kitchen, canvas paintings of ravens, reproductions of French painters, all sorts of things made by the children in their early years, and lots of books and films. 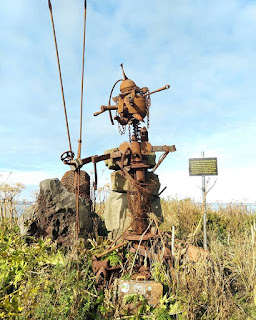 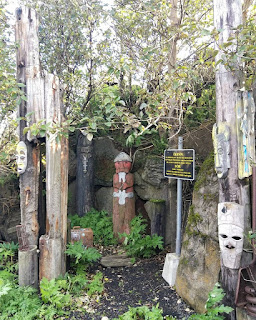 The two images above (left some wooden sculptures, right the Viking Warrior) and the two below were made in September 2019 by Tiramisu Bootfighter, a Frenchman who traveled through the United Kingdom and Iceland with a Galerie Ambulante (that is, his suitcase) for a many weeks in search of unusual places. 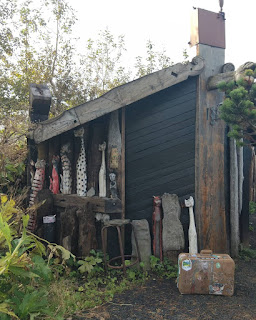 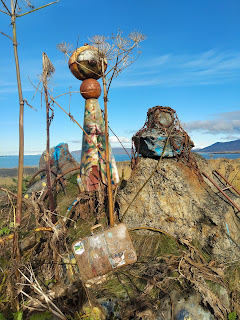 Every year the site attracts a variety of visitors. A side road of the main road Laugarnestangi leads to  the house along the coast.

Hrafn Gunnlaugsson
Ravens nest
along a side road of main road Laugarnestangi
Reykjavik, Iceland
can be seen from the road
streetview