Nizhne-Ivkino, a small community with some 2000 inhabitants in the Kirov region in the central-eastern part of European Russia, is not only known as a health resort, but also because of one of its inhabitants, the self-taught artist Anatoly Anatolyevich Serebrennikov.

Born in 1948 in Mukhino, also a community located in the Kirov region, Serebrennikov had a difficult childhood because his father died at an early age and as a young boy and only child he had to help his mother with obtaining income. After his military service he studied at the Kirov Agricultural Institute and worked for 25 years as a director of one of the subsidiary companies.

When a project started to re-forestize the Nizhne-Ivkino area, he became involved because of his expertise and went to live with his wife in the village. Later he got a job at a health resort in the village where he took care of the gardens.


From childhood on Serebrennikov had a love for the Russian countryside and the Russian culture, which manifested itself in various ways. such as a preference for reading Russian classics, but also in all his life collecting utensils that shaped peasant and country life, such as barrels, pods, spinning wheels, tumblers ...... 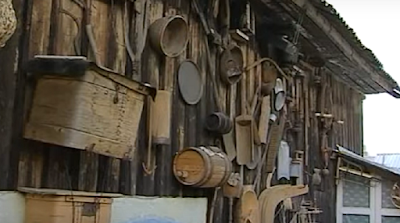 Nowadays, many such attributes are attached to a side wall of his house, as in above picture.

The facade of the house has left and right a wooden caryatid and an atlantid, both made from one piece of wood. These two creations seem to support the scene right under the roof, a scene that depicts a domestic situation, with a mother sitting on a spinning wheel, a father working on a painting, a samovar in the middle and above that a basket/crib with a baby. 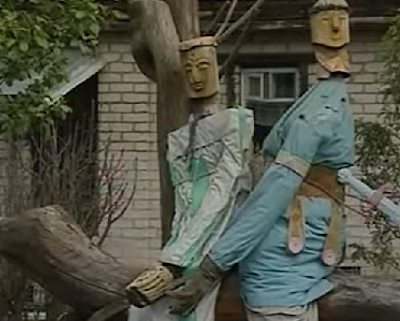 There are various sculptures that refer to people who are known from Russian classical painting, such as Ivan Tsarevich on the gray wolf, after the painting from 1889 with the same name by Viktor Mikhailovich Vasnetsov.

There is also a reproduction of the noble lady Praskovya Morozova, depicted on Boyar Morozov, a famous painting created between 1884 and 1887 by Vasili Surikov.

Other creations refer to Russian classical literature, such as a mermaid, a goblin and a cat on a
chain -characters from the work of Pushkin- added to a tree near the entrance of the site. 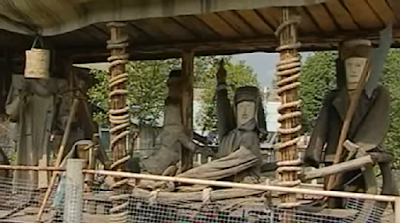 Then there are ensembles, such as the one shown above. The two enlargements below give an idea of how Serebrennikov portrayed the characters. 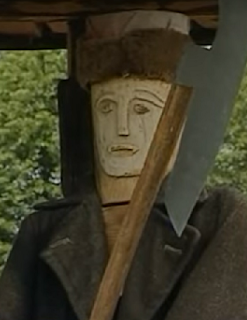 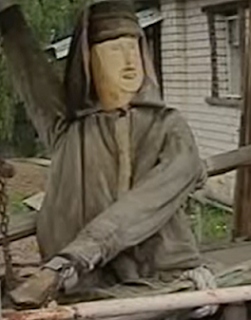 Serebrennikov also became known for his monument to the potato, which he began to make around 2005.  It's an ensemble of a white stone with the words Make a deep bow to the nurse, a pot with baked potatoes and a branch connected with a shovel and a pitchfork. A man with a staff, in a padded jacket and bast shoes kneels in front of the ensemble.

The monument is dedicated to the 60th anniversary of the Russian victory over Germany in World War II.

The news about this creation spread and Serebrennikov was invited to participate in a much-watched Russian television program about a healthy lifestyle.

He traveled to the studio in Moscow with three kilos of potatoes, dressed in an old-fashioned peasant's shirt, which he had put together himself (Serebrennikov likes to make clothes with his own hand and without sewing machine, also special ones, such as a dress á la Pushkin, with a long black suede coat and a top hat). 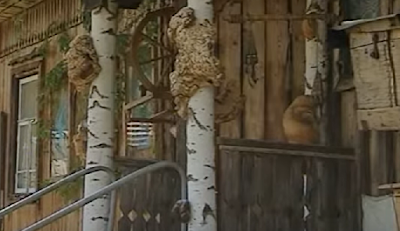 Paintings of nails with a head

Around 2000 Serebrennikov saw a portrait of Leonardo da Vinci, made by a medieval master who used nails instead of paint. This inspired him to make such creations himself.

In the meantime, Serebrennikov has made a number of portraits of this kind, including one of Putin and another of the Patriarch of Moscow.

In January 2018 he showed in a local museum a nail portrait of the in Russia famous opera singer Fedor Chaliapin (1873-1938). The portrait includes 7465 nails, placed on a 2 m long and 95 cm wide panel of lime wood

In the video below (2'28", YouTube, March 2018), Serebrennikov shows and discusses this creation. The portrait of Putin can also be seen

Documentation
* Article (February 2019) in regional newspaper Komsomolka Pravda
* Article (undated) in Liga Press, with info about the monument to the Russian potato
* Article (March 2008) on website malahov-plus, especially about the TV performance

Videos
* Video by Russian TV 1 (3'40", YouTube, around 2014), with an impression of the creations in the garden around the house

can be seen from the road
Posted by henk van es at 8:37 PM