Osny is a community in France, located some 30 km northwest of Paris. The community currently is part of Cergy-Pontoise, a suburb of the capital that began to emerge in the 1970s.

When in 1964, Georges Maillard (born in 1932) bought a piece of land of some 1000 m² in Osny, the community was surrounded by an area with a rural and woody character, because at that time the urbanization had yet to begin.

He bought the site to establish there a country cottage (in French a cabanon), a place for relaxation. Later, in 1968, he decided to locate a house on the property. He started living there in 1972. 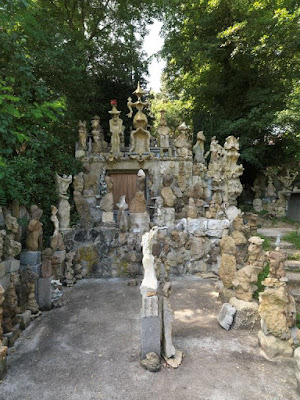 Maillard was a postman with an artistic slant. He loved photography, the theater and writing, but making sculptures became his favorite activity, in such a way indeed that he transformed the undeveloped, partly upwards inclining part of his property into an art environment.

The available documentation does not state when Maillard started working on his art environment. It is possible that it was when he moved into the house in the early 1970s, because it has been reported that one of his first creations included a letterbox, and then a box that was decorated in a special way.

The pictures in this post demonstrate the specific character  of the sculptures Maillard created. In the fields around Osny, but also on chalk cliffs along the coasts of Picardy and Normandy, he went in search of stones, especially sandstone and sometimes millstone, and especially those with a special shape or profile, so that, when combined, they get kind of a human or animal look,

Because the stacking consists of around two or three stones, the sculptures appear in a modest size, which also adds to their charm. 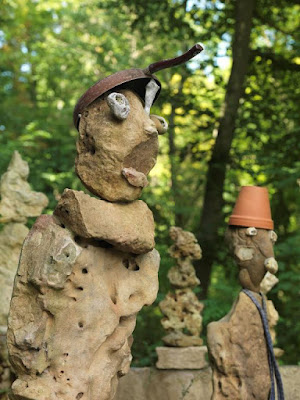 In addition, Maillard treats the creations with humor and playfulness by providing some with attributes such as a baking pan as a helmet, a flowerpot, a funnel or a scarf. 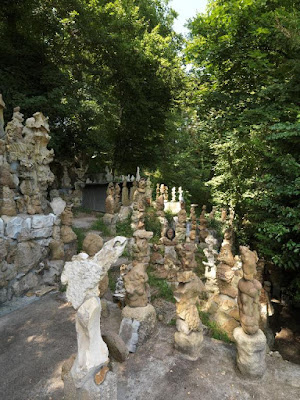 Looking at the accompanying photos, it is striking to see how naturally the various sculptures take their place and relate to their neighbors, as if they were not grouped by human hand, but are a collective of personalities, busy with all kinds of activities, stiffened for a split second in the click of a camera.
Incidentally, here is also a relation with Mallard's love of  photography and the theater, in particular the aspect of staging amidst sets.

In the available documentation, published around 2012, it is stated that Maillard has also made some wooden sculptures, one of which still existed at the time, while he also must have made concrete sculptures. However, it's evident that around 2012 the stacked stones already form the dominant aspect of this art environment.

An image on Streetview in 2019 of the garage of the house, with unscathed sculptures on its roof, gives the impression that the site is still in its original state. And indeed, some time after this article was published, a reader from Osny reported (July 2020) that Maillard, at age 87, was still active in embellishing his art environment.
Documentation\
* In an article in his weblog (October 1, 2020) De la sculpture automatique, un masque du facteur Georges Maillard  (Automatic sculpture, a mask by the postman Georges Maillard), Bruno Montpied discusses some of Maillard's sculptures.
* Entry about Maillard on the website Inventaire du Patrimoine, Île-de-France (file about Maillard realized in 2012)

* The above Inventaire includes an  article (2012) by Sophie Cueille, Entretien insolite avec le facteur Maillard  (can be downloaded as a document)

can (partly) be seen from the street
streetview

Email ThisBlogThis!Share to TwitterShare to FacebookShare to Pinterest
Labels: garden with sculptures from stone, structures of stacked stones