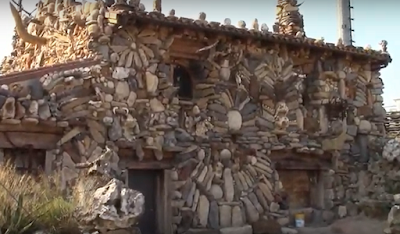 The picture above shows a property in Monteagudo, a small community of some 1100 inhabitants in the province of Navarre, Spain. that in recent decades has been transformed into a singular architecture. with a surrounding space that includes a variety of iron structures.

This Casa del sol naciente (House of the rising sun) has been created by Armando Baigorn, also called Armando Rustigenio. He was born in Aragón in a family with a very creative mother, but spent most of his life in Navarre, where he had a bakery in Monteagudo. 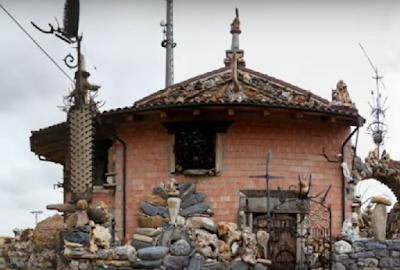 Baigorri might have inherited his creative abilities from his mother, for when he had built a house on a piece of land where there used to be a plaster factory, he began to decorate the house and the surrounding space in an extraordinary way.

Baigorri's decorative work has two distinct perspectives, firstly the often high-rise creations of recycled iron and furthermore the covering of the walls of the house with creatively arranged stacked stones.

The documentation available on the internet has limited information about the artist in terms of years. For example, it is not stated when he was born, nor is it known around what time he started creating the art environment. The picture above depicts the house as it was around 2010. The wall that is visible, is only partly covered with stones, and iron creations can already be seen.

Based on this state of development, it can be assumed that Baigorri started in the early years of the new century, if not earlier. 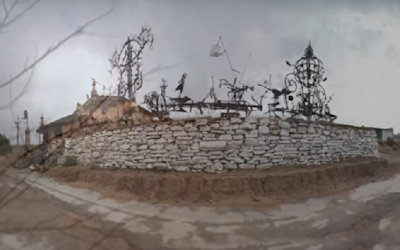 As above picture shows, already in 2010 the outside area was equipped with a large number of metal structures. Baigorri used all kinds of discarded material to construct these metal creations, such as old farm implements, horseshoes, chains, wheels, wrought iron, parts or plows and so on.

One of the larger structures is a ten-meter cross made from more than 4,000 horseshoes, a creation that took Baigorri about two years to complete. 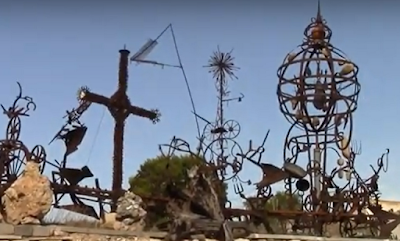 The picture (2016) above gives an impression of the various iron structures Baigorri created. At the left the 10 meters high cross. 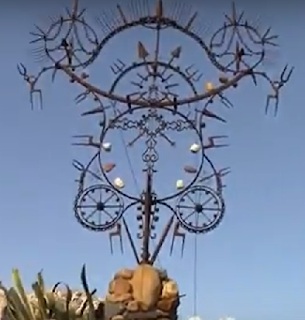 
By decorating the living house with a variety of stones which differ in size, color and form, Baigorri has created a specific singular architecture that's rather unique in the field of art environments in Europe ¹.

There are no other examples where a house, so to speak,  has been encased in a large quantity of stacked stones, which, moreover, are arranged in a decorative manner, such as the flower-like upper left configuration and other arrangements (picture -2016- below). 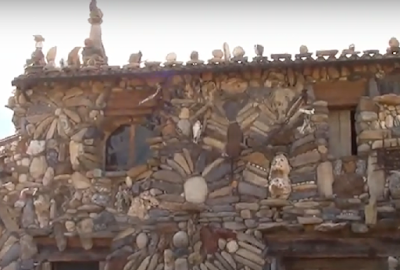 The picture (2016) below shows a fragment of the wall, wherein a round (mill?) stone is placed in the middle of horizontally situated flat stones. 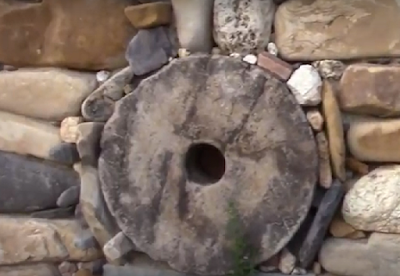 Both with regard to the iron structures and the stacked stone, it appears that what at a first glance seems to be a chaos, on closer consideration is a thoughtful and deliberate arrangement of found stones and recycled materials.

In addition to the two main elements that determine the design of this art environment, namely the stone-packed house and the iron structures in the surrounding space, the site has some smaller-scale items, mainly made from stacked stones, such as an archway, some sculptures and a cave.

note
¹  Other currently existing sites in Europe with built structures of stacked stones (not as bulky as those of Baigorri) are: Michel Rousseau, Garden of lost stones, France and Devan Manfredo, Dreamwoods, Italy. An older site including towers built with stacked stones, currently not existing anymore, is the one by Auguste Bourgoin, Public ruins end of the (19th) century

Armando Baigorri
The house of the rising sun
Monteagudo. region Navarre, Spain
can be seen from the street
Posted by henk van es at 6:35 PM