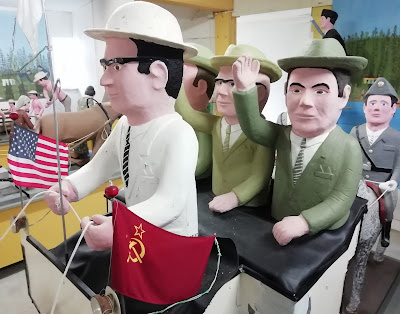 all photos courtesy of Elina Vuorimaa

The community of Kodishoki in southwestern Finland, not far from the coast, was an independent municipality for many years, one of the smallest in Finland with a few hundred inhabitants, until in 2007 the village became part of the city of Rauma..

Along the provincial road no. 2052, a few kilometers north-west of the center of Kodisjoki, one can visit the house museum of Väinö Ylen with a large collection of sculptures. 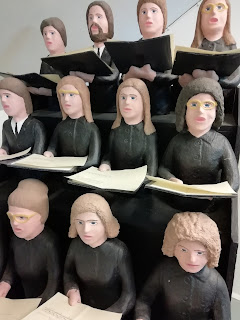 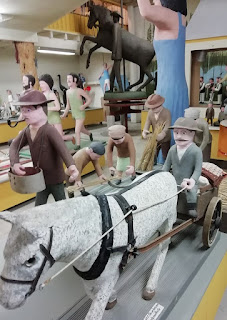 Väinö Ylén was born in Kodisjoki on June 8, 1908 and after his primary school started working as a bricklayer and also as a part-time farmer. He married and with his own hands he built the house where the couple would live for many years 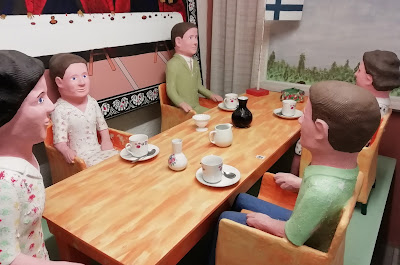 No facts have been reported about the lives of Váinö and Hilma, and there are no reports about certain events that could indicate Ylén's talent for creative activities. It is probably only after his retirement (probably in the late 1960s) that his artistic talent began to manifest.

At a course offered by a civic education institute, he learned to work with plaster, but Ylén soon switched to cement, for him a more familiar material, while he also thought that working with cement was less messy.

Indeed, the photos of Ylén's cement sculptures show that their appearance is far from messy, rather they make a polished, smoothed impression, as if he has applied the surface of the sculptures by hand. By the way, I have not been able to find any data about the technical aspects of his way of working. 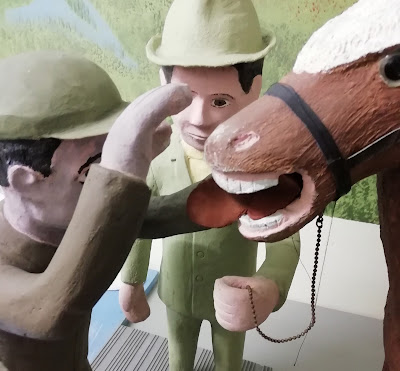 Started around 1971, Ylén made more than 500 cement sculptures in the last decades of the 20th century, mainly depicting human characters engaged in all kinds of activities.

Almost Ylén's entire oeuvre has been preserved on site and this collection is currently exposed in the home museum, both arranged in a shed and in the space around the house

We see famous athletes and well known politicians, but also a ladies' choir, villagers doing all kinds of daily jobs, scenes from ordinary life such as a family at the table, in short, a cross-section of daily life, sports competitions and political developments in the 1970's and 1980's.

Ylén and his wife hadn't a television set in their home and in those years there also was no internet. But through newspapers and magazines he remained well informed of political and social developments, and so various of his sculptures also show events, including political ones, from the last decades of the 20th century. 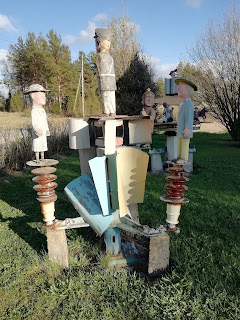 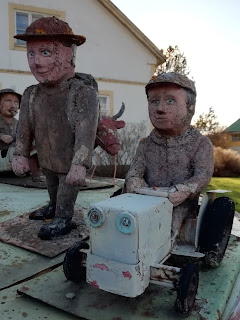 The house where Vainö and Hilda Ylén lived can also be visited, which in itself is an attraction, because the interior has remained as it was during the couple's life. and so it is also an example of the design of interiors in the post-war decades. 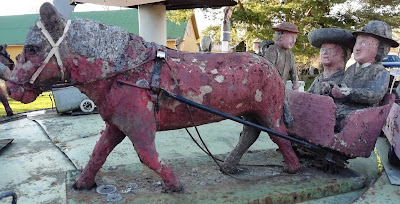 Väinö Ylén
Home museum with sculptures
Kodisjoentie 1535
27310 Kodisjoki, Salakuula, Western Finland, Finland
can be visited (open in July and first week of August on Wed Thu Sat and Sun from 12-16 )
in 2020 opening on June 26

streetview (with pictures of the site)
Posted by henk van es at 10:06 PM

Email ThisBlogThis!Share to TwitterShare to FacebookShare to Pinterest
Labels: garden with sculptures from concrete, indoor arrangement of sculptures