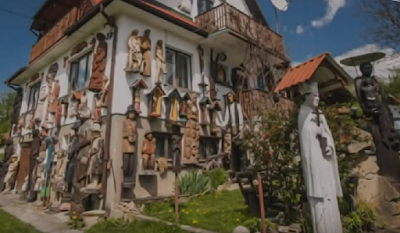 Lizoń's house decorated with wooden sculptures
pictures of the site: screenprints from the video in the documentation

In Rogi, a small rural village located in the south of Poland not far from the border with Slovakia, there is a house referred to as Skansen monumentalnej rzeźby (Open-air Museum of Monumental Sculpture). Not only the house is decorated with sculptures -on the outside and the inside-, the large area around the house is also full of such sculptures. 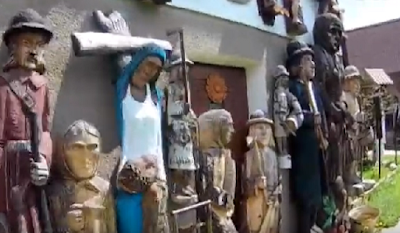 a decorated wall of the house

Born in Rogi in 1949, Józef Lizoń after his primary education took a training to become a  carpenter in nearby Stary Sąc, but in the process he judged making windows and doors too simple and monotonous.

So he decided to focus on wood carving, a decision undoubtedly influenced by the feeling he got after a visit to he parish church of nearby Podegrodzie, where he for the first time in his life saw sculptures in reality.

He thought these sculptures were beautiful and felt inspired to make such creations himself. 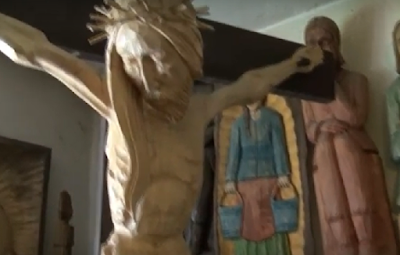 Lizoń  prefers to sculpt in lime, oak and birch, less often in stone, and thematically his religious representations take an important place (the Christ -as in he picture above, situated in a living room inside the house-, crosses, saints, angels, devils).

In addition he has also made many creations that depict people and scenes from life in the Polish countryside (as in the picture below a craftsman with a millstone).

When in 2017 his 50-year artistic career was celebrated with an exposition, Lizoń could look back on a career as a folk artist in which he had made around a thousand (mainly wooden) sculptures Initially, Lizon had to become known. He first worked for an intermediary and made small wooden plates and statuettes, which were sold in souvenir shops.

But then he met someone who provided a permanent sale of his work, in particular realistic sculptures of eagles with spread wings and a crown on their heads, which were purchased by Poles living in America as a souvenir from their home country.

As a folk art artist with a religious approach, he also got commissions. For example, in the course of the years he has manufactured some ten altars for churches in Poland and over a hundred wooden crosses, often some meters high.

In this way Lizoń and his artistic work gradually became known. 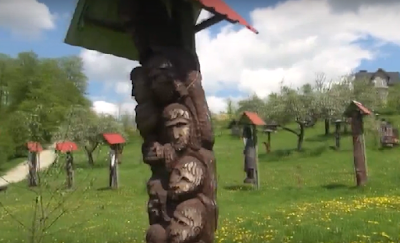 The creation of an art environment started at the end of the 1970s. The actual beginning was when Lizoń placed a large sculpture in front of his house of Polish Cardinal Wojtyla, who was elected Pope (John Paul II) in October 1978.

He then began to add more and more sculpture to the walls of the house and of other buildings on the site, and as the pictures above show, the walls are completely filled with his creations. Incidentally, the same also applies to the rooms indoors.

And then, the area around the house, 1000 m2 in size, gradually became filled with sculptures placed in rows, often covered with a red roof consisting of two roof shields. Such a way of presenting sculptures is taken from a specific model among the wayside shrines (przydrożne kapliczki), a well known phenomenon in Poland. 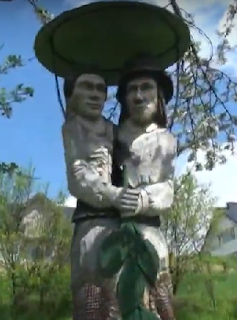 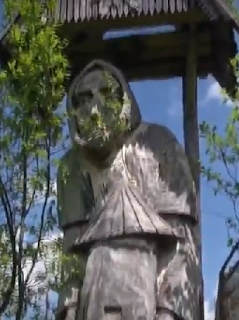 In the 1970s Lizon had already traveled around Poland and had seen open air exhibitions of sculptures elsewhere. In this way he got the idea to make an outdoor exhibition himself.

He described the arrangement of his sculptures between apple and plum trees in the orchard as an open-air museum of monumental sculpture.

For the inhabitants of Rogi, such a use of the space around a house was something entirely new, just as it had happened that the village now housed a museum. 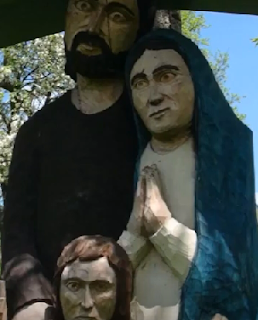 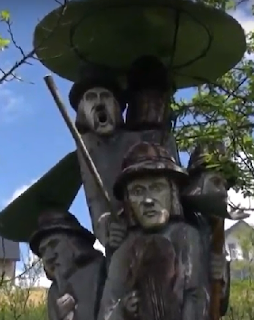 The quartet of images above gives only a limited picture of Lizon's creations in the area around the house.

In addition to a large sculpture of the Christ present in the area and sculptures with a religious character, the other creations often refer to values such as family, motherhood and attachment to Poland. But there are also creations through which he shares his own opinion, like there is a sculpture entitled Babska Wladza (Girls Power). 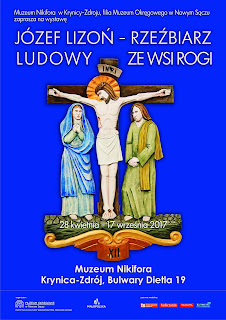 On the occasion of Lizoń's 50-year artistry, the exhibition Józef Lizoń. Sculptor from the village of Rogi was held in 2017 (28/4 - 17/9) in the Nikifor Museum in Krynica

An album about Lizoń was published in 2018 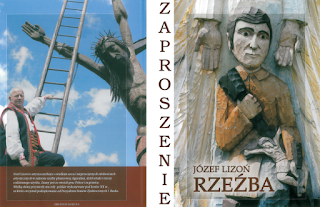 In September 2018 an album entitled Józef Lizoń, Rzeźba (Józef Lizoń, Sculpture). It was presented for the first time during a meeting at the Cultural Centre in Podegrodzie.